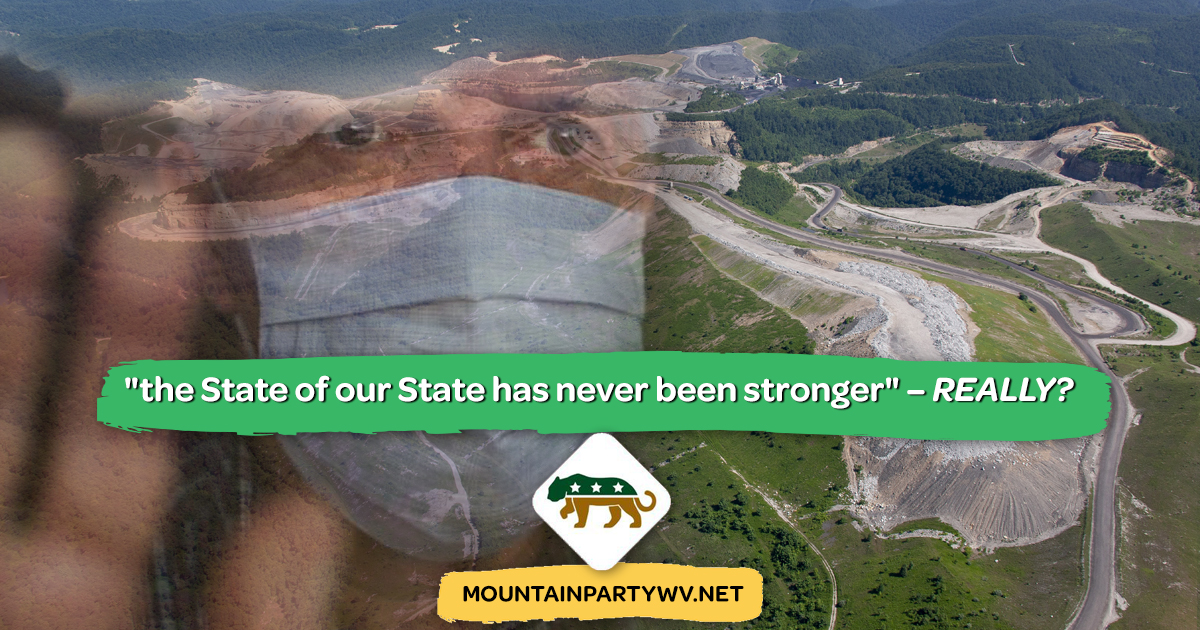 CHARLESTON, WV – The West Virginia Mountain Party rejects Governor Jim Justice’s false claim “that the State of our State has never been stronger.” The contradictory message was delivered in writing to the State Legislature due to the Governor testing positive for COVID-19.

First addressing the matter of the ongoing pandemic, Justice has painted the rollout of the COVID-19 vaccine in West Virginia as a complete success. This is despite his Do It For Babydog sweepstakes being a costly failure unable to effectively incentivize vaccination. To date, West Virginia’s COVID-19 vaccination rate is in the bottom third of all states, despite having the third oldest population (by percent) in the union. As of yesterday, only 55.5% of our fellow West Virginians are fully vaccinated. In comparison this falls below the national rate of 62.6% and the rates of our international neighbors, such as Canada at 77.8% and Cuba at 85.9%.

Justice’s Republican Party and the Democratic Party (which recruited, nominated, and elected him to office in 2016) both remain loyal to the pharmaceutical and for-profit insurance industries. The Mountain Party calls for Single-Payer national health care (Improved Medicare For All), the only solution that will make medical care universal, drastically reduce costs, and save West Virginians and all Americans from financial ruin over a medical emergency. Health care must be recognized as a human right, not a commodity.

Despite the Governor’s claim of a third year of increased pay for state employees, it may actually fail to keep up with the real cost of living. He made no mention of a living wage for workers. The West Virginia GOP pathetically refuses to make even a modest adjustment for inflation for our state’s measly minimum wage of $8.75. No one can adequately provide for oneself on the minimum wage, without relying heavily on others for support.

Conveniently left out of Justice’s State of the State message was the environment. Not a single mention of any issues ranging from the climate, to the state’s increased flooding, to reclamation, and the untapped clean energy potential of geothermal in West Virginia.

Despite praise for a new agreement with GreenPower Motor Company to manufacture electric school buses in West Virginia, Justice has made no commitment to electrify public school buses or any of our transportation systems. Rather he is committed to assuring that West Virginia maintains its punitive fee for electric and hybrid vehicles, which places West Virginia in last place for EV tax incentives. Without much contrast, the Democrat’s own Senator Joe Manchin recently doubled down on his opposition to EV tax breaks, especially in the context of his eager defense of a non-union transnational corporation.

Justice offered no plan to maintain the state’s population from declining in the future. A modest attempt to retain our college educated residents in the state (beyond high-wage union jobs) would be to make student loan interest payments eligible for use as a state tax deduction. While President Joe Biden could easily eliminate all student debt with the strike of his pen, there are many avenues for the state to alleviate some pressure from the student debt crisis.

Nearly a century of Democratic rule in West Virginia culminated in failure. The Republicans have not done better, but rather have continued to sell out the people of West Virginia to corporate exploitation. This is why West Virginia needs a Mountain government to truly represent the working class of the state.