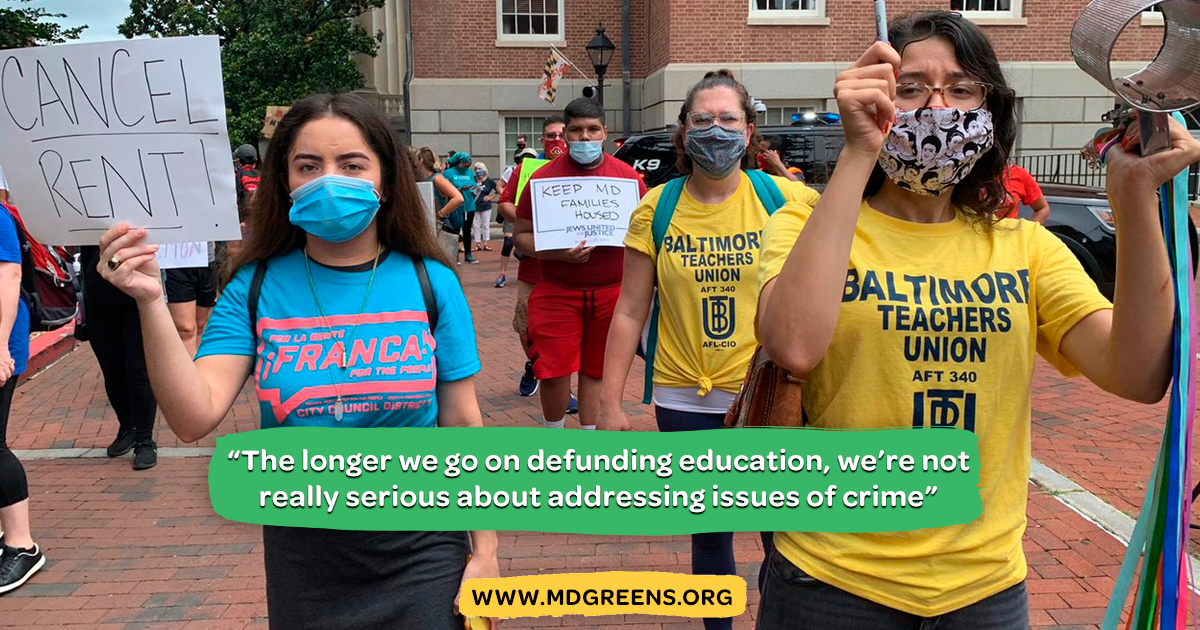 On the first day of virtual school, only a handful of Franca Muller Paz's students logged into her Spanish class. Many just didn't have a way to get online as they isolated at home, the coronavirus pandemic unplugging them from their educations.

As a public school teacher, Muller Paz had an unvarnished view of Baltimore's inequities long before COVID-19 hit. Even when she could teach students in person before the pandemic struck last spring, her classrooms didn't always have functional heat.

A community organizer and an immigrant, Muller Paz is funneling her experiences into a potentially historic campaign for City Council. She's challenging Democratic City Councilman Robert Stokes in the Nov. 3 election, and hopes to become the first Green Party candidate to win a seat in City Hall.

"There's so much work that needs to be done," she said, arguing that the status quo isn't working for the voters of District 12, which includes areas of Central, East and North Baltimore.

For decades, Democrats have held every office in Baltimore government and their primary was considered the only contest that mattered.

Even this year, there are six Democrats running unopposed for council seats in the general election. And in the other eight council races, each Republican challenger has less than $1,600 in their campaign accounts and are not considered threats.

Muller Paz's campaign, meanwhile, had more than $40,000 in the bank, according to the latest disclosure, and has raised much more since. She's endorsed by the Democratic Socialists of America, Baltimore Women United and two of the unsuccessful Democratic candidates from the primary. She nabbed her biggest endorsement Tuesday: the Metro Baltimore Council AFL-CIO Unions, marking the first time the council has backed a third-party candidate.

Her largest public contribution so far, according to her Aug. 25 form filed with the state, is $1,000 from the Green Party, and she pledged not to take any corporate money.

Stokes was considered the most vulnerable council incumbent in the primary. In a fractured field of six, he secured 40% of the electorate, beating his closest rival by 248 votes.

While a first-term councilman, Stokes has been a longtime presence in City Hall. He was a legislative aide to then-Councilman Carl Stokes (they're not related), worked for then-Mayor Kurt Schmoke, former City Council President Lawrence Bell and U.S. Rep. Kweisi Mfume, among other local officials. All are Democrats.

Stokes ran on a slate this spring with Democratic Mayor Bernard C. "Jack" Young, and is one of the outgoing mayor's closest allies on the council.

Stokes argues he's been a visible and trustworthy representative of his district. He points to accomplishments during his first term, including opening a swimming pool in the Oliver neighborhood in East Baltimore and helping bring funding to community organizations that had been ignored.

He said he's not worried about his well-funded challenger.

He said he wants to finish the work he's started, including pushing for expanded apprenticeship programs at public high schools.

The GOP nominee in the race is Eugene Z. Boikai.

It's an uphill battle to challenge an incumbent in Baltimore, where registered Democrats outnumber registered Greens by more than 200 to 1. It could be especially hard this year as the pandemic makes grassroots organizing more difficult, and the Democratic Party stresses unity to push Republican President Donald Trump from the White House.

But unlike other election years, the local Green Party is concentrating on securing a single seat in City Hall. In 2016, it ran seven candidates in Baltimore, including Joshua Harris, who won 10% of the vote in the mayor's race.

"The party has developed a lot of capacity amongst volunteers and members, but I don't think it has the capacity to simultaneously support seven races," said Andy Ellis, a party leader. "It does have the capacity to really focus on one race, and one race with a very strong candidate."

If Muller Paz, 32, can pull it off, Green leaders say that could open the doors for other local runs. Ellis said future candidates could include some people who share Green Party values but currently are Democrats because they don't think a third party can win.

Greens across the state are paying attention and volunteering with the campaign.

"If we break through," Ellis said, "it makes general elections matter in deep blue and deep red jurisdictions."

Muller Paz's campaign is building momentum and is seeing support in many corners of the district. Her pink and blue campaign signs — which read "for the people" in English and Spanish — pepper its neighborhoods. She lives in Mount Vernon in Central Baltimore.

More than 300 volunteers make calls to voters and spread her campaign literature around the district. They've gotten creative about how to canvass neighborhoods in the age of social distancing, standing 10 feet from a person's front door and wearing masks under face shields.

Every Sunday, she hosts an outdoor concert and highlights local artists. Recently, she and her volunteers set up at Clifton Park. Between sets, Muller Paz shared her progressive platform.

She pledged to push for divestment in the Baltimore Police Department, with the goal of shifting hundreds of millions from its budget and toward housing support, mental health programs and youth services.

"Are we really taking the issue of crime seriously?" she asked the crowd. "Because the longer we go on defunding education, we're not really serious about addressing issues of crime."

Among the items on Muller Paz's platform is a minimum wage of $15 per hour for people working in Baltimore that would automatically rise with inflation and include workers younger than 18.

The Maryland General Assembly passed legislation last year that will gradually increase the state's minimum wage to $15 an hour over the next five years. Muller Paz said it doesn't go far or fast enough.

She also thinks the City Council didn't push hard enough for a $15 minimum wage several years ago. Then-Democratic Mayor Catherine Pugh vetoed the 2017 legislation, and the council didn't have enough votes to override her.

Stokes was among the members who did not sign onto to the attempt to override Pugh's veto. He said Tuesday that while he supported the original legislation, the council didn't have enough votes to override Pugh.

If she wins, Muller Paz, whose family immigrated from Peru, would make history in another respect. Along with Odette Ramos, the Democratic District 14 candidate favored to win over Republican Charles Long, they would be Baltimore's first elected Hispanic leaders.

Muller Paz wants to push for more translation services in City Hall. Also on her agenda are a variety of issues over which the City Council has no direct power. She supports legalizing recreational marijuana, decriminalizing sex work and allowing voters to elect all members of the city school board.

"I'm used to having to exert power over things that I don't have any power over," she said, pointing to her history as a community organizer. "I think it's really important to see our power as advocates within the City Council.

"To be a city councilperson is to have a tremendous megaphone."

She's trying to do that now, through her advocacy work around connectivity for students during the pandemic. Muller Paz and the student advocacy group she advises at Baltimore City College teamed up with Democratic City Councilman Zeke Cohen to pressure Comcast to expand internet access to low-income residents.

Her previous partnership with council Democrats could help Muller Paz. The council has been trending younger and more liberal in recent years, and some of the more progressive members shared on Twitter the Green Party's petition to ensure its candidates had a place on the 2020 ballot.