Replace the Middle Class with the Mutual Class, says Candidate for PA Governor 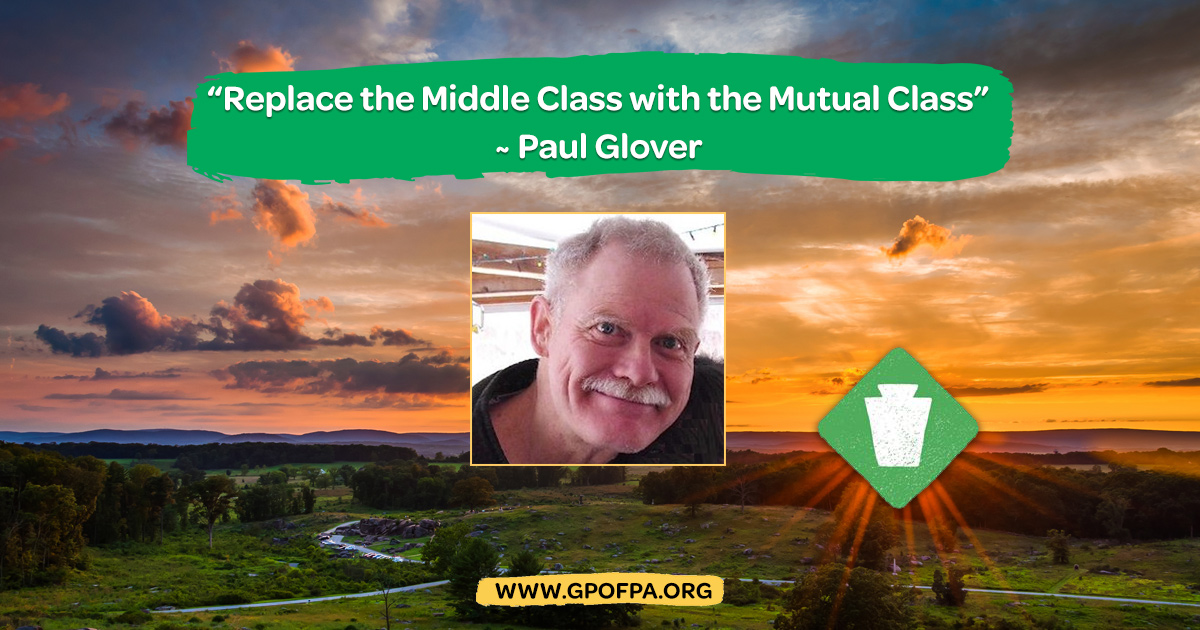 The Green Party of Pennsylvania (GPPA) has nominated community economic developer Paul Glover as its 2018 candidate for Governor of PA. Glover says, "The struggling middle class can escape treadmills of debt by uniting to become a powerful mutual class."

"Pennsylvania's middle class is struggling, no matter how hard they work. While good jobs evaporate, banks foreclose and rents rise," Glover explained, "We're a rich state with a lot of poor people. Yet there are many solutions to these problems."

"Pennsylvania's middle class is struggling, no matter how hard they work. While good jobs evaporate, banks foreclose and rents rise," Glover explained, "We're a rich state with a lot of poor people. Yet there are many solutions to these problems."

Glover proposes that middle class and poor citizens collaborate to create what he calls the "mutual class," by joining member-owned organizations that will enable them to live well with less expense. He explains, "Just one hundred years ago, hundreds of such member-owned organizations built hospitals, old folks' homes, orphanages and recreation centers. They owned farms, made interest-free loans, and paid sickness and death benefits. Membership cost pennies per week."

Glover would shift the state budget to strengthen mutual aid organizations and co-operatives currently serving our state. He would establish a PA State Bank to prioritize small businesses that create green jobs by investing state tax revenue and pension funds. "Commercial banks that make predatory loans or send our jobs abroad should not hold our taxes," insists Glover. "The PA State Bank would make loans that strengthen local communities."

He also encourages formation of "import replacement programs," which will ensure that PA-based enterprises are at the table when state or corporate contracts are offered.

Glover also advocates formation of community currencies. He was founder of Ithaca HOURS local currency, a local cash system that has traded millions of dollars value among thousands of residents and 500 businesses in Ithaca, NY. "This is money with a boundary around it," he says, "which encourages trade, trust and cooperation."

Glover is author of the books "Deep Green Jobs" and "Green Jobs Philly," which detail how to create 100,000 green jobs in Philadelphia. "Philadelphia has a 26 percent poverty rate and a 38 percent high school dropout rate," he notes. "These people will not likely get STEM jobs. We need to create "stem" jobs, constructing greenhouses on our vacant lots, planting orchards, installing solar panels, removing excess paving, building low-cost tiny houses, and so forth."

Paul Glover is founder of the Philadelphia Orchard Project (POP), and more than a dozen other green organizations, PhilaHealthia medical co-op, and Citizen Planners of Los Angeles. He is author of five additional books on community economic development. Glover taught urban studies at Temple University, and ecological economics at Philadelphia University.