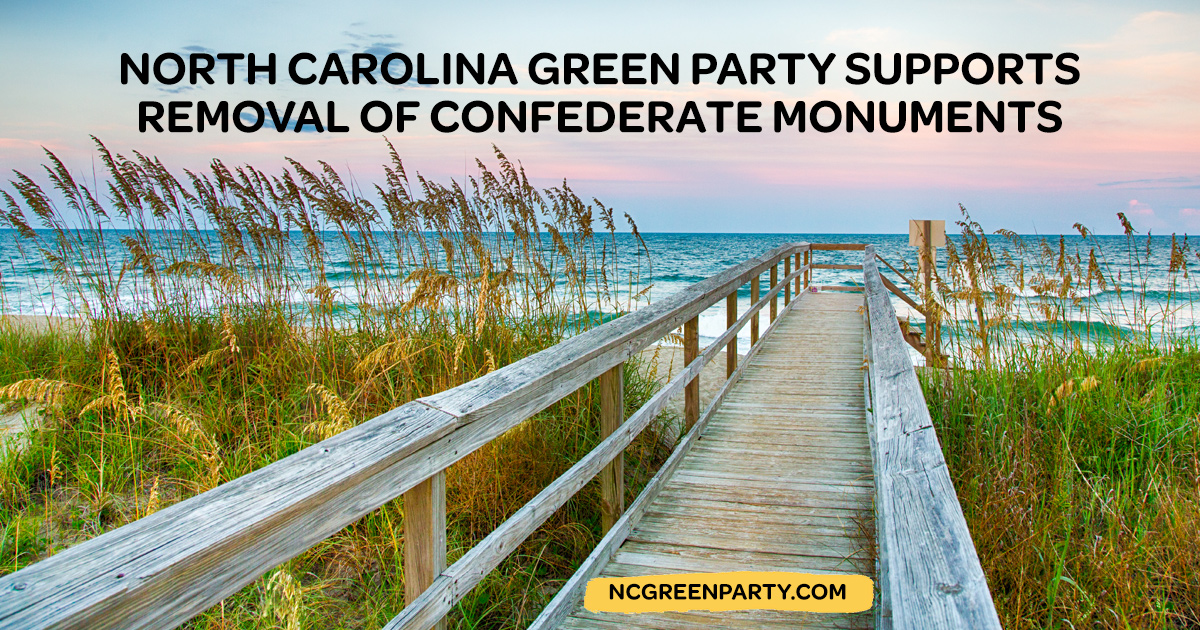 The North Carolina Green Party (NCGP) stands in solidarity with Durham protesters who removed a Confederate statue at the old Durham County Courthouse on Monday, August 14, as well as with those who have been subsequently arrested and whose homes have been raided in retaliation by police.

The NCGP encourages supporters to send donations to bond funds such as the Durham Solidarity Center’s "Freedom Fighter Bond Fund" that cover bail and legal fees for protesters in such situations.

The Green Party of the United States platform calls for removal of Confederate symbols and monuments. "The forcible removal of public monuments that celebrate the United States’ racist, violent slaveholding history is not itself violence. That history and those monuments are the true violence at work here," said NCGP vice chair Michael Trudeau. "We should be worried when people and the state are more concerned with so-called violence against inanimate objects than they are about the violence of slavery and the continued institutional racism against real people embodied in these monuments and symbols."

NCGP member Camille McCarthy added, "Even Robert E. Lee disapproved of these Civil War memorials. They were a slap in the face to freed slaves and a sign that the Union would rather make peace with secessionists than see racial equity. They are still a rallying point for white supremacists and as such must be taken down."

The Green Party espouses nonviolence as one of its key tenets, and in light of the Durham protest, NCGP secretary Tommie James pointed to the words of Martin Luther King in Letter from Birmingham Jail: "Nonviolent direct action seeks to create such a crisis and foster such a tension that a community which has constantly refused to negotiate is forced to confront the issue. It seeks so to dramatize the issue that it can no longer be ignored."

The NCGP supports the careful, planned removal of such monuments by the community as in Durham on August 14, especially when it is evident that the state will not remove them. "The state of North Carolina codified a pernicious little law that makes it impossible to remove monuments like this legally," said NCGP co-chair Jan Martell of Durham. "For now, this kind of direct action is the only way and will draw attention to the need for the state to reverse its infringement on our municipal rights, including the right to be free of these oppressive symbols."

"White Americans need to confront our country’s history," added vice chair Michael Trudeau. "These monuments have been allowed to stand thus far because too many white Americans do not take our criminal history of slavery seriously enough to see why they need to come down. That itself is more perpetuation of white supremacy."