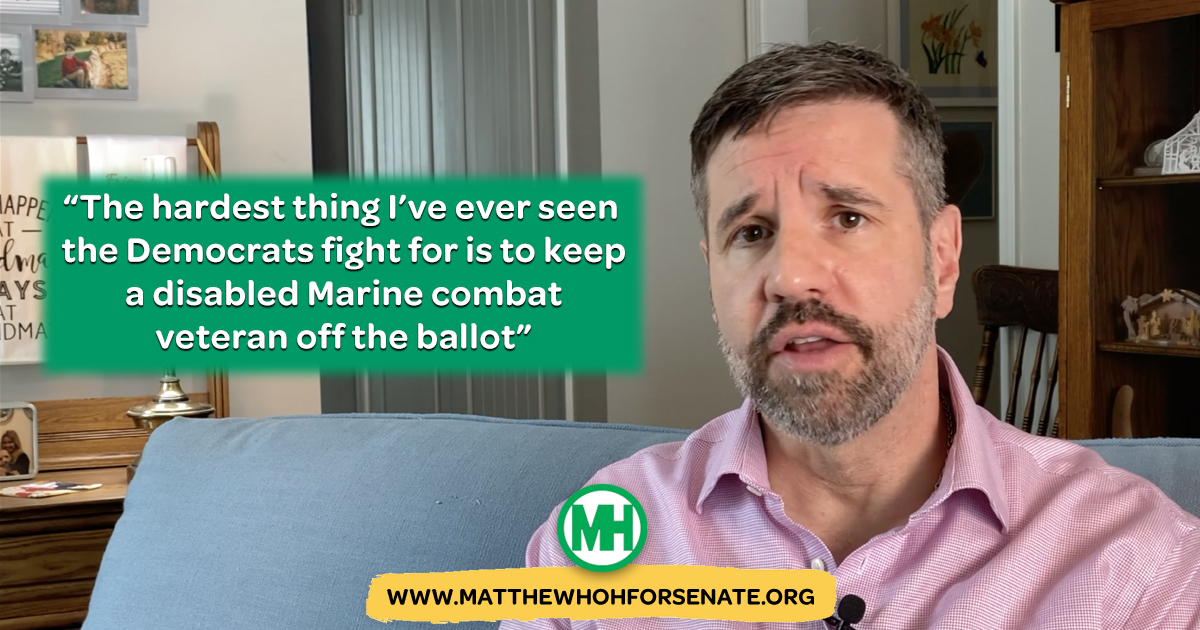 The North Carolina Green Party's presumptive U.S. Senate nominee accused the state's Democratically-controlled Board of Elections of "a corrupt, lawless, and blatantly partisan attack on democracy" after it voted Thursday against certifying Green Party's petition for its candidates to appear on the November ballot.

"It's a slap in the face to the thousands of people who signed, to our grassroots organizers who worked tirelessly to collect thousands of signatures during an ongoing pandemic, and to everyone who believes in democracy itself," Matthew Hoh, a longtime anti-war activist, said in a statement.

All three Democratic members of the state election board voted against certification of the Green Party while the body's two Republicans voted in favor.

The board said after the vote that it opted "not to recognize the Green Party as an official political party in North Carolina" due to "an ongoing investigation into evidence of fraud and other irregularities in the petition process used to seek ballot access for the party."

The board acknowledged that the Green Party obtained more than the required 13,865 valid signatures for formal recognition, but it claimed that "several counties and state board staff identified numerous irregularities." Hoh said the Green Party received 15,953 verified signatures.

Allegations that the Green Party committed fraud in the signature-collection process have come primarily from the Elias Law Group, a firm that serves as general counsel for the Democratic Senatorial Campaign Committee (DSCC).

The Carolina Journal reported Thursday that shortly after the Green Party submitted the signatures it had collected for ballot representation, "the Elias Law Group was able to get the names and addresses of those who signed through a public-records request."

"These Green Party supporters were then repeatedly called, texted, and visited at home by Democrat operatives and asked to sign forms to renounce their earlier signature of the petition," the Journal noted.

Hoh provided the outlet with a recording of one call in which a person claiming to be a volunteer for the Green Party presses a signatory on whether they "strongly supported" the party's effort to get on the ballot. The person then proceeded to read off a script used by DSCC callers claiming that Republicans would have a "huge advantage" if the Green Party made it onto the ballot in November.

The Journal interviewed a separate Green Party supporter, Janet Nagel, who "said she also received misleading, harassing calls" from "a woman who represented herself as with the Green Party."

"It seemed illogical," said Nagel, who told the caller that "people who would be voting for the Greens were not going to be voting for the Democrats," so getting the Green Party on the ballot would not provide any meaningful boost to the Republicans.

"Then, as a non sequitur, and this was the part that really concerned me, [the caller] said, 'So would you want to remove your name from the petition?'" Nagel added.

In response to the calls, Hoh said that "the hardest thing I’ve ever seen the Democrats fight for is to keep a disabled Marine combat veteran off the ballot."

Please watch yesterday's hearing where we were denied party certification by the NC State Board of Elections in a brazenly partisan manner. Most disturbing, among several concerns to me, was the lack of due process. #ncpol https://t.co/Ug2Go8zOqc

While Hoh vowed Thursday to fight the decision, the board's vote against certifying the Green Party likely means its candidates will be barred from appearing on the November ballot—the deadline to get candidates on the ballot is today, July 1.

Karen Brinson Bell, executive director of the North Carolina State Board of Elections, said during the body's meeting Thursday that "we feel like there is a cloud over how many signatures are valid."

"There's just a lot of concern around what we're finding," Bell added.

As the local News & Observer reported Thursday, "Board of Elections staff gave a presentation in which they argued the petition sheets submitted by the Green Party showed several 'obvious signs of fraud.' Among these, the staff said they had witnessed similar signatures, partial dates of birth, and deceased voters being included in petition sheets."

Hoh countered that the board never gave a sensible justification for its refusal to certify the Green Party's 15,953 verified signatures.

"I don't want to get into the details of a criminal investigation, but I have questions sufficient in number to not be willing to vote for certification today," Circosta replied.

When Hall asked again, Circosta had him muted.

Following the meeting, News & Observer notes, "a spokesperson for the State Board of Elections later clarified that the investigation was currently internal, and any criminal findings would be referred to law enforcement following the board's review."