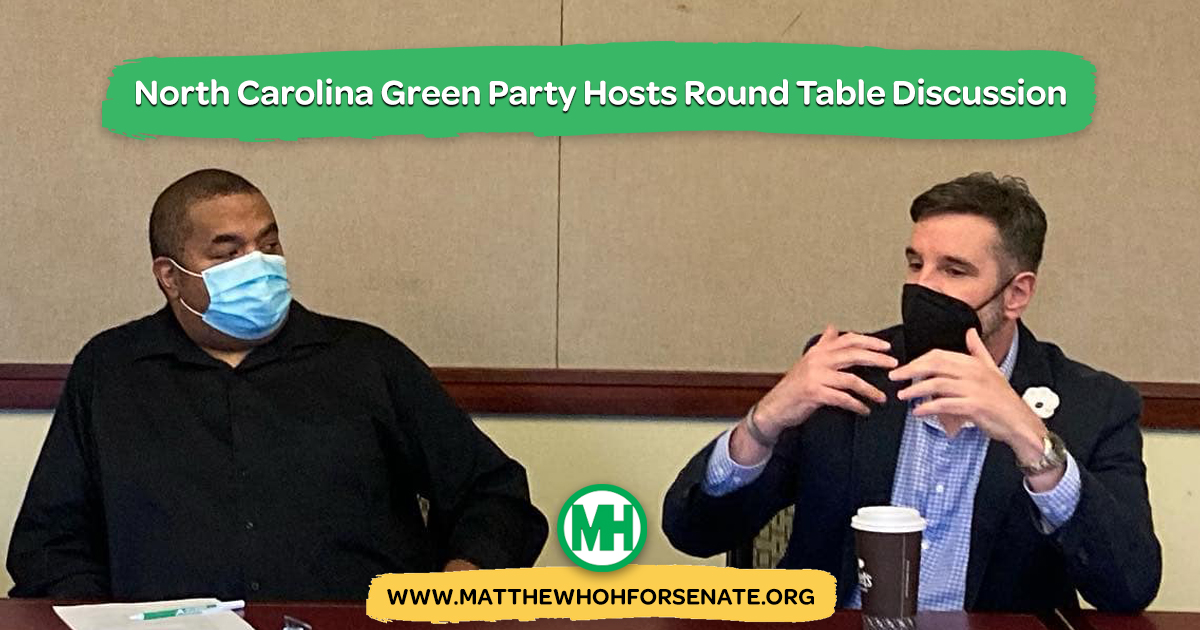 On Friday March 4th, conversations regarding climate justice and the two-party system took center stage in the Union's Morcott Room. The North Carolina Green Party senate candidate, Matthew Hoh, and NC Green Party co-chair, Tony N'dege, spoke about their experiences with American politics and their foray into activism. The Green party brands itself as an "alternate party," apart from the dominant Democratic and Republican parties. It focuses on addressing environmental issues and the inequities that they cause through a model of grassroots activism.

Unlike most guest speaker events, the conversation was set up as a roundtable discussion. As students and community members filed into the room, Hoh emphasized his desire for open-minded dialogue, and proceeded to ask attendees about their majors, hometowns, and class years.

"You all get lectured at enough [as students]…I'm not sure how much you all will get out of, but we will gain a lot," said Hoh.

Both N'dege and Hoh discussed their long careers in activism. They both started at the grassroots level and progressed to become leaders in the Green party.

Hoh underscored the importance of having third parties in a Democratic society. He explained that, in a two-party system, the main two parties would stretch too far to cater to people with drastically different ideologies. He felt that this would force people to bargain with their beliefs.

"Third parties provide more of a focus on the issues, fostering issues-based campaigning and issues-based elections, which means people go to the ballot box and not compromise their values," said Hoh.

Expanding on Hoh's point, N'dege said, "We need parties like in France, and in many other countries with genuinely organized stronger unions, [which means] more unions to fight against cutbacks."

When asked about what an ideal America would look like, Mattie Baird '25 chimed in.

"We need to address the prison-industrial complex. There is complete lack of empathy in how the country treats other countries and people within the country," said Baird.

When concluding the event, Hoh applauded the attendees and their open-minded outlook.

"I'm very touched [by this conversation]… [you all had a] lot of compassion and empathy, everything said was about other people— people you don't know," said Hoh.

While most attendees were Davidson students, a few community members came to the discussion table. Among them was Grant Mitchell, a music student at Central Piedmont Community College. Mitchell described himself as a newer member of the Green party and enjoyed the event.

"[The] Discussion was great, I was loud and outgoing, and [everyone] gave me an opportunity to be at the center of the room," said Mitchell.

Additionally, not all of the attendees were supporters of the Green party. Many attendees identified with other political groups, including Jack Magner '23.

"While I am not a member of the Green Party, I personally thought the event was great! It was nice meeting Matthew and Tony and I appreciated how they incorporated students' perspectives and beliefs into the event," said Magner.

In the lead-up to the fall and an important election season, the Center for Political Engagement (CPE) has focused on bringing a wide range of candidates from across the spectrum. Hoh was the second major senate candidate to visit campus this year, after former Democratic contender and State Senator Jeff Jackson came in the fall.

Magner is also a member of the CPE executive board; he discussed the process of bringing candidates to Davidson.

"The ongoing redistricting process has made it a bit more difficult to consistently schedule candidate visits. Because the maps have constantly been changing, the filing period for candidates closed on March 4th (originally planned for December 2021). Now that we know who's running and where, bringing candidates will hopefully be much easier," said Magner.

"We have very smart people on this campus with ideas for a better world that don't conform to the Republican-Democrat binary. I hope that this event sets a precedent of being able to create space for more political diversity on campus," said Skolar.

Looking ahead to this fall, midterm elections will have a long-lasting impact on state and national politics. N'dege made a call to action by contextualizing his activism within the rise of Gen Z and ongoing world events, such as the COVID-19 pandemic.

"These points in history are going to be important and you all are going to be a big part of it," said N'dege, "Go to those who need your allyship, a lot of great things have happened when people stood up for themselves."