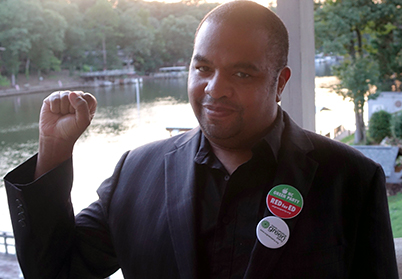 Tony Ndege (the ending of his last name sounds a lot like reggae), presently also serves as Co-chair of North Carolina Green Party. For over two decades, Tony has organized from the local to international level for social justice, labor justice, the rights of immigrants and the undocumented, against war and military intervention, against the US embargo on Cuba, and against water contamination from coal ash and pollution. He has worked as a lead organizer for a wide range of major movements and events locally and nationally: from organizing #BlackLivesMatter actions events to Occupy Wall Street, from co-organizing the largest-ever protests against Duke Energy (one of the largest polluters in the nation), to uplifting the demand to make energy publicly owned, and from organizing protests and events standing up to Bank of America and Wells Fargo's criminal malfeasance to the largest statewide and national actions against the second Iraq War.

Tony's experience with the Green Party US began as an Occupy Wall Street activist and co-organizer of the DNC protests in Charlotte in 2012, where he first met 2012 Presidential candidate Jill Stein. Subsequently, he participated in Global Climate Convergence as a lead co-organizer for two events in his state. In fall 2015, in cooperation with Bruce Dixon and the North Carolina GP leadership, he co-organized a four-city cross-state tour for Dr. Jill Stein. Tony eventually became the North Carolina Ballot Access Coordinator and later the State Volunteer Coordinator for the Stein/Baraka campaign. Later, he had the honor to serve as Mid-Atlantic regional coordinator for the Stein/Baraka campaign, where he had the opportunity to meet and collaborate with thousands of Greens and supporters across the region. Subsequently in 2016, Tony was elected co-chair of the NC Green Party. Tony also serves on the GPUS Ballot Access Committee as the Southeast Regional coordinator, and he is a member of the Green Party Black Caucus and Lavender Caucus.

When serving as North Carolina Volunteer Coordinator for Jill 2016, NC Greens achieves historic election results for Stein/Baraka as write-in candidates, including the highest number of write-in votes for a Presidential candidate in North Carolina history. They accomplished this success via meetings with supporters in every major city in NC, and thanks to fantastic volunteer organization and personal motivation of so many NC supporters! This write-in campaign results were a major factor in passing legislation in fall 2017 that dramatically lowered our ballot access signature requirements from over 94,000 to about 12,000 signatures. As a result of these new laws, the North Carolina Green Party was able to achieve ballot access for the first time ever. It has become the first progressive or left party to achieve North Carolina ballot access in over 37 years! In less than three months after winning ballot access, NCGP interviewed several prospects and successfully recruited 4 strong candidates for the 2018 Elections ranging from US Congress to Soil and Water Supervisor and intends to build upon this success next year.

During Tony's tenure as state co-chair, NCGP has grown from one functioning local to five region-wide locals, with plans to add more over the next year. NCGP has successfully restructured the state party into a dues-paying organization while significantly increasing membership. NCGP has co-organized several events, such as helping coordinate a statewide tour of Dr. Margaret Flowers and a presentation by Ajamu Baraka for its 2017 Spring Gathering. As a founding member of his new regional local, Triad Area Greens, Tony worked on its first electoral campaign, (CJ Brinson for Greensboro City Council), where he served as a fundraiser and assistant campaign coordinator

Tony presently resides in Winston-Salem NC, works in the public school system and will be heading back into the IT field. He also has experience in music, film production, and directing. Tony holds degrees and diplomas from UNC Greensboro and North Carolina School of the Arts conservatory.

Tony is extremely humbled to serve on the GP US Steering Committee where he hopes to increase the party's profile to new communities, improve workflow and volunteer participation, improve state ballot access retention, and foster radical political education for the public.