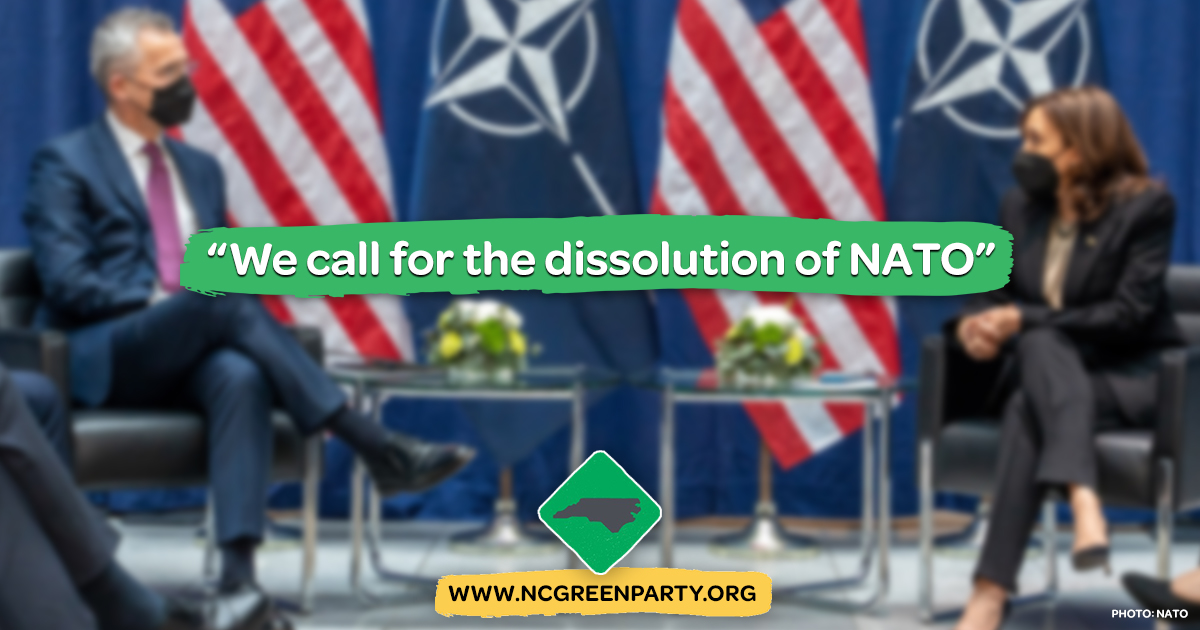 PITTSBORO, NC - The North Carolina Green Party stands for an immediate ceasefire in Ukraine. We call for the United States and other NATO powers to begin immediate peace talks with Russia towards a return to the terms of the 2014 Minsk Protocol. NATO forces have made incursions into the region for decades. The overthrow of Ukraine’s democratically elected government in 2014 happened with the direct involvement of US diplomats. These aggressions have led to Russian security concerns and have inflamed and destabilized the situation in Ukraine.

Because of this we call for the dissolution of NATO altogether. NATO serves to maintain global subjugation and dominance of all nations on behalf of the European Union, the United Kingdom, and the US, as well as their wealthy beneficiaries. This has resulted in more global destabilization, not peace building. We call for all people of good conscience to take a stand and resist these dangerous escalations and against the deliberate policy of interference in the region by US and NATO leadership. Instead of pouring trillions in resources into military contracts with no benefit to the vast majority of people, we must instead build a new society based on providing healthcare for all, good sustainable jobs for all, including veterans, guaranteed quality housing, and access to healthy food, water, and other necessities. The needs and progress of people, peace, and the planet must come before the profit of the few and wars for limited natural resources.

To that end, the North Carolina Green Party also calls for an end to the US’s continuity of aggressive foreign policy toward Russia and other nations. This continuity of US foreign policy has been bipartisan, by both the Democratic and Republican Parties. The North Carolina Green Party calls for building a mass party founded in ecological socialism, and supported by the pillars of global peace, social justice, racial justice, and environmental justice.