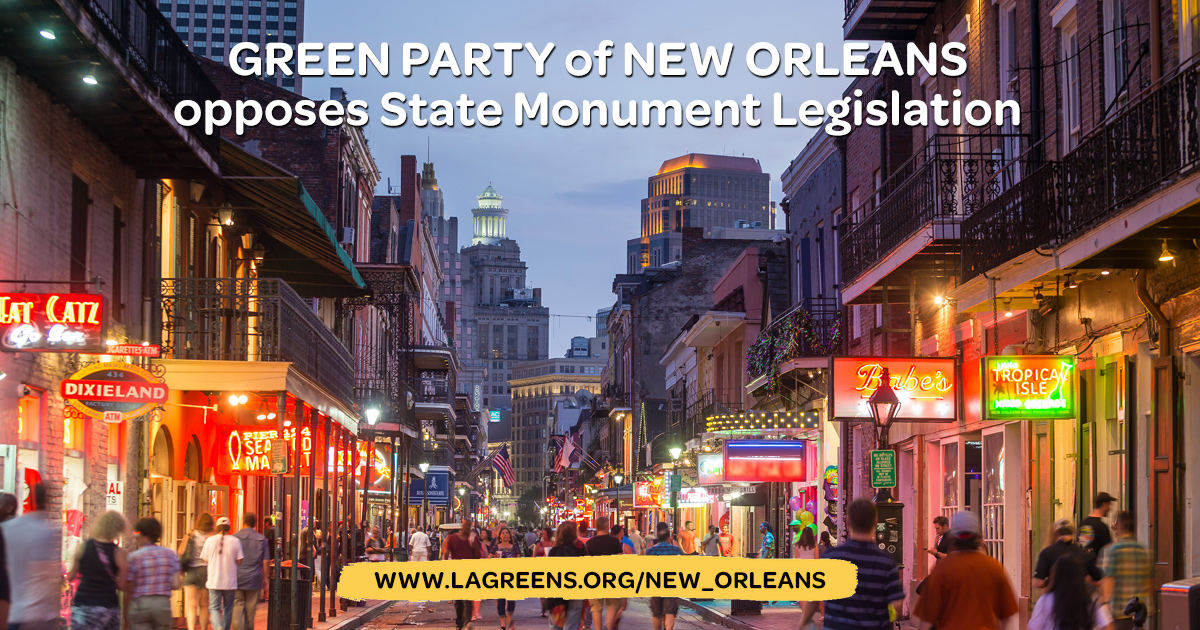 The Green Party of New Orleans decries current efforts of the state legislature to impede the removal of Confederate monuments from our local streetscape.

"The Green Party finds that local grassroots governing best serves communities," said Anika Ofori, a Green Party of New Orleans organizer and member of the Green Party of the United States Black Caucus. "Recent events reveal the psychological significance of these confederate monuments very clearly. Removing these monuments to a place where their history is recognized, as Confederates, can be achieved in an appropriate location."

The fight to have such monuments removed is decades long. In 2015, the will of the people and the will of our municipality converged into an overwhelming vote to remove. These monuments were deemed public nuisances and declared to no longer represent the values the city wishes to achieve in our future.

Legislative opposition, just as the final plans for removal are implemented, shows how important it is for the city to continue with the removal. The state legislature's attempt to block the removal of the statue of Robert E. Lee meddles in our city's concerted resolve to remove public exaltation of the crime of slavery.

Given the Legislative Black Caucus' walkout from this process, this legislation creates the specter of largely white legislators' foisting racist laws on the state's largest city, which also happens to be majority African American.

"Sadly, this is nothing new," said local party member David Bryan. "It is clear that the state legislature identifies with monied interests at the expense of the state's most vulnerable and largely African American citizens."

In 2002, New Orleanians approved a referendum increasing the city's minimum wage by one dollar over the federal minimum wage, and the state promptly outlawed this modest pay increase for some of her poorest citizens. In 1998, New Orleans' then-mayor Marc Morial filed a class-action lawsuit against gun manufacturers for the gun violence plaguing the city. Despite a decade of record-setting murders in New Orleans, Louisiana's legislature sided with the gun manufacturers over the interests of her own citizens and passed legislation that retroactively stopped the lawsuit.

"We are alarmed at the continued attempt to abrogate and override local municipal control," said Ryan Hargis, Secretary of the Green Party of Louisiana. "The decentralization of political power is a key value for Greens. Decision-making must remain with the communities most affected by the decisions."

CALL TO ACTION:
We urge all Greens in Louisiana, and any residents who care about these issues, to contact their senators and urge them to oppose House Bill 71, House Bill 292, Senate Bill 198, and any other bills which would impede the will of the people in removing monuments to white supremacy.

Find your legislators via the Louisiana State Legislature website.