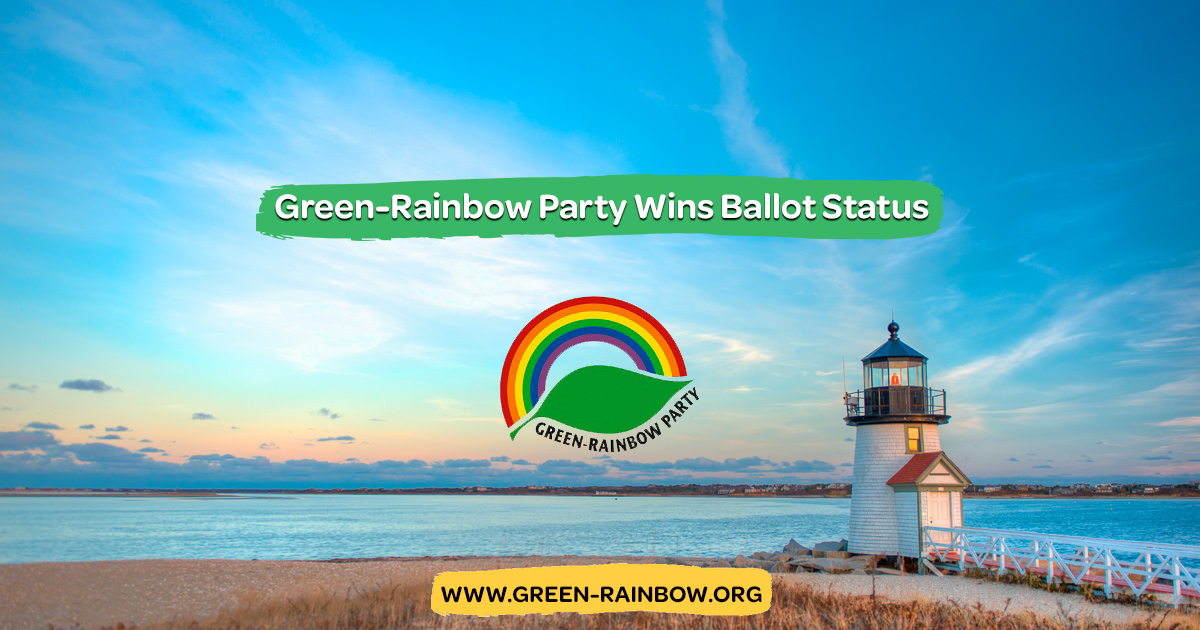 We are pleased to announce that in the November 6th statewide election, the Green-Rainbow Party (GRP) statewide candidates earned enough votes to be formally recognized as an official party in the state of Massachusetts. The GRP expects to receive its elevated status later this month once the results are fully certified by the Secretary of the Commonwealth. Altogether, more than one hundred thousand voters chose Green-Rainbow in this election.

"I think people are tired of fear-mongering and the failings created by today's divisive two-party system," said Juan Sanchez, the GRP candidate for Secretary of State and the first Puerto Rican to qualify for inclusion on the state ballot. "In Massachusetts, voters are extremely independent-minded. They really responded to our inclusive, grassroots campaign and my progressive stance on voter and election reform."

"On the campaign trail, I met a lot of voters looking for a party that truly reflects their values – a world where PAC and corporate money doesn't dwarf any individual's vote," stated Jamie Guerin, the GRP's candidate for State Treasurer. "The Green-Rainbow Party has always sided with the 99% and we strive to address the growing social and economic inequalities inherent in the current political system. We live to challenge the status quo, champion peace, save the planet and create a better world for our children."

"I ran for State Auditor on the Green-Rainbow ticket to be an independent watchdog over state agencies, spending and unfunded mandates," said Edward 'Jed' Stamas. "It is time to hold Beacon Hill to a higher standard for critical initiatives such as health care, education, housing and more."

With 99% of the vote reporting, both Sanchez and Guerin received more than the 3% of the vote required for official party status in Massachusetts. In their three-way races, they were chosen by 3.8 % and 3.5% of the electorate respectively. Stamas, in a 4-way race, won 2.6% of the vote.

"I think the GRP state house candidates received so many votes because there is no excusing the actions of the current politicians funded by big money donors. Although the state house is 80% Democrat with a veto-proof majority, they have refused to pass legislation guaranteeing health care and housing for all, halting climate change, ensuring safety for undocumented immigrants and creating equity in education," said Factor. "The average person knows that we can do much better with GRP candidates who are not beholden to corporations and PACs."