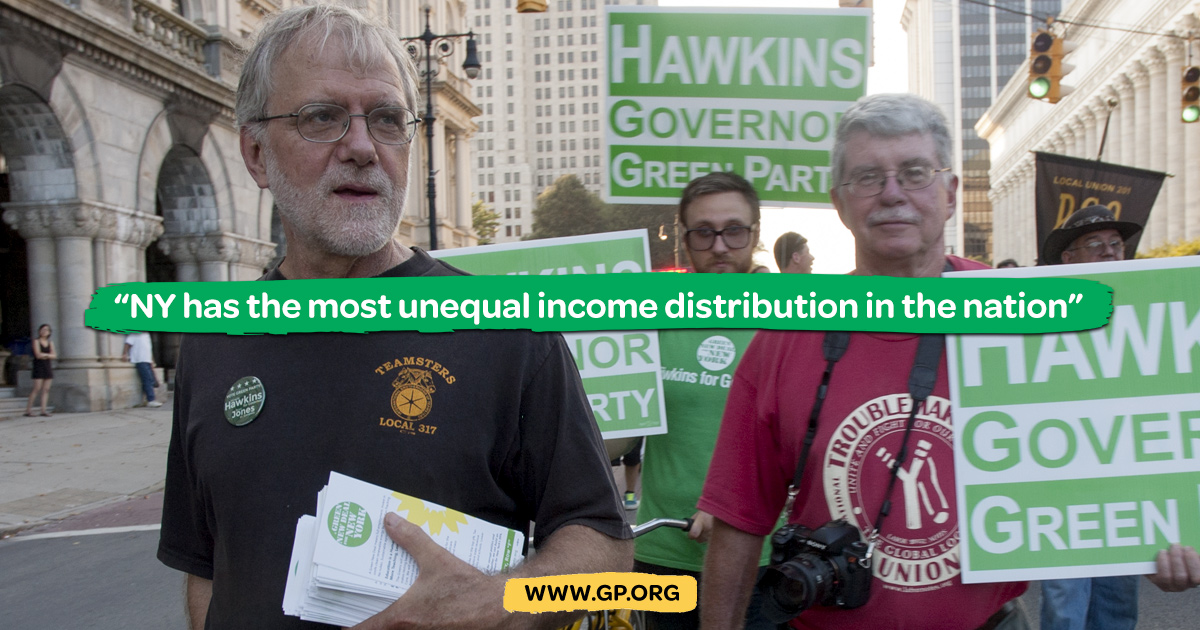 I’m a Teamster who had his pension cut 20% with the approval of the U.S Treasury Department just before I retired. Existing retirees were cut 30%. These cuts were made by a bipartisan act of Congress in 2014 that removed the guarantee in the 1974 Employment Retirement Income Security Act that earned pensions could not be cut. I planned my retirement on that guarantee. The consolation prize for my pension cut is that I can go back to work for up to 1000 hours a year at UPS unloading trucks while still receiving my diminished pension. But I lose my seniority and start over at the state minimum wage of $10.40 an hour.

One big reason I am the Green Party candidate for Governor of New York is because New Yorkers need a raise. I am not the only worker losing ground. Wages are low and stuck in place. Pensions are disappearing. But rent, health care, college, and property taxes keep going up and up. The rich get richer while the rest of struggle to pay our bills and even stay in our homes.

Why hasn’t economic growth delivered the goods to working people over the last 45 years? I believe its stems from two basic sources. One is bipartisan economic policies that have favored the superrich and the giant corporations with tax breaks and regulatory favors at the expense of social programs and consumer, labor, and environmental protections. As the Occupy movement chanted, “Banks got bailed out and we got sold out.”

The other source of labor’s problems is the labor movement itself. We have been weakened over the last 45 years since the 1973-74 recession opened up an onslaught of concessionary demands and union busting by the corporations and their paid-for politicians that continues to this day. Union leaders have tended to rely on cutting defensive political deals with the corporate-sponsored politicians instead of educating and organizing their own rank-and-file members as well as unorganized workers to exercise their own power, from collective bargaining and strikes to solidarity across unions and borders and independent political action.

Unions would have more power by raising their own demands independently instead of devoting so much of limited union funds to support major party politicians who answer to the much larger funds they get from the corporate rich.

We should start by demanding a Green New Deal for New York that secures an Economic Bill of Rights –a living-wage job or income above poverty, a decent home, comprehensive health care, a good education, and a safe and sustainable environment and climate. The centerpiece of thisGreenNew Deal addressesthe mounting climate emergency bybuilding out a 100% clean energy system by 2030, which will create 100,000s of good jobs in manufacturing and construction and cut electric rates in half.

We should demand progressive tax reforms to pay for it. The 31% share of all income going to the 1% comes to $375 billion. If New York increased the taxes on the 1% by 10% through a multi-millionaires tax, retaining instead of rebating the stock transfer tax, and clawing back the Trump corporate tax cut windfall, the superrich would still be securely superrich. But $37.5 billion in additional taxes would enable us to fully fund public schools, tuition-free public college, and currently unfunded state mandates on local governments, enabling us the cut the highest-in-the-nation property taxes outside New York City. We could make the long-neglected and much-needed investments in fixing and expanding our crumbling public infrastructure, from public housing and transit to100% clean energy.

Governor Cuomo claims to have enacted a $15 minimum wage, but it is poverty wage of $10.40 today in most of the state. $15 won’t be reached until the early 2020s, when it will still be a poverty wage. It is time to raise the demand to $20 by the end of 2020 and index it to both productivity and inflation. If the inflation-adjusted minimum wage of 50 years ago in 1968 had kept pace with the 249% increase in productivity, the minimum wage todaywould be $29.43.

An estimated $1 billion in wages is stolen from workers in New York State each year, but they have only recovered about $22 million a year since 2011. We must beef up prosecution of wage theft and pass the SWEAT (Securing Wages Earned Against Theft) Act toenable workers owed wages to file a lien against the assets of their employer.

Prisoners nationwide are on strike this Labor Day nationwide against a slave labor system that forces them to work in New York State prisons for an average 62 cents an hour. New York should extend to workers in prison – and to farmworkers – the labor law protections afforded to other workers, including a day of rest each week, overtime pay, collective bargaining, disability and unemployment insurance, child labor protections, and occupational safety and health standards.

We should demand that Governor Cuomo immediately rescind his Department of Labor’s regulation that permits– in defiance of three state court rulings – employers to work home attendants in 24-hour shifts for 13 hours pay.

I think many union leaders have endorsed Governor Cuomo out of fear. They have not forgotten Cuomo’s attacks on public unions, his threats of massive layoffs, his 3-year wage freeze, his diminished Tier 6 pensions, his anti-union charter schools. But they have calculated that it is better to mollify him in return for small favorsthan incur his wrath again, even though his policies continue to erode the living standards of the working class. The public union leaders would rather rely on the Triborough Amendment’s contract extensions and arbitration than repeal the Taylor Law’s ban on strikes and rely on worker power to win decent contracts.

The Green Party takes another approach. We think working people are the sleeping giant of New York politics – the immense majority. We don’t have to depend on corporate-compromised politicians. We don’t have to bow down to the tiny minority that owns the economy. We can democratize ownership and management of the economy and distribute the profit equitably in proportion to the work we perform instead of to absentee owners.

New York workers need a raise. No one will win that raise for us but us. It is time to organize ourselves to take control our unions and our government from the bottom up.

Howie Hawkins is a retired Teamster in Syracuse and the Green Party candidate for Governor of New York.