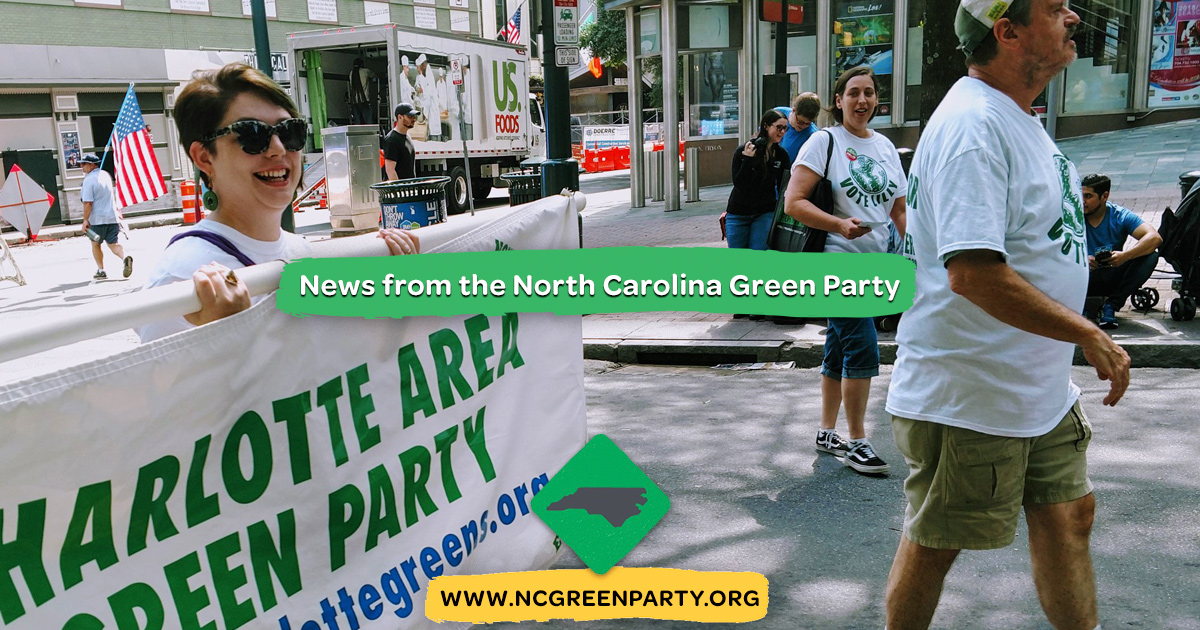 Thanks to all of our Green voters who showed up to vote Green on Super Tuesday, or during early voting! For the first time ever, the North Carolina Green Party (NCGP) held a state-run presidential primary to apportion delegates to the national Green Party's Presidential Nominating Convention, to be held this July in Detroit.

Green Party candidate Howie Hawkins, co-founder of the national Green Party and the first US candidate to run on a Green New Deal in 2010, won with 67% of the vote! Howie is committed to independent working-class politics for a democratic, socialist, and ecological society. North Carolina’s four delegates to the Green Party of the United States (GPUS) convention will be elected at our Spring/Summer Gathering and carry their votes to Detroit on July 11. 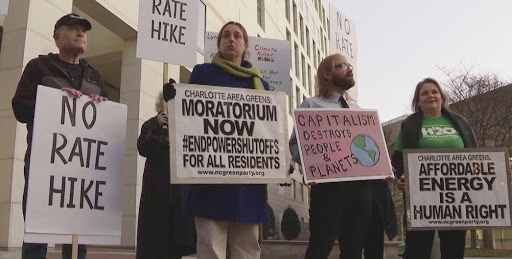 Charlotte Area Greens joined other local activist groups to protest Duke Energy’s proposed 6.7% rate hike hearing held by the NC Utilities Commission January 26 in Charlotte. Over 70 people showed up for the hearing and dozens of protesters gathered outside for a press conference. Charlotte Greens were at the front of the crowd, and the event was covered by major local TV and radio stations.

Duke Energy is proposing to raise its rates to force its captive ratepayers to cover the cost of state-mandated cleanup of coal ash contamination from Duke's dirty energy plants. The NCGP is calling for an end to Duke’s monopoly power—make them clean up their mess, and bring our energy grid under public control.

In light of the need to limit personal contact to avoid the spread of COVID-19, the NCGP Coordinating Committee has decided to move our Spring/Summer Gathering to an online venue via video-conferencing.

The NCGP will be releasing a statement about the impact of the virus on North Carolina, and what the pandemic has revealed about public health response under intensely neoliberal capitalism, with continued privatization of the healthcare system, the concomitant underfunding of public resources, and the lack of hospital beds. One obvious problem is that a universal healthcare system would have removed the need to find funding for the millions of uninsured and underinsured citizens that will come into contact with the virus. The Hawkins campaign has developed a vision for a universal healthcare plan that is worth your attention: Medicare for All as a Community-Controlled National Health Service.

Planning has just begun for our statewide Spring/Summer Gathering, which will be scheduled for sometime in May or June. As noted above, due to the need to limit personal contact to avoid the spread of the COVID-19 virus, the NCGP Coordinating Committee voted to move the venue to an online format. This will be an important meeting, and all members are encouraged to attend. We will be electing delegates to the Green Party's Presidential Nominating Convention, among other business—details will be forthcoming at least three weeks in advance of the gathering.

The GPUS Presidential Nominating Convention is scheduled to be held at Wayne State University in Detroit, Michigan, July 9–12. However, this venue may be changed to an online format depending on the development of the COVID-19 crisis.  Registration is now open. National meetings are a great place to find out more about what other state parties are doing, attend workshops, and meet face-to-face with Greens you may have only met online. Minority scholarships and some travel funding may be available.

The Green Party refuses all corporate contributions, so dues-paying members play a vital role ensuring NCGP's state and local organizations have the resources needed to build an independent party for people and planet free from the influence of the 1 percent.

Who can become a member of the North Carolina Green Party? North Carolina residents who are registered to vote as "Green" are eligible to become members of the NCGP after they have affirmed Green Party principles (see our 10 Key Values and platform), set their own dues rate using a budget-friendly sliding scale, and initiated payment of those dues. You choose your own dues level on the honor system, based on what you can pay. Note: Residents who are ineligible to vote due to state disenfranchisement (including but not limited to reasons such as age, criminal record, or noncitizen/undocumented status) may also become members. Email the NCGP secretary at [email protected] if you feel you are ineligible to vote due to state disenfranchisement. All NCGP members, with the exception of noncitizens, shall pay modest annual dues.

Find out more at our Membership Page.

Find Us on Social Media

Join our statewide and regional NCGP Facebook groups to connect with Greens: