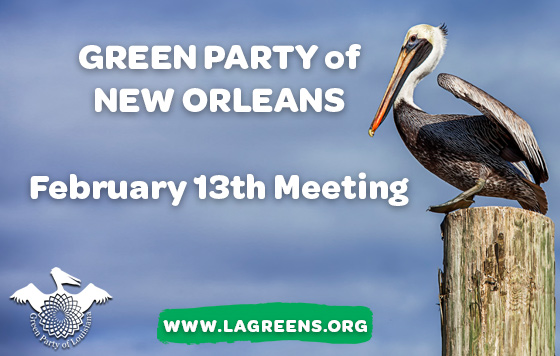 However, it's my opinion that we can't afford such luxuries. The current widespread unrest and unprecedented levels of civic involvement surely represent an opportunity, and our challenge is to make the most of it, for the common good.

To that end, we've gotta get organized. Grassroots organizing ain't always glamorous, but it needs to be done, and that is the work before us.

Our next meeting is Monday, 13 February 2017, from 6-7:30 PM, at the Mid-City branch of the library — details on our web calendar. Hope to see you there. If you have an action item to propose for the agenda, send it along or bring it to the meeting.

Bart Everson on behalf of
Green Party of New Orleans