No War in Ukraine! 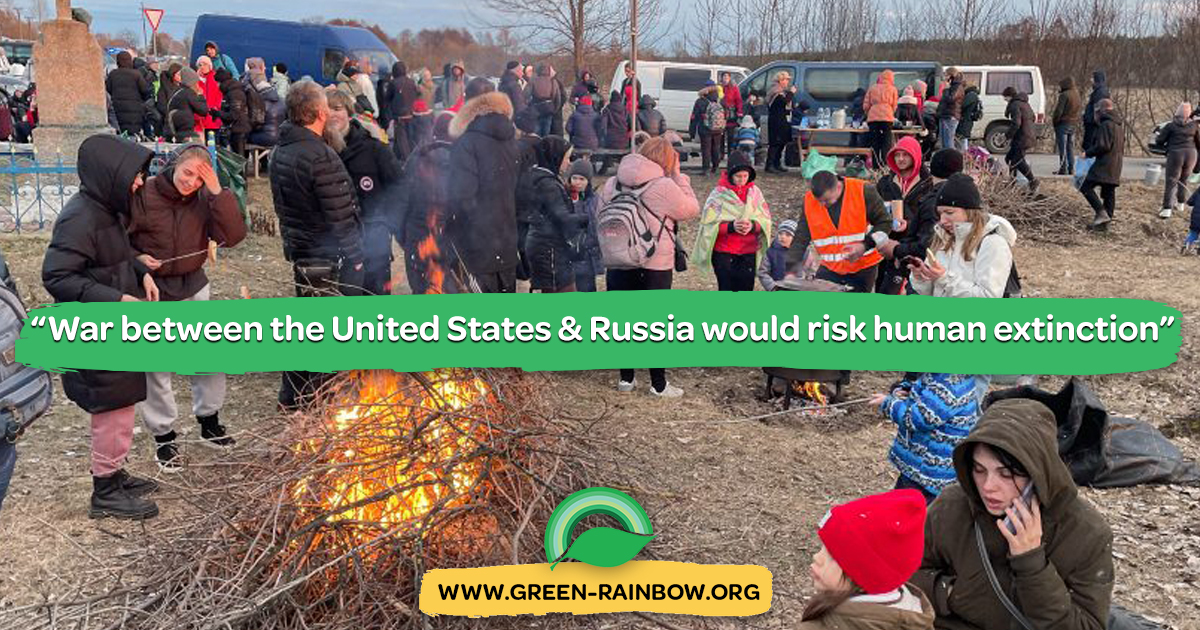 "War between the United States and Russia would risk human extinction. Both have policies to use nuclear weapons and could resort to them in the fog of war. Nuclear war would cause ecosystem collapse and humanity to starve. What exactly are we risking this for?" Dr. Jill Stein

This is the closest we have come to "nuclear confrontation" since the 1962 Cuban missile crisis. We have become desensitized to the term "nuclear confrontation" as if it is an argument between friends. In reality, it is a euphemism for potential nuclear annihilation, the end of life as we know it. It is time to get serious as the world around us becomes more dangerous, as two nuclear powers–the US and allies face off against Russia. On March 6 let us Greens stand up, stand out, speak up and speak out for PEACE. Let the world know that Greens are committed to peace and the economic and political policies that promote it. Take action on the 6th and join with the world community demanding "NO War Over Ukraine."

As a political party committed to non-violence, The Green Rainbow Party has a responsibility to address both overt events of violence as well as the contributory process which precedes the act itself. Just as peace is not merely the absence of war, violence is not merely the act of war. Sanctions, threats, covert regime change efforts, propaganda, refusal to consider the security needs of others, are all contrary to non-violence and detrimental to human advancement. We oppose all such acts of violence.

For those of us who desire peace, non-violence is one of our 10 Key Values. We must become more vocal and more active to drive home our demand that the US foreign policy establishment and its perpetual war mentality are not acceptable and by no means represent the interests and needs of the American people.

There are no good guys in this crisis. Putin was wrong to invade. The US foreign policy establishment has been consistently wrong for decades egging Russia on while at the same time invading, overthrowing, sanctioning, threatening, droning, and cajoling throughout the world to maintain a fictional hegemonic attitude of "our way or the highway."

Over many decades, millions have died and 10’s of millions have had their lives totally ruined as the result of US hegemonic dreams. The world is in turmoil. The fact is that the US and NATO allies have been an ongoing catalyst.

But first things first. The opposing factions in Ukraine must jointly agree to a ceasefire and withdrawal of foreign forces and armaments from Ukraine. Ukrainian neutrality must be accepted by all parties. International mediation must be implemented to establish a mutually agreeable solution that guarantees the security and well-being of all.

Biden continues authorizing untold millions in arms for Ukraine, further injecting Washington into this war. The German government has approved arms for Ukraine for the first time. In 2008 NATO announced its intention to include Ukraine in NATO, followed by the US-supported coup in 2014. Additionally, US/NATO refused to negotiate the security interests of all stakeholders, including Russia.

US credibility is near zero. The most recent news is that Zelensky and Putin are negotiating a time and place for peace talks. It is now time for us to speak out and bring the message of non-violence into the mainstream of American policy. The GRP is the only party within the American political system that unabashedly stands for non-violence while defending the peoples’ democracy and addressing their true needs. It is the only party committed to values that will secure the continuation of the human species.

On March 6 an International Day of Protest against this war is being organized. We will keep our readership notified via "News Alerts'' of actions being planned throughout Massachusetts. Stay tuned for "PEACE."

Photograph by Kostyantyn Chernichkin:
Ukrainians fleeing the war to Poland warm near the fire as they stat in line to border checkpoint Rava Ruska, Ukraine on Feb. 26, 2022.