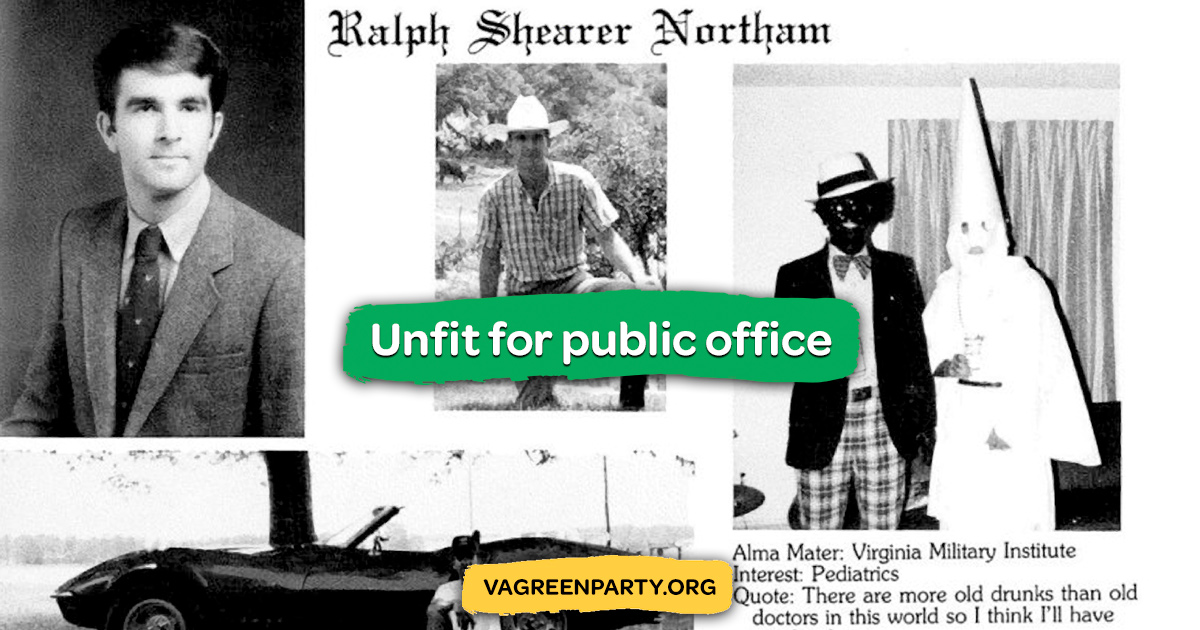 Racist Actions in Past and Present Make Him Unfit to Govern

On Friday, February 1, the Green Party of Virginia became aware of a photograph from Virginia Governor Ralph Northam's 1984 yearbook from the Eastern Virginia Medical School (EVMS). The photo showed one person dressed in the robes of the Klu Klux Klan and a second dressed in blackface. In a press conference that evening, the governor acknowledged he was one of the people in the photo and apologized.

Calls mounted for his resignation from across the political spectrum, even as he backtracked his initial admission of guilt. He admitted in a second press conference that he had worn blackface, but on a different occassion, and nearly moon walked across the stage. Yet, he has adamantly refused to resign.

His refusal to resign, when everyone demands that he do so, is indicative of his character. Clearly, Governor Northam does not believe his actions merit any consequences whatsoever. It remains to be seen whether the General Assembly will make good on their demands by finding a way to remove him from office.

However, calls for his resignation suffer from myopia. While Northam's actions in the past are no doubt racist, his actions today, particularly regarding the Atlantic Coast Pipeline (ACP), show that he is still an actively racist person. As the Hampton Roads Green Party put it, "Racially unjust actions by Northam and his Administration are in evidence today in Union Hill, Buckingham County where a fracked gas Compressor Station is being perpetrated on an historic freed slave community." This compressor station is not wanted in this community and its effects will be damaging to the local residents. In a summary prepared for the Sierra Club, Dr. Curtis Nordgaard described a number of health risks associated with compressor stations, including increased levels of carcinogens, asthma, severe headaches, irritated throats, and more. The compressor station is designed to move liquid natural gas (LNG) through the proposed Atlantic Coast Pipeline. The effects of the burning of LNG will also have a racist impact as they will disproportionately damage the health and well-being of people of color around the globe through climate change.

Governor Northam has not been merely complicit, but an active participant in this environmental racism. He has removed Rebecca Rubin and Samuel Bleicher of the Air Pollution Control Board (APCB) who might have voted against the permit for the compressor station, and Roberta Kellam of the Water Control Board (WCB) who decried the pipeline projects. He, with the support of the General Assembly, reappointed David Paylor to lead the Department of Environmental Quality, despite Paylor's support for both the ACP and the Mountain Valley Pipeline (MVP). He has ignored statements by his own Advisory Council for Environmental Justice (ACEJ) that explicitly recommended, "that the Governor direct DEQ to suspend the permitting decision for the air permit for the Buckingham compressor station pending further review of the station's impacts on the heath and the lives of those living in close proximity."

Meanwhile, the voices of those most directly affected by Northam's environmental racism, the residents of Union Hill, have been ignored by the Republican Party and a large portion of the Democratic Party. In a statement, Union Hill residents denounced Northam's environmental racism, saying, "For us who live or work in Union Hill, Buckingham, Virginia, the revelations that Gov. Ralph Northam engaged in racist behavior in medical school over thirty years ago are less troubling than his most recent actions, inactions, and silence about environmental racism related to the massive fracked gas compressor station to be built in Union Hill." In an interview with The Daily Progress, Union Hill resident Ruby Laury stated, "'I immediately thought of the actions that the governor took in November when he suddenly dismissed those two board members.'"

Poor People's Campaign co-chair, Reverand Doctor William Barber made a similar point on Twitter in regards to reactions to the photo, "If we don't learn how to deal with & name policy racism we are going to keep getting caught in knee jerk cultural acts & name calling, which does not probe or expose the depth of racism in our public policy today." If Northam's use of blackface is sufficient to make him unfit for the office of Governor, then surely his environmental racism makes him even more unfit.