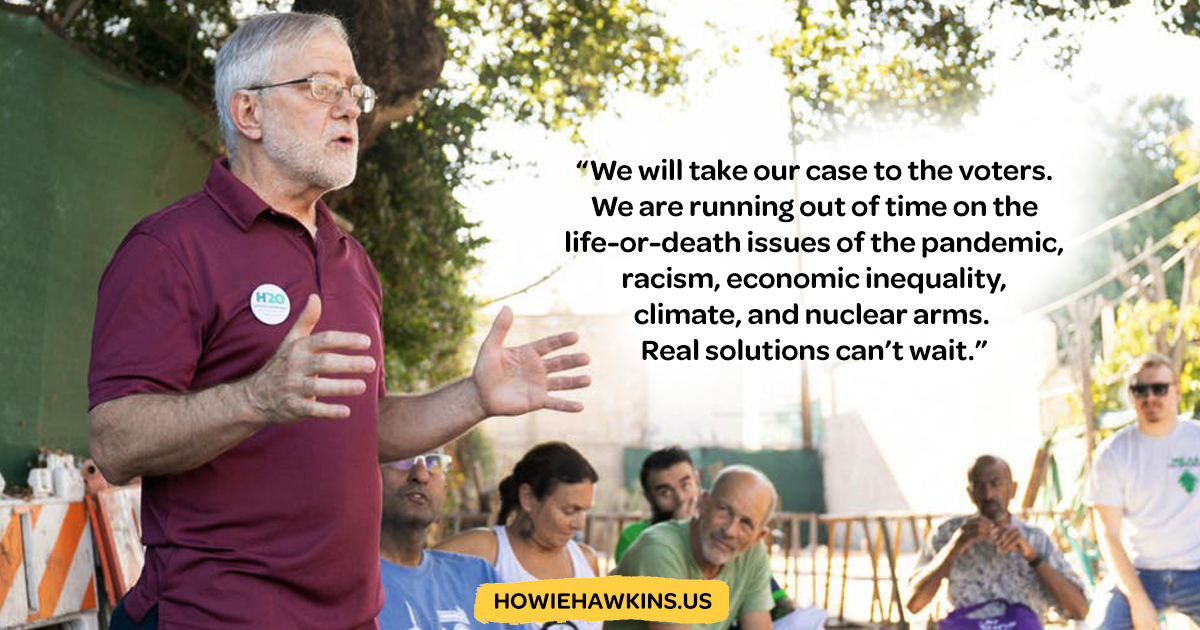 Howie Hawkins, presumptive nominee of the Green Party and pick of the Socialist Party USA, says we need a third option for President. And writing in The Independent, he makes the case that he’s the man for the job.

It’s a message that some Democrats have been quick to dismiss albeit with notes of caution.

Jeff Weaver, longtime advisor to Bernie Sanders, likened the Greens to “a political mirage” but told Politico that third parties can matter at the margins in critical states.

Mr Hawkins, 67, a longtime grassroots organiser, has run for office two dozen times. He was the Green Party’s candidate for New York governor in 2010 and 2014, where he received 5 per cent of the vote, one of the highest for an independent progressive party candidate in the state’s history.

His campaign aims to pull together disillusioned liberals, the Bernie Sanders “refugees”, he says, and beyond.

“Our main target is the 100 million voters who sat out the 2016 election. They are disproportionately working class, people of color, and young. They are the future of independent left politics in the US,” Mr Hawkins writes.

He gives short shrift to both the main parties’ nominees. President Trump is a “loser”, and a “modern Typhoid Mary” who is willing to risk infecting his own supporters at his “super-spreader rallies”.

Joe Biden’s “conservative policies … would fit comfortably into the centre-right parties of Europe”.

Neither candidate is doing enough to combat the coronavirus crisis or support the calls of black Americans who are leading nationwide protests to demand racial justice and police reform, Mr Hawkins states.

He advocates for a federal testing program on Covid-19 and “community control of the police, ending the war on drugs and reparations for African-Americans”.

The climate crisis, as you would expect, is front and centre. Mr Hawkins’ plan is for an “ecosocialist Green New Deal”, using government resources as the base for an emergency program to rebuild the US economy, achieving zero-to-negative carbon emissions and 100% clean energy by 2030.

(Mr Trump is a cheerleader for the fossil-fuel industry and Mr Biden’s plan is to ensure the US achieves a 100% clean energy economy and net-zero emissions no later than 2050).

According to the RealClearPolitics national polling average, Mr Biden currently leads Mr Trump by around 9 percentage points and supporters are cautiously optimistic, particularly in light of Mr Trump’s flailing leadership and Twitter meltdowns. But the lessons of 2016 still burn bright.

“Biden is not over 50% in the battleground states and often his lead is in the margin of error. Anything could happen in the next five months,” Hillary Clinton’s 2016 campaign manager, Robby Mook, told Politico.

“What matters most is reminding people that Trump could win.”

Dr Larry J Sabato, director of the Center for Politics at University of Virginia and namesake of pundit site Sabato’s Crystal Ball, told The Independent: “Howie Hawkins has low name identification, except maybe in parts of New York State. His real problem, though, is that Democrats and independent liberals are less likely to stray this November because the focus of this election is Donald Trump.

“Lots of Democrats blame Jill Stein for Trump’s victory. It’s likely Stein cost Clinton Michigan, and you can argue about several other states too. If you mention the Green Party on Twitter, you get an instant argument from Democrats. Hillary Clinton wishes she had some of this intensity working for her back in 2016.

“Winning is not even vaguely in the picture for the Greens; not a single state will vote for the Greens. And I doubt Hawkins and other third-party candidates are going to do as well this time around. 6% voted for candidates other than Trump and Clinton in 2016. It’ll be lower this year.”

In the post-mortem that followed Clinton’s failed presidential bid, some reporting pointed to votes for third party candidates – the Libertarian Party’s Gary Johnson, Green Party’s Jill Stein, and independent conservative Evan McMullin - as to why Clinton had lost. (But as Nate Silver’s 538 podcast episode points out, the reality is likely a lot more complicated).

Mr Hawkins is also undeterred by Democrats who would call the Green Party “spoilers”.

“They refuse to embrace the solution to the spoiler problem we have advanced since the Ralph Nader’s Green Party campaign in 2000: replace the Electoral College with a ranked-choice national popular vote for president,” he writes.

Despite a mountainous climb ahead, Mr Hawkins is bullish.

“We will take our case to the voters. We are running out of time on the life-or-death issues of the pandemic, racism, economic inequality, climate, and nuclear arms. Real solutions can’t wait.”