It’s not too late to make a difference 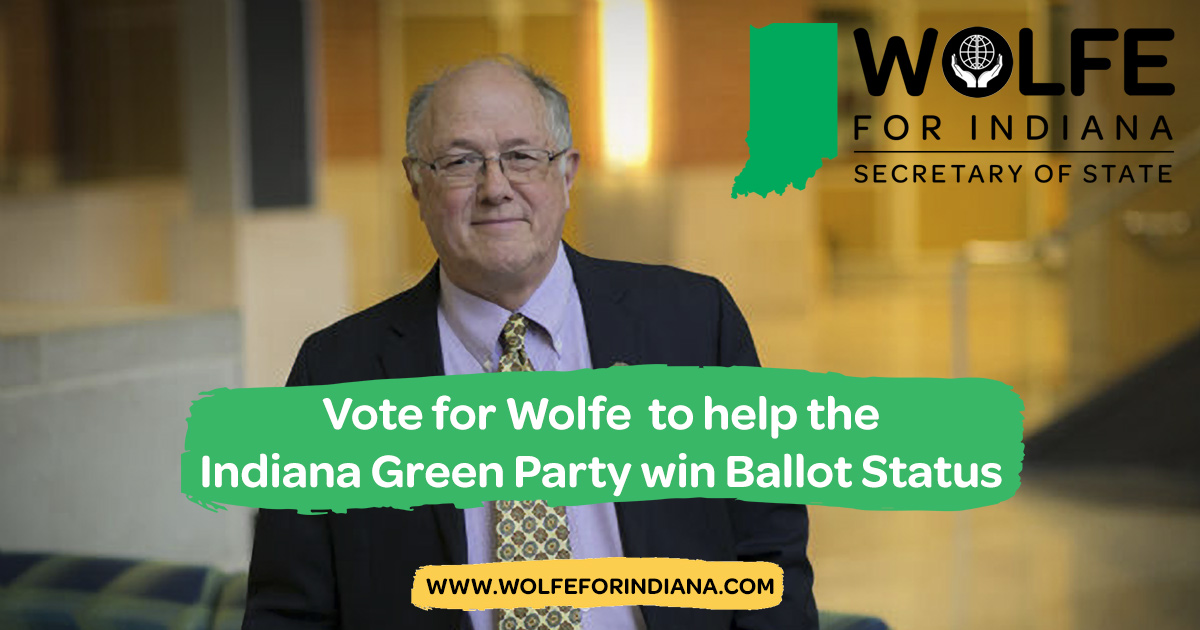 With just 21 days before midterm elections, time is running out on our best opportunity to get the Indiana Green Party on the ballot. Please consider donating to our candidate for Secretary of State, Dr. George Wolfe. He is the Green Party’s write-in candidate who has been endorsed by 92 Counties Strategy.

We have three weeks left to inform as many Hoosiers as possible about George Wolfe and how to write-in George Wolfe’s name on the ballot. We need your help!

We’re paying for yard signs, travel expenses for George Wolfe and his campaign staff, boosting social media posts, and researching other outreach strategies such as text messaging. But there’s one problem: we’re short of funds.

Will you make an emergency donation to fund our efforts to get the word out about George Wolfe through Election Day?

If George Wolfe gets at least 2% of the overall vote for Indiana Secretary of State, the Indiana Green Party will automatically achieve ballot access for upcoming elections.

It is past time for Hoosier voters to have an authentic choice—candidates that are not beholden to corporate interest! Green Party candidates do not accept money from corporations. We believe in democracy — one person, one vote; not one dollar, one vote.

If you can’t help financially — we understand. There are so many ways to support, so please help out by telling your family and friends as well as sharing George Wolfe’s social media posts.

"I believe the Secretary of State should be an advocate for the voters, a leader who exposes injustice so as to bring an end to gerrymandering, unfair ballot access laws, voter suppression and other forms of party-based political corruption. Both Republicans and Democrats have been guilty of gerrymandering. Only a Secretary of State from outside the two major parties can succeed in ending this illegal practice." - Dr. George Wolfe

Above all, please remember to vote on or before November 6th!