Green Party: Saudi Arabia deserves U.S. sanctions over war on Yemen, not a warm welcome for the Saudi crown prince 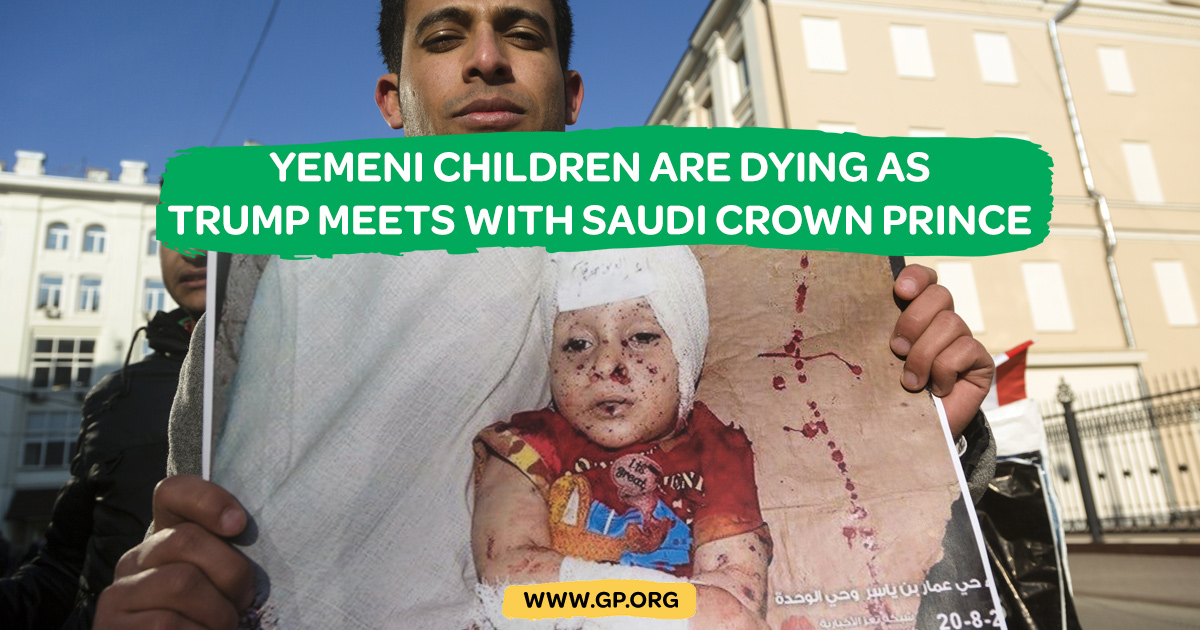 WASHINGTON, D.C. -- Green Party leaders said that Saudi Crown Prince Mohammad bin Salman deserves protest and the threat of sanctions over his country's mass murder of Yemeni civilians instead of a friendly welcome to the U.S.

The Saudi Arabian leader visited President Trump on Tuesday for friendly talks about military assistance, purchases of U.S. weapons, and sharing of wealth.

"Saudi Arabia's military intervention, including bombing raids, in Yemen has resulted in thousands of civilian deaths and famine. The only humane response is swift and severe sanctions against Saudi Arabia," said Deanna Dee Taylor, co-chair of the Green Party's Peace Action Committee (GPAX).

"For decades, we've watched Republican and Democratic U.S. presidents lavish friendship, military support, deals with Aramco [the state-owned oil company], and generous taxpayer-funded subsidies on Saudi Arabia's brutally repressive monarchy. Negotiations with the Saudi crown prince should begin with a sharp condemnation of his government's atrocities in Yemen, domestic suppression of the rights of women, persecution of LGBT people, and execution of journalists and political opponents -- and with pressure to reverse all these policies," said Ms. Taylor.

Green Party leaders said that the U.S.-Saudi coalition has been motivated by U.S. desire for regional dominance and control over the Arabian peninsula's oil resources, as well as hostility towards Iran, Saudi Arabia's rival in the Middle East and western Asia.

"The U.S. alliance with Saudi Arabia persists because the U.S., whether Democrats or Republicans control the White House and Congress, refuses to recognize the climate emergency. The climate crisis can't be separated from ongoing human rights crises and belligerence in the Middle East. U.S. foreign policies that support Saudi Arabia's rain of death and mayhem on Yemen are also prolonging the release of greenhouse gases into the atmosphere," said Bahram Zandi, co-chair of the Green Party's International Committee.

If you were prepared to protest against Donald Trump, why aren't you protesting against Mohammed bin Salman?
By Caroline Lucas, co-leader of the UK Green Party and Member of Parliament for Brighton Pavilion since 2010
The Independent (UK), March 6, 2018

Pentagon to Congress: You Can't Stop Us from Fueling Saudi Arabia's War in Yemen
By Katherine Hawkins, Project on Government Oversight, March 9, 2018