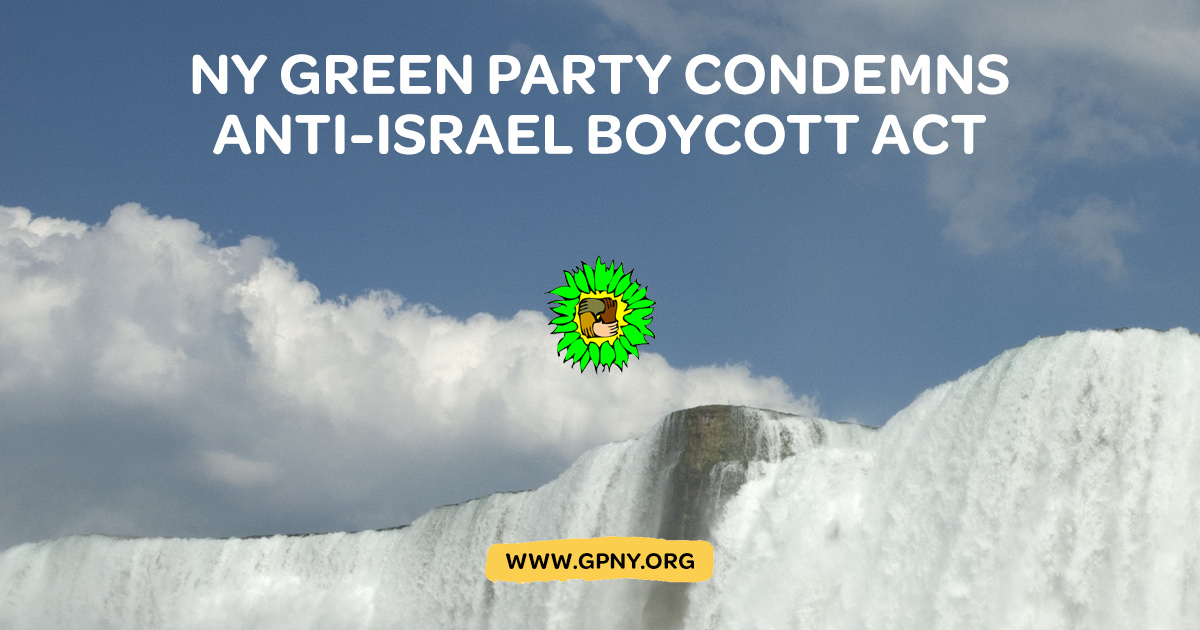 The below letter can be viewed online and shared via Scribd from:
http://www.gpny.org/open_letter_to_schumer_and_gillibrand_opposing_israel_anti-boycott_act_-_s_720

As co-chairs of the Green Party of New York, we write today in opposition to S.720, the Anti-Israel Boycott Act. The Green Party is committed to defending the civil right of freedom of speech, including the right to protest. We are also advocates of a foreign policy based on self-determination and human rights for all oppressed peoples. As such, S.720 deliberately assaults the former, and is diametrically opposed to the latter. Thus, we urge you to withdraw your co-sponsorship of S.720 and to oppose the bill in committee and on the floor.

By seeking to expand the Export Administration Act of 1979 and the Export-Import Bank Act of 1945, this bill would amend said acts to prohibit U.S. persons from supporting boycotts conducted by international organizations against Israel and its settlements in the Palestinian Occupied Territories. The bill would also extend penalties for simply requesting information about said boycotts. Amazingly, violators would be subject to a minimum civil penalty of $250,000 and a maximum criminal penalty of $1 million and 20 years in prison. This is a wholesale criminalization of political speech and an attempt to remove First Amendment protections from a type of speech that is explicitly protected, due to its controversial nature, by the Bill of Rights. It also attempts to restrict the use of a political tactic with a long, successful history in the United States, and one which has been used by marginalized and oppressed groups to pressure those with power. Boycotts organized during the Civil Rights Struggles of the 1960s and the anti-apartheid movement of the 1970s and 1980s had a positive effect in hastening the end of cruel and oppressive political orders.

This bill targets individuals and groups, including the Green Party of New York, that support the call by Palestinians for boycotts, divestments, and sanctions in order to pressure the Israeli government to grant Palestinians fundamental human rights, and to end the illegal Israeli occupation of the Palestinian Territories. It is important to note that boycotts are peaceful political acts and not armed violence against a state or people, and are invoked when political or business leaders refuse to address persistent injustice. As a United States Senator you should recall that one of the most famous events in the birth of our nation, the Boston Tea Party, was the culmination of a boycott of British taxation. Surely you know of the Montgomery Bus Boycott, a seminal event in 20th century American history and part of a civil rights struggle in which current members of Congress such as John L. Lewis participated? Perhaps you have heard of Cesar Chavez and the boycotts he organized in order to help build the United Farm Workers union? S.720 attempts to abrogate the rights of U.S. persons to engage in a Constitutionally-protected, time-honored tradition of protest. If these rights can be curtailed, what further chilling of free speech and political rights will we see?

Finally, S.720 is clearly aimed at worsening the condition of the Palestinian people by criminalizing political protest on this specific issue in the United States. Human Rights Watch reports that over the last two years Israeli security forces killed at least 214 Palestinians and injured 15,156. Israel, along with Egypt, maintains a blockade on the Gaza Strip, severely limiting life-saving medicines and goods from entering the territory and engaging in an illegal form of collective punishment. Israel has increased its unlawful settlement activity in the West Bank, constructing a further 1,000 housing units to add to 560,000 settlers already illegally occupying territory. We choose to support boycotts of Israel to bring an end to the long-term oppression of the Palestinian people and to demand they be granted basic human rights.

Therefore, we strongly urge you to remove your co-sponsorship from S.720, and to oppose it in committee and on the floor. Please contact us if you have further questions or comments on the Green Party of New York’s opposition to this legislation.