The DC Statehood Green Party in conjunction with the National Green Party of the United States invite fellow Statehood Greens, Greens, and our political and community allies to join us as we demonstrate our solidarity and our resolve to resist hatred, corporate plundering of our communities, and tyranny characterized by the incoming administration. Bring your songs, puppets, banners, shirts, hats, buttons and other items to show your solidarity!!!!

We will post information on the Logistics page as we have it — please come back frequently for updates.

The demonstration will begin at 7:00 a.m. and continue until after Trump passes at the conclusion of the parade, which will be sometime in the afternoon. Throughout that time, there will be speakers, music, chanting, etc., and then we will be right there when Trump goes by.

When to arrive: To access the demonstration on the Inaugural Parade Route, people will have to pass through checkpoints operated by the Secret Service. The checkpoints will open sometime between 6:00 a.m. and 7:00 a.m., so that's when people can enter the parade route and come to the demonstration. It is recommended to arrive first thing in the morning because the checkpoints may close at some point based on crowd size, and it is crucial that demonstrators get into the parade route and fill up the space along it.

Where to enter: The Secret Service says the location of the checkpoints are still subject to change, but as of now the closest listed checkpoint to the Navy Memorial, the main protest stage, is on 7th St. and D St. NW. The closest checkpoint to Freedom Plaza, the secondary stage, is at 14th St. and E St. NW. Both checkpoints are about a block from the rally sites. There may or may not be the ability to walk east and west on Pennsylvania Ave., so it is recommended to use the checkpoint closest to the rally site in case it becomes too congested; definitely enter on the north side of the parade route, as that is where the demonstration will be. Do not enter the parade route from the south side as there will be limited ability to cross Pennsylvania Ave.

How to get there: Metro will open at 4:00 a.m. and be running extra trains, so getting downtown by that time will be possible. The Archives Metro Station will be closed because it is within the secure zone, but the other stations in that area will be open and running extra service.

Pedestrian and vehicular maps released by the Secret Service of street closures on Jan. 20 Inauguration Day

Inaugural events attendees are encouraged to use public transportation, as many streets in and around the Capitol Grounds and the National Mall area will be closed to private automobiles for much of the day. Metro plans to run special rail service on Inauguration Day to support large crowds traveling to and from the National Mall and other events in the region.

For 17 consecutive hours -- from opening until 9 p.m. -- trains will run frequently on all lines, including "Rush Plus" service on the Yellow Line between Franconia-Springfield and Greenbelt.

Routes that normally cross the National Mall will turn around at special locations outside the secure area; use Metrorail instead. Visit wmata.com/inauguration for information.

Temporary bus stops will be marked around the security perimeter of the event where bus routes will end.

MetroAccess paratransit service for customers with disabilities will operate identical hours to rail and bus schedules.
MetroAccess customers are encouraged to plan extra time to travel due to increased traffic throughout the service area. Due to road closures, MetroAccess vehicles will only be able to drop off customers several blocks from the National Mall and parade route.

MetroAccess vehicles will not be permitted access to streets that are closed. All MetroAccess users should be prepared for detours and extended travel times.

Metro has approximately 60,000 parking spaces in 29 lots and 22 garages throughout the Washington region for private motorists to park on Inauguration Day. Many of these facilities are located near major highways, such as I-95/I-495 (Capital Beltway).
Tour buses are not permitted to park at Metro stations or use Metro bus facilities or roadways. Follow tour bus instructions on dc.gov.

Regular weekday parking rates will be charged as you exit the garage and may be paid by credit card.
Parking facilities at Metro stations may reach capacity early on Inauguration Day. Have a backup plan in the event that your selected parking facility is full.

Metro's website is wmata.com. For important real-time updates regarding Metro service and parking availability, follow @wmata, @metrorailinfo and @metrobusinfo, and sign up for Metro Inauguration Alerts by texting POTUS to 90360. For Metro travel information by phone, call (202) 637-7000 [TTY 202- 962-2033]. 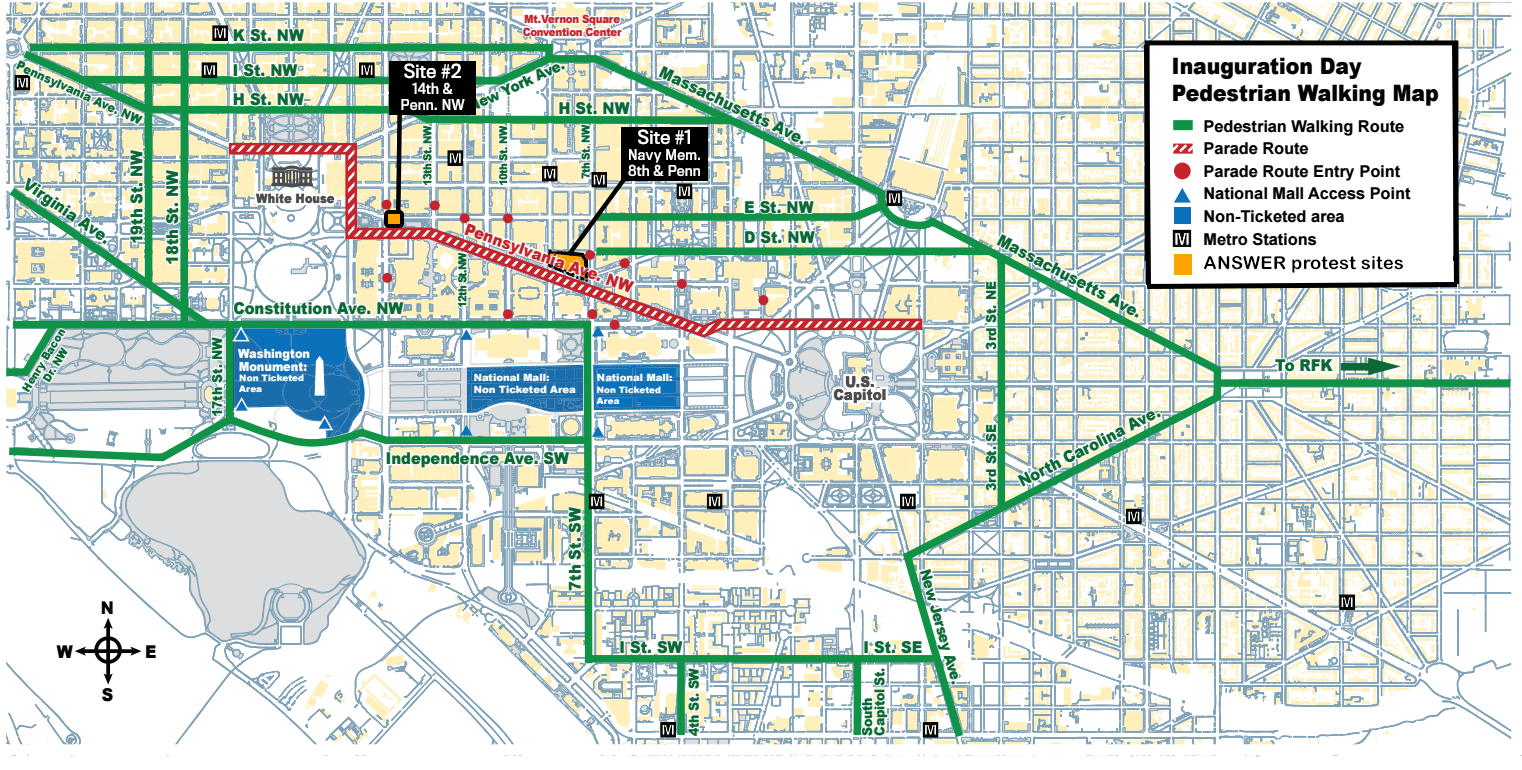