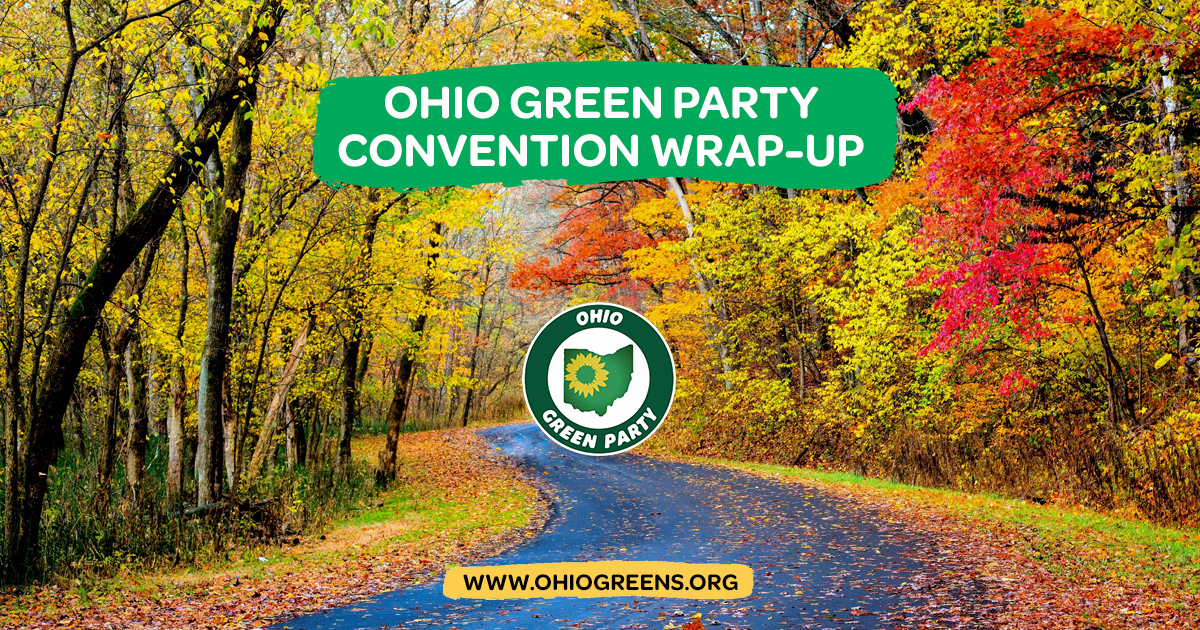 Columbus, Ohio – The Ohio Green Party held its' biennial convention this past Saturday in Columbus. The convention elected delegates to the Annual National Meeting this July in Salt Lake City, Utah.

The Green Party re-elected Philena Farley of Columbus and Logan Martinez of Miami and welcomed newcomer Kevin Fay of Akron to the National Committee of the Green Party US.

The convention also re-elected all three of its returning alternate delegates, Anita Rios of Toledo, Nathan Lane of Cincinnati, & Jake Ellis of Lorain.

Candidates from across the state were gathered, as the Green Party fields a record number of candidates this year.

The featured speakers of the convention were the Green Party's candidate for Governor, Constance Gadell-Newton, and her running mate for Lieutenant Governor, Brett Joseph.

Currently, the Green Party is the only recognized minor party in Ohio. In each of Ohio's eighty-eight counties, voters will be able to request a Green Party ballot and cast votes for Green Party candidates.

The Green Party endorsed Philena Farley in her write-in bid for the US Senate. She is an IT professional based in Columbus who is focused on privacy issues.

Joe Manchik is on the ballot as a Green in the 12th Congressional District, which includes all of Delaware, Licking, and Morrow Counties, as well portions of Franklin, Marion, Muskingum, and Richland Counties. A retired IT professional, he wants to take on the Military/ Industrial Complex.

"I want to sponsor legislation that will require the Pentagon to be thoroughly audited," said Manchik.

Anthony Seta is an endorsed write-in candidate for the 1st Congressional District, which includes Warren and Hamilton Counties. He is an animal rights activist and works on social justice issues.

The Ohio Green Party opposes the candidacy of Mr. Condit in the 2nd Congressional District. He is a Republican and a Trump supporter. He is attempting to steal the Green Party's line as a write-in to advance an agenda in opposition to Green Party key values, such as Peace, Social Justice, Grassroots Democracy, and Ecological Wisdom.