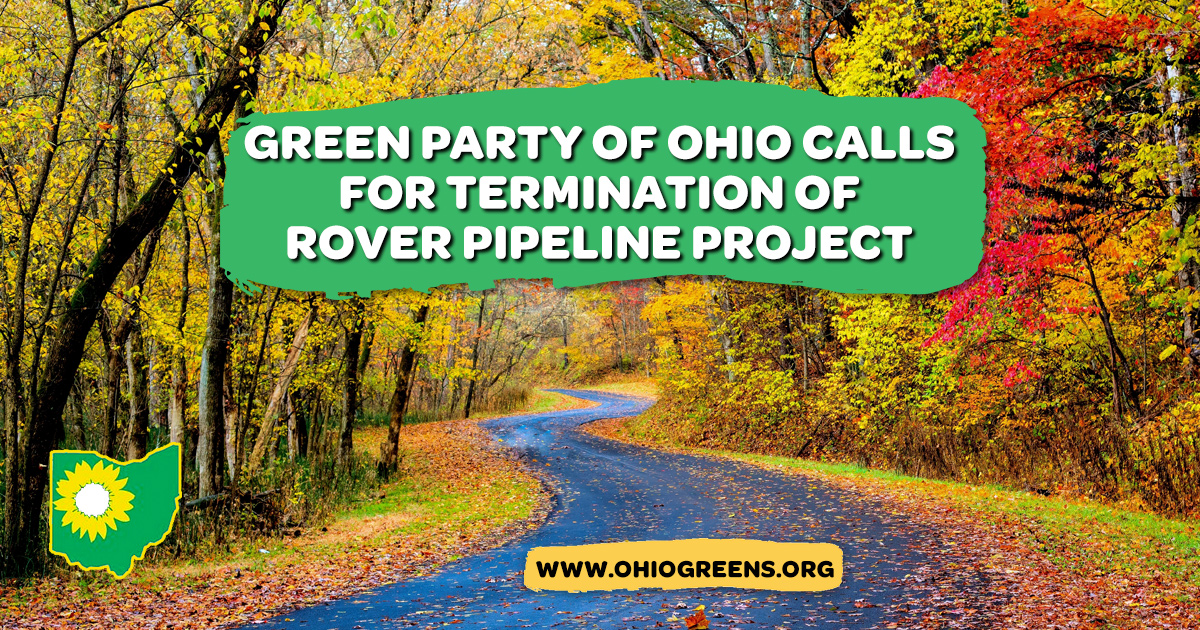 CLEVELAND OH – The Green Party of Ohio has issued a call for the immediate termination of the Rover Pipeline project. This project is being constructed by a subsidiary of Energy Transfer Partners, the same company that is involved in the infamous Dakota Access Pipeline that dominated news coverage over the past year.

The Rover Pipeline, which would cross several Ohio counties from the SE to NW parts of our state, has already received violation notices from the Ohio EPA regarding the leaking of drilling fluids into sensitive wetland areas in Richland and Stark counties.

The drilling fluid involved, composed mostly of bentonite clay, can smother aquatic life in areas where releases have occurred. The larger of the two spills covered an area approximately the size of 8 football fields. According to the company itself, the spills contained as much as 250,000 gallons of fluid.

In addition to the drilling fluid spills, the company was referred to the enforcement division of the Federal Energy Regulatory Commission for the purchase and subsequent demolition of a circa 1843 house that was under consideration for inclusion in the National Register of Historic Places.

Due to the blatant disregard that Rover Pipeline, LLC has shown for the environmental health and cultural significance of areas it is operating in, we are asking for an immediate cessation of construction regarding this project. We ask that Ohio Governor John Kasich intervene and use his administrative powers to force a halt to this destructive and dangerous project.

The Ohio EPA has strayed far from the "environmental protection" that is a part of its name. The fines that will be levied are small change compared to the total cost of the project. Ohio citizens would be better served by an agency that actually took its mandate seriously and did more than issue feeble fines and protestations.

Green Party of Ohio Political Director Joseph DeMare had this to say: "In the end, money is imaginary but the damage done to our wetlands is real, and the Ohio EPA Director's phony outrage does nothing to actually protect the environment."

This project is of dubious value to the citizens of Ohio and the potential for more damage and accidents is too great to ignore.