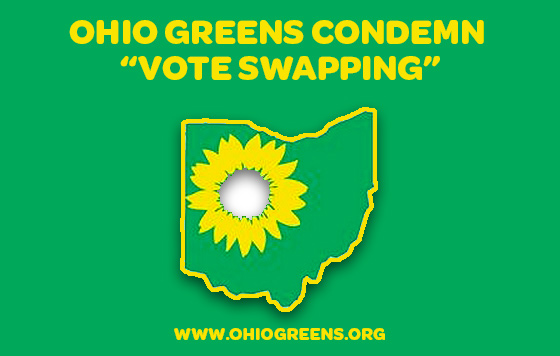 Cleveland, OH: The Green Party of Ohio is urging our supporters to reject outright the concept of "vote-swapping", where a Green Party voter would agree to cast their ballot for another party on the dubious promise that an unknown person in another state would then agree to cast a vote for the Green Party.

This idea is being floated by the Democratic Party and the Hillary Clinton campaign as a way to shore up her falling poll numbers in swing states such as Ohio.

The Green Party of Ohio will need to break 3% of the total votes cast in the state for President to maintain our hard-won ballot status. That status has enabled us to run campaigns for the US Senate, the US House, the Ohio House and Franklin County Prosecutor this year.

If we lose our current status we will be forced to gather signatures to regain it for future elections due to the anti-democratic restrictions placed upon us by the Ohio Legislature. We are currently the only political option in Ohio, outside of corporate parties. It is vital that maintain that status so we can continue to offer Ohioans a real choice at the polls.

"Vote swapping" is antithetical to the functioning of a democratic society and to the entire concept of free elections, where a voter is given the opportunity to cast a vote that coincides with their own political ideals.

We are not in the business of providing either the Democratic or Republican Parties support or encouragement. Nor will we assume that promises of reciprocity will be honored.

We ask our supporters to ignore Democratic Party machinations designed to guarantee a Clinton Presidency. Vote your conscience, vote Stein/Baraka and ensure that we remain a recognized party in the State of Ohio.