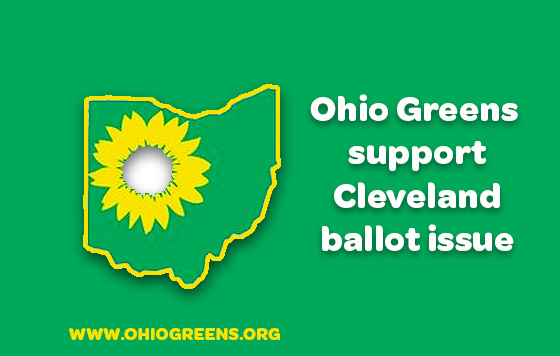 The Green Party of Ohio is dismayed by the efforts of Cleveland city leaders to subvert a ballot initiative that has been approved for a special election this coming May.

These leaders, including Council President Kevin Kelley, have taken the undemocratic step of asking the state legislature to step in and block the vote from occurring through legislative means.

That effort has resulted in the Ohio House passing a bill that includes language that would prevent cities from increasing the minimum wage above the state mandated figure. The Ohio Senate will be voting on the language, included in Senate Bill 331.

We are not taking a stance on the surrounding legal issues of the proposed minimum wage hike, which would apply only to the City of Cleveland, merely offering our support of a ballot issue that received the necessary signatures and was approved for the ballot. The actions of these leaders, both in Cleveland and Columbus, conflict with the process of democratic rule and should be roundly condemned.

It is our position that citizen-backed ballot initiatives are a vital tool by which ordinary citizens can impact laws and ordinances that, more often than not, were initially put into force without much public involvement.

We ask all the elected officials involved to reverse course publicly and announce that efforts to quash this ballot issue are no longer being pursued.

We also ask that the Ohio House and Senate consider legislation that would raise the minimum wage statewide from the current figure of $8.10/hour.