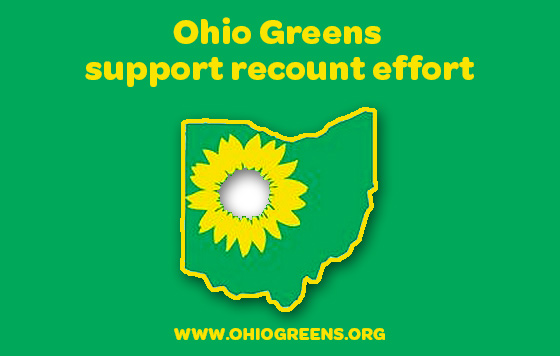 The Green Party of Ohio stands in support of the recount effort that was initiated by Dr. Jill Stein, 2016 Green Party presidential candidate.

It is our firm belief that the reason over 41% of registered voters did not bother to cast a ballot in the latest election, is partially due to distrust of a system that has failed them.

Machine voting with no paper trail, cross-checking, and other incidents of proven voter disenfranchisement have led to voter apathy. The only way to fix the issues in our electoral system is to have a verifiable process where individuals have the confidence that their votes are being counted and their ability to cast those votes is not hindered or impaired by arbitrary or undemocratic stumbling blocks designed to limit voter participation.

Dr. Stein's efforts are precisely what is needed at this point in our history, where the for the 2nd time in the past 16 years, the popular vote plurality and electoral college victory went to different candidates.

In addition the most recent election was rife with statistical irregularities that indicate problems with the election night count occurred in several states.

The Green Party of Ohio therefore backs the recount effort wholeheartedly, with the expectation that whatever issues are uncovered will serve to further the cause of democracy, having every vote count, and fostering trust in our nations electoral procedures.

We also take this opportunity to extend our appreciation to Dr. Stein for running a campaign that embodied the Green Party's 10 Key Values and not relying upon character assassination and fear-mongering, as did the candidates of the two corporate parties.

We realize Dr. Stein's post election efforts have critics, both inside and outside of the Green Party. We respect the right of everyone to engage in vigorous debate regarding the recount, resting easy in our conviction that all involved want the best end result for the Green Party itself and for the voting public.