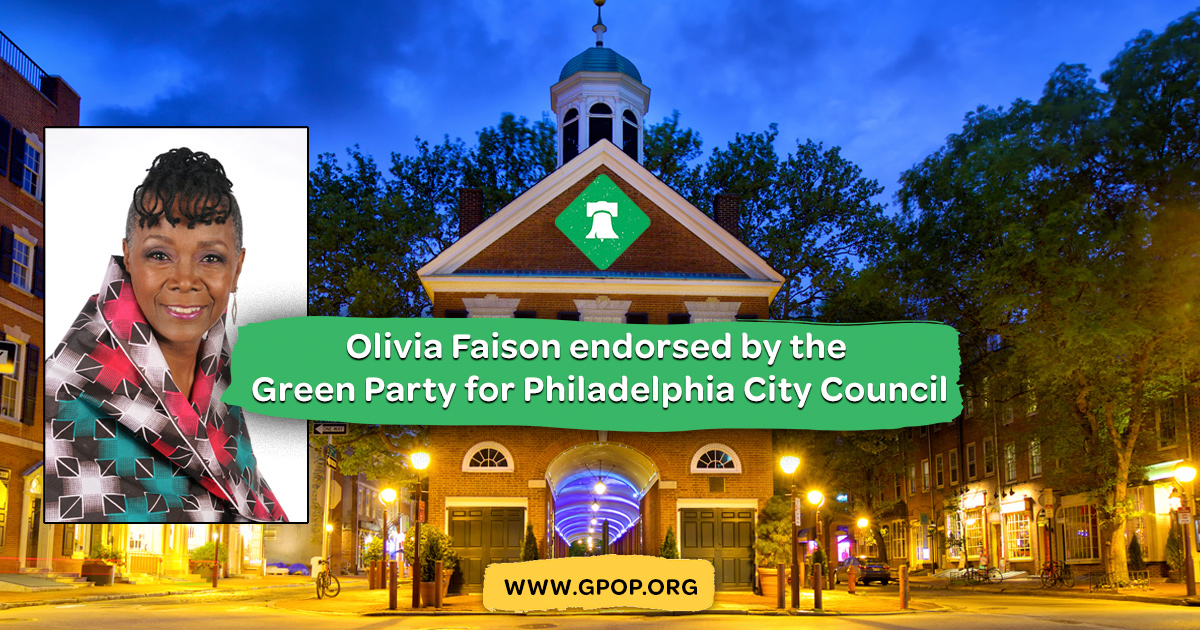 Members of the Green Party of Philadelphia (GPOP) have endorsed their chairperson Olivia Faison, and her campaign for Philadelphia City Council Member-at-Large. The unanimous endorsement took place on February 28, 2019, at the GPOP monthly meeting held at Shissler Recreation Center in Fishtown, Philadelphia.

Faison said, "I plan to run a vigorous campaign, totally invested in representing the interests of all Philadelphia neighborhoods. Although I was not groomed to be a professional politician, I am fully committed to the pillars of the Green Party, and seeing its influence spread throughout the city."
"In addition, I plan to undertake the project of looking into how some of the city's outdated and antiquated laws and practices affect the poor and weaker members of our city in an unjust and unfair manner.” When asked for an example, Faison said, "The way the city is allowed to confiscate personal property has been challenged, and recently changed by the Supreme Court of our nation. We will have to update our laws as well."  Faison also discussed her views on how citizens are prosecuted for minor infractions and misdemeanors, and she also has expressed support for the work that the district attorney is doing to reform Philadelphia’s bail system.
“As a retired analytical chemist, Olivia Faison looks at situations from a different perspective, and offers a fresh approach to problem solving that is missing in City Council," said Wendy Lee Simonsen, newly elected chair of the Green Party of Philadelphia. "I have worked with Olivia on many projects, and I know how hard working and dedicated she is. I was proud to accept the job as her campaign manager."
"We need honorable City Council members who will stand staunchly for grassroots democracy, nonviolence, ecological wisdom, and social justice," said Chris Robinson, a Green Party member from Germantown, referring to the four pillars of the Green Party. "I support Olivia Faison for City Council because I am tired of the do nothing politicians from the two corporate parties".
Olivia Faison is a third generation Philadelphian, and a product of the Philadelphia school system.  She is chair of the Health Center #4 Advisory Committee, and secretary on the Board of Directors for the City of Philadelphia Health Centers. She has served as the inspector of elections at her polling place since 2008. Olivia is also an entrepreneur, currently involved in forging business relations with Mozambique. However, the cap she wears with the most pride is that of block captain, which places her directly in touch with the needs of her neighbors and her community.
Olivia Faison made this appeal, “Please join my campaign for City Council. I remember when this City was known as 'The City of Brotherly Love and Sisterly Affection.' Let us return to that sentiment, because together, we can do this". To volunteer on the Olivia Faison for City Council Campaign, please contact Campaign Chair Wendy Simonsen at 650-389-4213 and wendyleesimonsen-at-gmail-dot-com.
***   END ITEM   ***
Do you like this post?
Tweet