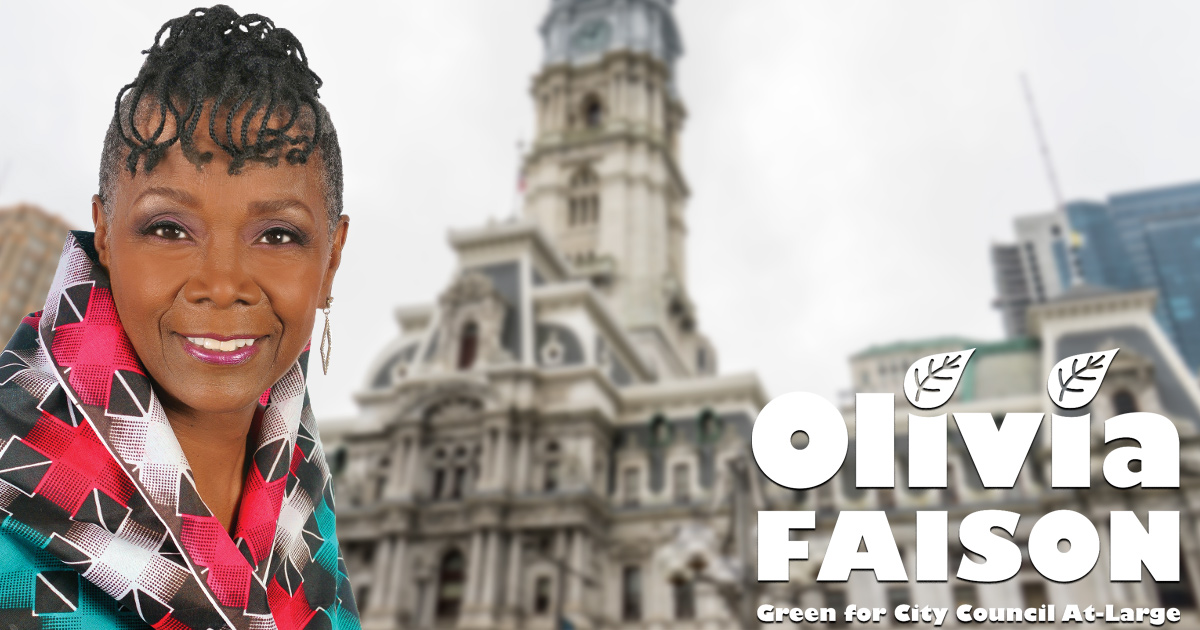 The Committee to Elect Olivia Faison, at-large Green Party candidate for Philadelphia's City Council, has officially filed for candidacy. Although dozens of volunteers collected well over a thousand signatures, Faison will not appear on the ballot on November 5th 2019. In order to access the ballot, Democratic and Republican candidates must gather only 1000 signatures for a City Council at-large campaign.

The barriers for Green Party candidates who reject corporate donations and champion an eco-socialist platform are more complicated and require substantially more signatures. This further underscores the unfair practices through which the corporate political parties attempt to subvert progressive, grassroots parties. The Committee to Elect Olivia Faison turns the page and invites you to join us in Olivia Faison's write-in campaign.

Faison proudly reminds that her grassroots campaign "still resonates with the people of Philadelphia." Faison is calling for a Green New Deal in Philadelphia, a solution to our poverty economy that prioritizes sustainability and equity. She is calling on tax-exempt institutions to make good neighbors payments in acknowledgment for the services that they receive from the City. No less important, she demands an end to the racist policing tactic known as stop and frisk. Hers is a vision that stamps out the greed, corruption, and disinvestment that have ravaged our city and neighborhoods.

Faison's campaign seeks to leverage the minor party mandate, which guarantees that at least two of the seven at-large seats will go to a Republican or minor party candidate. Historically speaking, this has meant that two at-large City Council seats have been occupied by Republicans. We want to change that. We look forward to seeing Faison mount a successful write-in campaign, as she will be a strong ally for the most progressive members of City Council and will help expose the corporate self-interest that permeates city government.

"It is important to support every Green Party candidate," said Chris Robinson, a Green Party member from Germantown, "because our future depends upon the Green Party's solutions to society's problems. Olivia Faison is smart and dedicated, and it was a pleasure to volunteer for her campaign for Philadelphia City Council."

To learn more about Olivia Faison for City Council, visit her website at www.Olivia4Philly.org. For questions or further information, contact the campaign at [email protected].