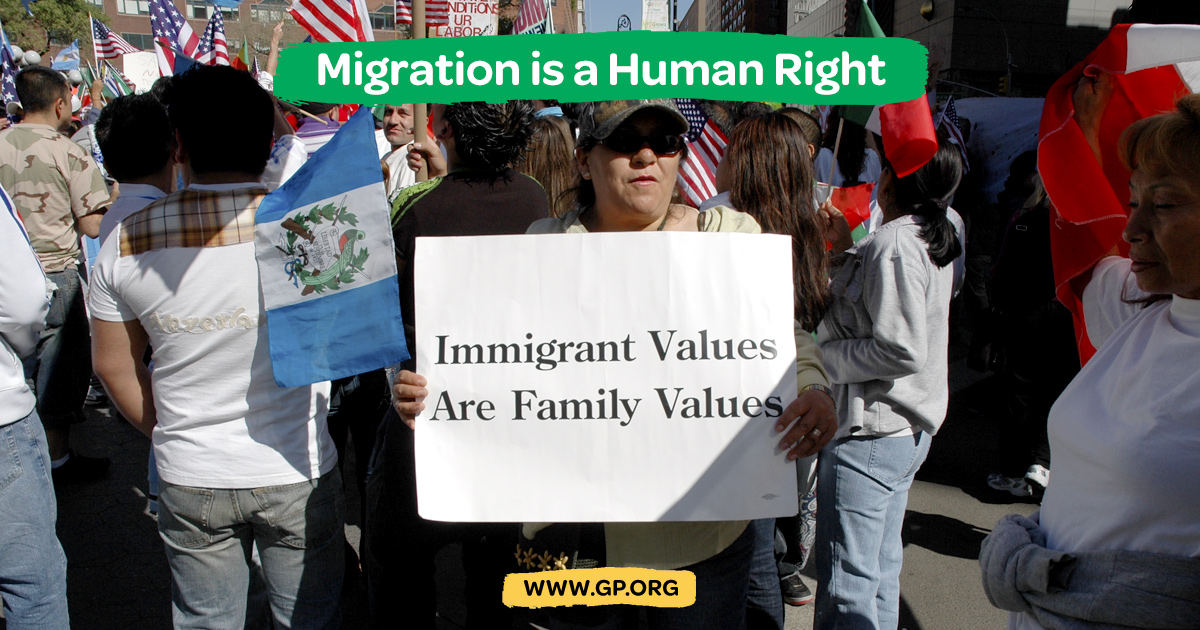 The Green Party of the United States affirms that migration is a human right, and we are outraged by the current situation at the U.S. border regarding the inhumane treatment of children and families seeking refuge from the United States’ imperialist policies visited upon Latin American nations.

Greens are not fooled by the games that the Trump administration now seems to be playing with human lives. His executive order today, while a victory for public activism and direct action in general, seems more an attempt to mollify the public and create a legal situation in which current law regarding the maximum time limit for detention could be challenged.

Additionally, there is no plan for adequate housing of families in detention, or worse still, for reuniting seized children with their families, or even to be kept together beyond the current legal 20 day detention limit, per the 1993 Flores v. Reno Supreme Court case. Neither is there a plan to find the previously reported 1500 children that the administration has lost track of.

“The forcible removal of children from their parents at the Southern border and housed in sub-standard conditions is no less than government sanctioned child abuse and neglect. Transporting these children hundreds of miles away to shelters in New York will make family reunification more challenging. Emotional trauma of this magnitude is cruel and inhumane,” said Gloria Mattera, Green Party National Co-chair and child life-development specialist.

The Green Party does not recognize the indefinite detention of families seeking asylum as an improvement in their circumstances. There are no provisions within this executive order for due process under the law, nor for an orderly or compassionate resolution of their status. Neither does the order make the distinction between legitimate petitions for asylum or other situations in which the U.S. border is crossed without authorization.

The Green Party platform states that, “(a)ll persons fleeing political, racial, religious, or other types of persecution must be welcomed and given permanent resident status. The history of arbitrary denial of political asylum claims must be ended. Particular attention should be given to those minorities who are political exiles and refugees and those whose lives would be at risk if asylum is not granted.”

The Platform goes further to say, “It also must be acknowledged that the trigger for such an influx of immigrants in this country has been largely due to unfair US trade policies. If it were economically possible to provide for their families many would choose to remain in their native countries. Any immigration policy should be seen a way to address all people's humanitarian needs as we undo the damage to local communities and chart a course toward sustainable local economies.”

The influx of refugees crossing the border from nations like Honduras, Guatemala and El Salvador also underscores the role of U.S. foreign policy in creating the conditions for crisis in these countries. While the history of the United States' brutal foreign policy and backing of murderous regimes in Latin American dates back over 100 years, these policies continue today -- such as former Secretary of State Hillary Clinton’s support of the 2009 coup in Honduras -- and are the driving forces of conflict and migration out of the region. “Imperialistic policy compounded with the hypocrisy of the ‘War on Drugs,’ while simultaneously supporting corrupt narco-state oligarchs has created a disastrous situation for much of the Americas” said Green Party National Co-chair, Tony Ndege.

Greens are disgusted by the President’s apparent effort to use these human lives in the balance as political bargaining chips to play against the Democrats, who themselves are incapable of championing a resolution that maintains human rights and a reasonable path to regularization of immigration status.

This situation is yet another atrocity in this country’s long experience with using “law” to tear families apart, from the trade of children under slavery, to Indian boarding schools and even now to the incarceration of Black and brown juveniles charged with adult crimes. The Green Party calls for this nation to finally respect “family values” and stop its imperialist, white supremacist attacks on families and children of the oppressed, both here and abroad, as well as for the shut-down of ICE altogether.