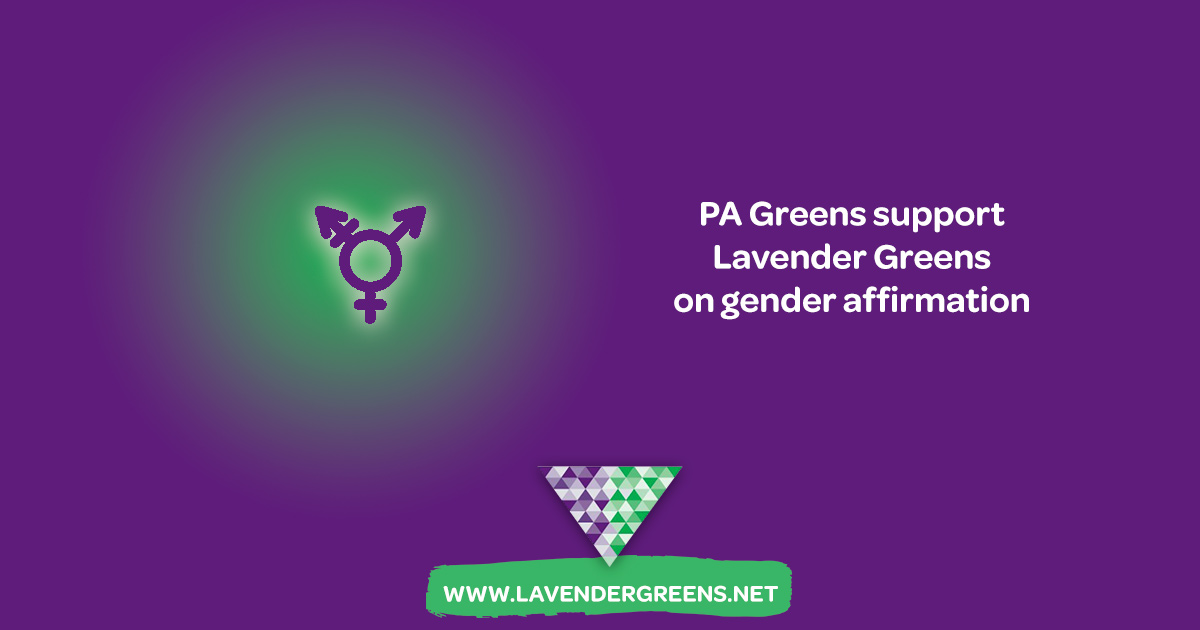 In December 2019, the GGP endorsed the Declaration on the Sex-Based Rights of Women from the Women’s Human Rights Campaign (WHRC), which is a trans-exclusionary feminist organization, meaning they are feminists who do not recognize transgender women as women. Rather, they recognize women based on sex rather than on gender or gender identity.

The WHRC claims women’s rights have been achieved on the basis of sex and any attempt to incorporate gender identity into international human rights documents or national law is an undermining of women’s rights. According to the WHRC, gender identity undermines women’s rights as it “makes socially constructed stereotypes, which organize and maintain women’s inequality, into essential and innate conditions” and allows men to claim they are women in law, policies, and practices.

Lavender Greens, a caucus of the Green Party of the U.S. (GPUS), which is concerned with issues surrounding the Lesbian, Gay, Bisexual, Transgender, Queer, Intersex, and Asexual (LGBTQIA) community, disapproved of the GGP’s endorsement. According to the Lavender Greens, the Declaration on the Sex-Based Rights of Women “is a document intended to deny trans people their bodily autonomy and freedom of expression, against the advice of the vast majority of medical professionals and LGBT advocacy organizations.” Lavender Greens further demanded that the Georgia Greens revoke its endorsement of the WHRC’s declaration, write a formal apology to transgender members of the GPUS, and committ themselves and their members to learning about gender affirmation.

The GGP’s endorsement and Lavender Greens’ response were discussed at GPPA’s spring convention. After discussion, GPPA Treasurer Tim Runkle, who is also the Green Party’s candidate for PA Treasurer, moved to support the Lavender Greens’ statement as-is. The motion was seconded by Garret Wassermann, who is also the Green Party candidate for PA House District 45, and passed by the delegates.

Wasserman later commented, “To fully support the Green Party's 10 Key Values, we must celebrate diversity and be inclusive and welcoming to all genders and sexual orientations, including non-binary and transgender folks who still face misunderstandings in society and even sometimes violent transphobia. The trans-exclusionary language approved by the GGP was very concerning, and I hope that Georgia Greens will engage in dialogue with members of the Lavender Caucus and Greens elsewhere in the party to better understand why the language is not compatible with Green values.”

Tre Schumacher is a member of the Green Party of Pennsylvania steering committee and recording secretary of the Green Party of Philadelphia. The Green Party of PA (GPPA) is an independent political party that stands in opposition to the two corporate parties. GPPA candidates promote public policy based on the Green Party’s four pillars: grassroots democracy, nonviolence, ecological wisdom, and social justice/equal opportunity. For further information about GPPA, please visit www.gpofpa.org or email [email protected]. Please follow GPPA on social media: Facebook and Twitter.