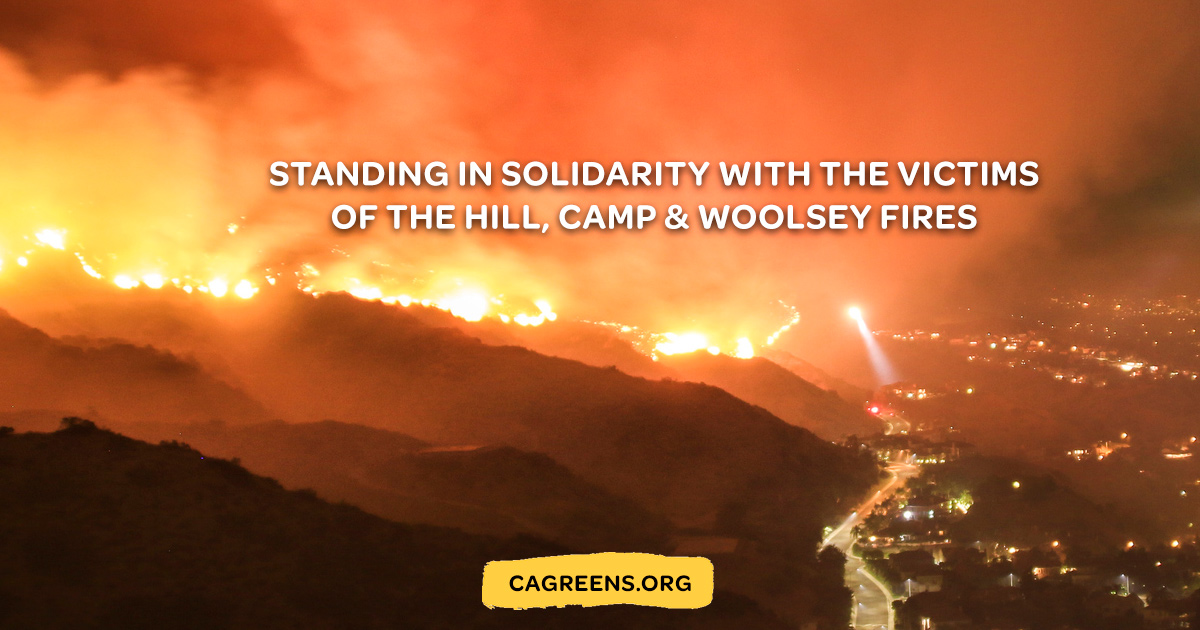 Paradise, CA - The Green Party of California released the following statement today on the current wildfire crisis, and its origins in climate disruption and corporate, for-profit, energy systems and development.

The Green Party of California stands in solidarity with the victims of the Hill, Camp, and Woolsey fires and calls upon the California and U.S. governments to immediately engage all resources and actions necessary to aid the victims of this crisis. We call for the immediate mobilization of all resources to provide emergency field housing, and medical, food, clothing, housing, and sanitation facilities necessary to relieve the suffering of the victims of this horrific and systemic failure. No Evictions of the emergency sites should be contemplated under any circumstances.

No liability costs of monopoly electric utilities responsible for these disastrous fires should be passed from corporations and their stockholders to customers. The utilities have no incentive to prevent future fires, if they do not have to pay the costs of failure to do so.

These wildfires have been driven by climate disruption and corporate greed enabled by a capitalist system that places profit before the needs of people and nature. Profit-driven energy and water systems are now producing catastrophic crises on an almost weekly basis. California forests have suffered decades of drought triggered by the for-profit fossil fuel and other industries which refuse to adopt ecologically sound and sustainable business practices, and sources of energy. Highly fire-prone conditions have combined with urban over-development driven by private real estate profiteers that ignore the interests of working Californians who need affordable, safe, rent controlled housing now. Corporate influenced Governments have underfunded and undermined agencies responsible for preventing and responding to these fires.

Alarmingly, in the case of Woolsey, the wildfire is now exacerbating six decades of failure of the Department of Toxic Substances Control (DTSC) and other agencies to clean up toxic and radioactive soil contamination at the Rocketdyne facility north of Los Angeles – the site of one of the worst nuclear meltdowns in U.S. history. That site is now at the epicenter of the wildfire. We stand in solidarity with the Physicians for Social Responsibility, and Rocketdyne Cleanup Coalition statements on this ecological crisis.

These disasters are mind numbing as isolated occurrences but are frightening on a whole new scale when viewed as the onset of what is becoming the "new normal."

We have reached the endgame failure of profit-driven market insanity. Corporate captured utilities, resources, and financial interests must now be brought under public control to establish policies, planning and infrastructure consistent with public need, not the greed of speculators, developers, and corporations. We must end the private exploitation of California resources, land, and development, and use Public Banks to finance public projects, in our communities, and our state. We must end the corporate cooptation of our regulatory agencies such as the DTSC and the California Public Utilities Commission (CPUC), and institute full democratic public control of state utilities.

Neighborhoods, and communities must control development, not private banks and financiers. The Earth and its needs are a sacred trust to be diligently protected for the good of the public and wildlife (not a basket of commodities to be captured, sold, and exploited). Only when we put people and nature before profits will the Earth and its people even begin to be on a rational and sustainable path.