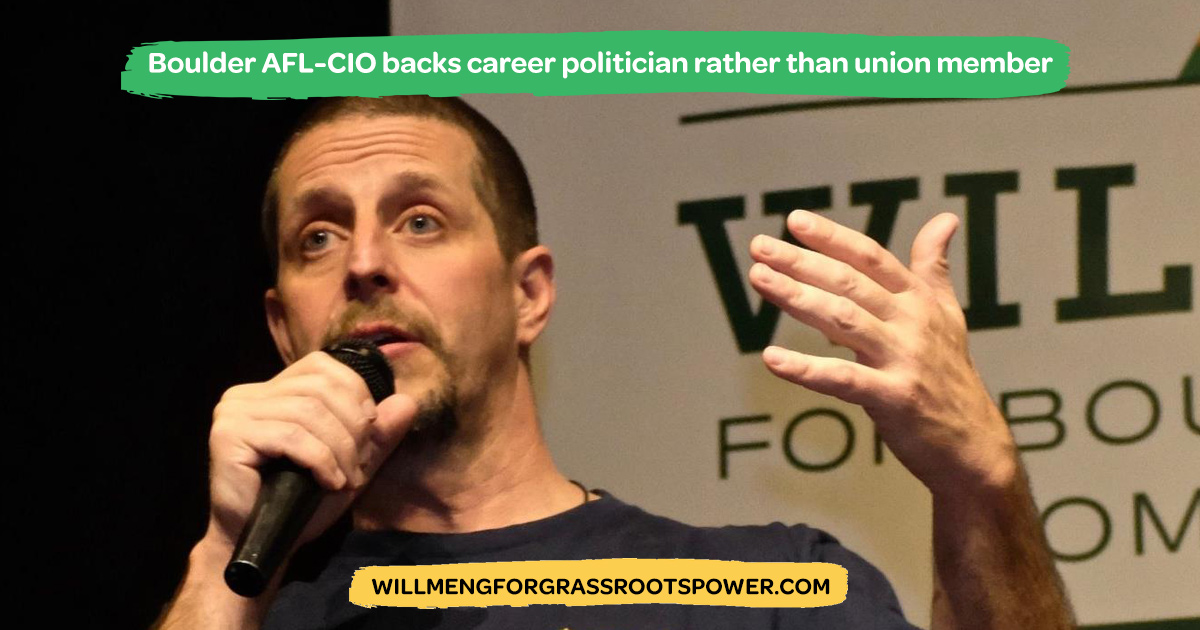 The following was sent to leaders of the Colorado AFL-CIO on September, 17th, 2018. The email responds to the body's rejection of myself as the only union member running for office in Boulder County in favor of the Democratic Party candidate, a professional politician with no union history whatsoever. The maneuver demonstrates the political crisis in the union leadership today, and compelled UFCW Local 7 to withdraw form the body on the principled ground that unions are required to support union members as an immediate political priority.

After six months and many recent events in the Colorado labor movement, I wish to address a few issues related to the state of the AFL-CIO and my candidacy for Boulder County Commissioner as a rank and file union member. I will say upfront that the views expressed here are my own and not the official position of UFCW Local 7, although I am a job steward and an officer on the Local’s executive board. Thank you in advance for your time and for you efforts to build power and strength for working people everywhere.

I will start by saying that it’s quite clear that the working class of the United States and its leadership through organized labor are in an existential crisis and have been for the last 50 years. We can discuss the nature of the crisis, how industry and government have exploited it, how union leadership has responded to it, or any other details, but its existence is thoroughly documented. This prolonged retreat has severely affected the living conditions, ambitions, influence, and general consciousness of working class people, both nationally and internationally. We union members can’t underestimate its profound repercussions.

As a rank and file union member originally in the United Brotherhood of Carpenters and Joiners Local 1 of Chicago, Illinois, and now in UFCW Local 7 as a registered nurse, I’ve done what I can to help end the unions’ retreat, including workplace organizing, unionization campaigns, actions, mobilizations, and ongoing outreach to the rank and file of all unions to strengthen our efforts collectively. Most recently this effort compelled me to run for local office as a rank and file union member.

I decided to run for Boulder County Commissioner to address the multiple issues facing working people from the perspective of a politically independent campaign. Like many other parts of the country, Boulder County is run by a political class of wealthy, connected individuals who exploit their positions for careers and influence to advance their own aims and those of their affiliates. The result: increased power and wealth for the few and increased economic hardship, racial disparity, and disenfranchisement for working class people. Community members across Boulder County asked that I run for Commissioner to address these issues, issues unaddressed by our current political leadership.

Because of the nature of Boulder County politics and the dominance of the Democratic Party, I chose to run as a Green Party candidate. This was a simple decision for me based on my personal and political experiences with the deeply compromised nature of the Democratic Party both in Chicago and Colorado. In my 30 years of community and workplace activism, I’ve seen that any genuine advances for working people require a fight against the Democratic Party. I can elaborate, but for brevity I will simply say that here in Boulder County, it is abundantly clear that the Democratic Party not only offers no answers to the multiple crises of the working class, it, along with the Republicans, the second Wall Street Party, is in fact the origin of those crises. Overcoming the negotiated surrender of workers, communities and the environment will have to come through independent political actions of everyday people. My campaign is one effort to build that power, develop ideas, and confront the escalating challenges everyday people now face.

As a lifelong union member and advocate, I intended to bring the wider union movement into this pivotal effort. Because of my years of community organizing, my campaign allows the banner of union labor to be hoisted into county political life, opening the door to a new fight for working people.

The current AFL-CIO leadership thwarted my efforts immediately. Weeks after I submitted the AFL-CIO questionnaire, Geof Cahoon, President of the Boulder Area Labor Council (BALC), advised me not to proceed with an endorsement interview. When I questioned him, he told me that, although he personally wished me to win the race because of his familiarity with my union activism, the other two members of the committee would take deep issue with my not running as a Democrat, thereby making the interview predetermined and unnecessary as the results were already mathematically concluded. I rejected this advice as a matter of principle and proceeded to schedule the interview.

The endorsement process lasted six months and was punctuated by ongoing maneuvering from brother Cahoon. He originally claimed he supported my candidacy only to abstain from voting because he “had to remain neutral” as a result of his being President of the Boulder Area Labor Council and also an officer of the Democratic Party. When I informed him that his position as a union leader leaves no question about his role as a promoter of working people, he evaded further discussion. The original vote was 3 in favor of endorsement and 2 opposed, which fell short of the 2/3 majority. Only after questioning did I learn that Geof Cahoon abstained from voting altogether, ensuring the 2/3 majority could not be met.

The whole process was embarrassingly confused and evasive. When confronted about the vote by UFCW Local 7 President Kim Cordova, the executive board then informed us that it hadn’t been an official vote but rather a “straw poll” requiring a new vote. Then a phone vote was supposed to take place but never happened because of apparent bylaw issues. A final vote took place in July; Cahoon did apparently vote that time. The result was 5 – 2 in favor of endorsing State Senator Matt Jones, a professional politician, over a union member and activist with one of the strongest labor platforms and histories in the state of Colorado.

The entire process was clearly bent on producing just one outcome. Now, absurdly, the Boulder Area Labor Council is campaigning against the only union member in the county race. This demonstrates the deep crisis and rudderless leadership union membership suffers under today, not only in Boulder County but throughout Colorado and nationwide. The Democratic Party’s politicized use of our union bodies created 50 years of decline in union power.

My position hasn’t changed. After eight months of campaigning, it’s even more clear to me that major shifts in the current union political patterns are desperately needed. Every day that we reject or evade the hard work of building independent political power for our members and the working class is another day that Wall Street strengthens its hold on the country. We’re in a permanent state of retreat only punctuated by some audacious strike actions by rank and file teachers. Nothing has changed at the top at all.

This pattern has to be broken, and it will take real leadership to do so. People are demanding change like no time in history. Labor can and should lead the charge. We have the power to build a new political party for the 99%, to lead waves of strikes and mass mobilizations, and to turn from the current passive and ingratiating forms of political strategy to build an actual labor movement prepared to defeat the offensive of Wall Street.

I would advise the following four steps to be implemented immediately following the midterm elections of 2018:

1. An ending of union funding and aid to both the Republican and Democratic Parties and moving these funds aside for eventual use in community and political organizing.

2. A convening of a national conference of workers and union leaders for the purpose of building an independent political party of the working class as a whole.

4. Resolutions advanced in union locals nationally to support the process of building a mass organization of the working class to coordinate all these efforts.

These are the ideas that form the basis of my campaign and which I hope will assist more independent worker candidates to run for office. I hope these developments can find the leadership and support necessary to break free of our current downward spiral, and I hope we can come together on that basis as soon as possible.

Thank you again for your time and know that I am available for any amount of discussion and conversation as necessary to honor the ideas and developments described here. Please feel encouraged to contact me as often and in whatever manner necessary.