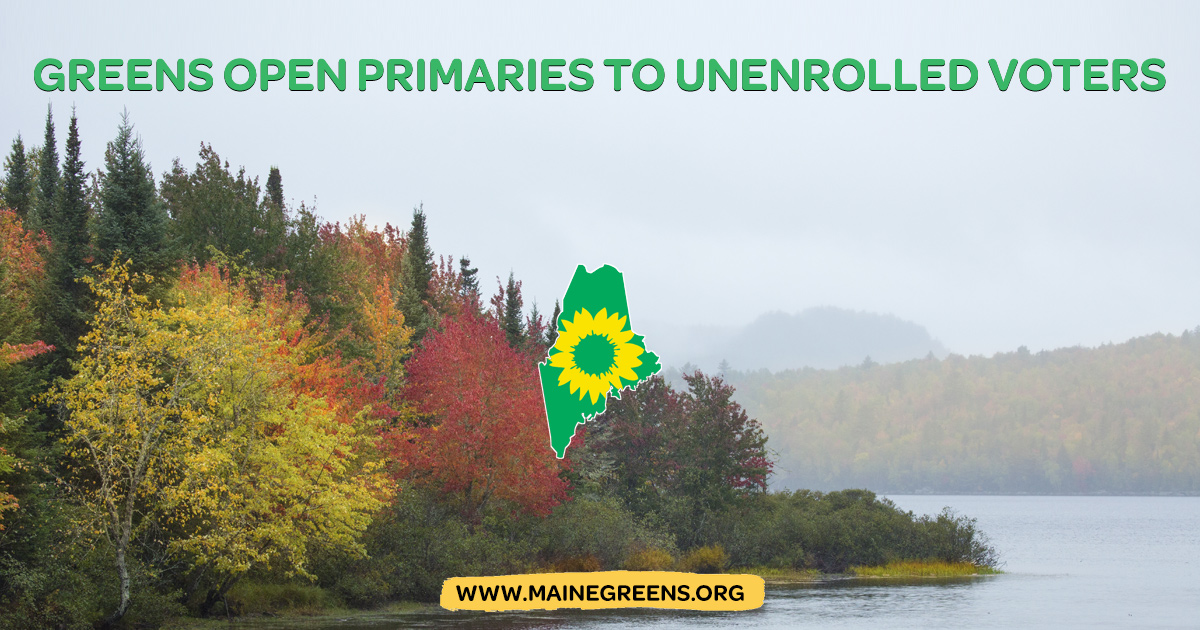 The Maine Green Independent Party voted at its Fall Assembly this month to allow unenrolled voters – commonly referred to as "Independents" – to participate in the party's primary election in 2018.

"The nearly 40 percent of unenrolled Maine voters speaks volumes about the dissatisfaction they have with the corporate parties," said Jon Olsen, one of the party's two co-chairs. "We offer an alternative by allowing them into our primary, agreeing with them that the major parties represent the interests of corporations instead of citizens. We hope they will see the Maine Green Independent Party as 'their' party."

The Democratic and Republican parties close their parties to only voters who are enrolled in their parties. However, Maine statutes allow political parties to broaden eligibility for participation in their primaries. The Maine Green Independent Party was the first political party in Maine to allow unenrolled voters to participate in the primary, when it made the same decision in 2016.

Party officials argue that closed primaries lead to candidates selected by small factions and that candidates represent issues outside mainstream public discourse. By opening its primary, the Maine Green Independent Party encourages participation in the political process and increases awareness of its candidates' positions and backgrounds.

The party, which has nearly 50,000 enrolled members, has previously taken other measures to allow participation in the political process to more than just enrolled party members. Maine statutes specify that delegates to a party convention "must be qualified to vote in the party's primary election unless otherwise permitted by party rules." Several years ago, the party changed its rules to allow Maine immigrants and underage residents to "participate in all aspects of the party … except where prohibited by statute."

According to the party's bylaws, "Lack of citizenship or an inability to register as a voter, whether due to age or other reasons, cannot preclude any interested person from joining the party."

"I thought it was good that our party doesn't mind how old you are to be able to vote," said Americah. "It made me feel proud, because now unenrolled people can vote in the Green Party in Maine."

Riva O'Rourke, co-chair of the party who is also Americah's mother, said, "The Maine Green Independent Party is a growing option for voters disaffected with today's political gamesmanship and rhetoric. With open primaries in 2018, the party hopes more Mainers investigate the ideas and values of its candidates and to help elect candidates that represent the interests of the independent-thinking and forward-looking people of Maine."