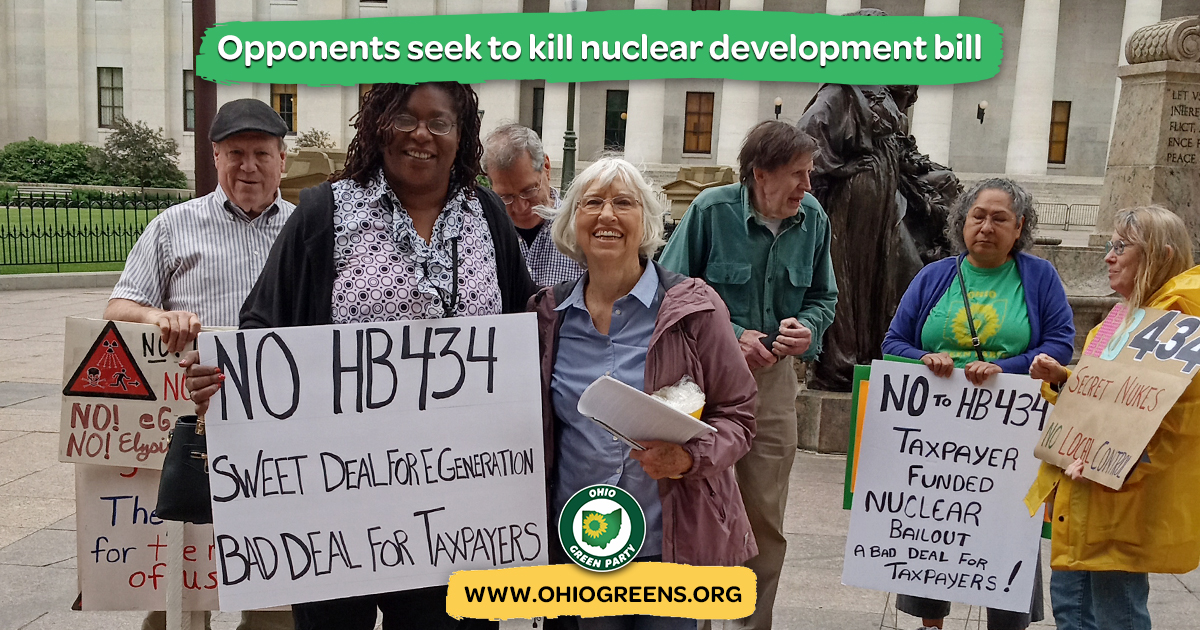 COLUMBUS, OH — A small group on Wednesday protested a bill that backers say could better position Ohio to take advantage of opportunities related to the next generation of nuclear power.

House Bill 434 would create a new state panel to steer potential development. It has already passed the Ohio House of Representatives with strong bipartisan support.

But about 10 members of the Ohio Nuclear Free Network and Ohio Green Party stood in front of the Statehouse to argue that the new Ohio Nuclear Development Authority could lead to secrecy and a "radioactive taxpayer subsidy" supporting a sweetheart deal like the $1 billion bailout of two 1970s-era nuclear power plants that has since been repealed.

"Secret government is a bad thing," said Terry Lodge, the coalition's Toledo attorney. "Secret government in the form of an agency that is cheerleading and promoting unproven, incredibly expensive, and possibly even dangerous technologies is a difficult sticking point for a lot of us."

The Ohio House voted 75-18 in March to pass the bill with the entire northwest Ohio delegation in support. It awaits its first hearing in the Senate Energy and Public Utilities Committee.

Sponsored by Rep. Dick Stein (R., Norwalk), the so-called Advanced Nuclear Technology Helping Energize Mankind Act, or ANTHEM, would create the panel under the umbrella of the Ohio Department of Development. The governor would appoint the board's nine members.

The idea is to position Ohio to take advantage of possible opportunities from the U.S. Department of Energy or the U.S. military for research and development related to advanced and micro reactor technology.

That would most likely mean a molten salt reactor, based on a technology that dates back more than half a century but was later abandoned. It would use spent fuel from existing conventional nuclear power plants and converted radioactive thorium.

"The cost of nuclear energy has been growing in the United States for a myriad of reasons," Edward Pheil, co-founder and chief technology officer of Elysium Industries, a reactor design company, told the House committee in support of the bill earlier this year.

"However, the main driver is the lack of [research and development] incentives and funding to improve a currently half-century-old technology to rebuild the nuclear skills in innovation, design, build, and trade skills, like welding and advanced manufacturing," he said. "Building these skills is a requisite for the success of advanced nuclear, and skills Ohio has and can expand."

The group wants to kill the bill, arguing that it prioritizes nuclear power over other energy sources. A similar measure has passed the House before only to stall in the Senate.

"Nuclear is not the answer," said Lee Blackburn, of Pataskala, Ohio, a coalition member and former Site Specific Advisory Board member at the now closed Piketon uranium enrichment plant. "There is no price tag associated with it. Nuclear has always been prohibitively expensive. Not a single reactor in the U.S. has ever been built on time and on budget."

Opponents cite risks associated with transporting nuclear waste from existing plants to the new reactors and safety concerns over transport of radioactive fuel.

While any such project would first have to get the green light from the federal government, the bill's opponents compare it to House Bill 6. That 2019 law created a $1 billion consumer-funded bailout of the Davis-Besse nuclear plant near Oak Harbor and the Perry plant east of Cleveland.

Opponents argue this bill could lead to a similar sweetheart deal for one business, Cleveland-based eGeneration Foundation, which has pushed for the bill's passage.