Proposal 60: International Resolution of the Green Party of the United States Opposing U.S. Intervention in Cuba 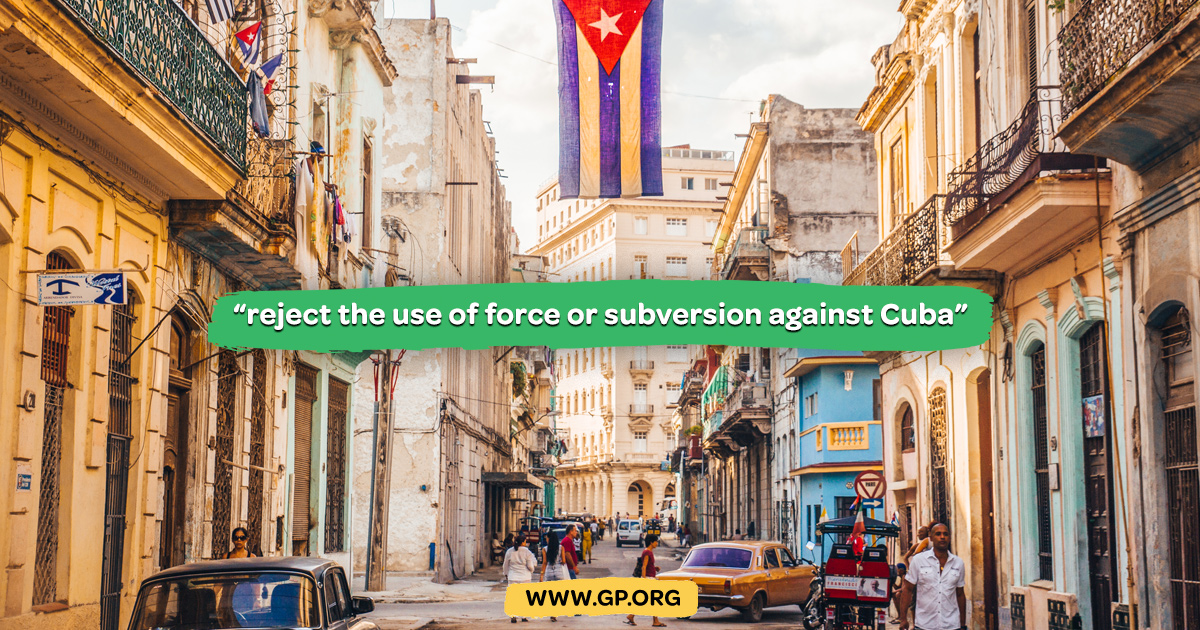 BACKGROUND: REVISION 3 (11/17/03) The proposed policy statement declares and explains the Green Party's opposition to any U.S. intervention in Cuba. The International Committee expects this statement to serve as the basis for national and state party organizing for peace and regional development, coalition-building with kindred organizations, electoral campaign materials, and press statements, and will be submitted to the Platform Committee for inclusion in the 2004 Green Party Platform.

The original statement was drafted by IC member David Schwartzman, of the DC Statehood Green Party. The proposed resolution (Rev. 1) was approved by the International Committee on Monday, October 27, 2003 by a vote of 30-1-3-4 (Yes-No-Abstain-NotVoting). This extensively revised version (Rev. 3) was prepared in response to CC members concerns regarding Rev. 1 and Rev. 2, by IC members Judie Hilke-Lundborg and Bahram Zandi , and IC Co-Chair Tony Affigne , with contributions by other IC members.

PEACE BETWEEN THE PEOPLES OF CUBA AND THE UNITED STATES

The Green Party of the United States hereby declares its strong desire for peaceful relations with the people of Cuba, and greater interchange between our two nations. We call on the U.S. Congress to enact a joint resolution lifting the U.S. embargo and restoring all normal diplomatic relations, and we call for a U.S. pledge not to use military force or political and economic subversion against the Republic of Cuba.

HOSTILE U.S. RHETORIC IS A STEP BACK TO THE COLD WAR

As Greens we are committed to non-violence, democracy, and social justice. Like others in the Americas, we are alarmed by the Cold War-era rhetoric of the U.S. administration. In recent months U.S. officials have said that Iraq was a very good example for Cuba, and accused Cuba of developing bio-weapons which might be shared with terrorists. This claim has been emphatically denied by the Cuban government.

While military intervention in Cuba could be expensive and dangerous for Bush, both militarily and politically, we can expect continued disinformation about weapons of mass destruction, and continued anti-Cuba rhetoric from this administration. The official U.S. military policy remains a doctrine of pre-emptive force and subversion, against rogue states. Thus we are concerned, just as the people of the Caribbean region are concerned, that U.S. policy toward Cuba, during the War on Terror, could take a turn for the worse at any time.

We are also disappointed by the Bush Administrations recent, clumsy attempts to stiffen travel restrictions on U.S. citizens visiting Cuba, thousands of whom are in Cuba each year for study, civil sector assistance, the arts, and trade. We call on our fellow citizens and their organizations to likewise oppose tightened Cuban travel and pledge to continue opposition until the ban is lifted.

As Greens, however, we deplore executions, whether state-ordered killings are used against common criminals, or political dissidents. The tragic execution in April 2003 of three hijackers in Cuba impels us to even more committed action against the death penalty, both here in the US and in Cuba.

This Cuban government action was used by Cubas enemies to advocate extreme U.S. action. The Global Greens Charter, adopted by more than 70 national Green parties in 2001 -- including the Green Party of the United States -- condemns capital punishment and demands its worldwide abolition.

Relations between Cuba and the U.S., in years after the Revolution of 1959, were characterized by U.S.-initiated military attacks, bombings, contamination of crops, and hundreds of attempted assassinations. Mutual hostility once brought the world to the brink of nuclear war.

More recently, conflicts surrounding the ongoing U.S. embargo, the Mariel boatlift, overflights by Cuban expatriates, disagreements over migrant exit and entry policies, and the Elian Gonzalez incident, have kept U.S.-Cuban relations tense and hostile. At the same time, even the U.S. Congress has grown weary of U.S. policy. For three years in a row the House of Representatives voted to end the travel ban on Cuba -- most recently this past September 9, by a vote of 227-188. On October 23 the U.S. Senate adopted the same policy, by a vote of 59-36.

Yet public opinion in the U.S. is divided, with 50% or more in recent surveys supporting continued U.S. hostility, and retention of the embargo. In the spring of 2003 things got worse, following the execution of the hijackers by the Cuban government, and the trial and imprisonment of 75 Cubans convicted of subversion -- for accepting $20 million in U.S. aid.

The entire region is affected. Other countries in the Caribbean -- all of whom have voted in the United Nations to condemn the U.S. embargo -- fear the implications of U.S. diplomatic, economic, and military pressure on Cuba -- easily imagining this pressure directed at their own nations.

In this environment of U.S. militarism, divided U.S. policy and public opinion, and the ongoing economic blockade, the Green Party of the United States recognizes our responsibility to present a clear and principled alternative, helping lead the region to peace and security.

In our Platform, our public statements, and our electoral campaigns, we pledge to advocate full normalcy in U.S.-Cuban diplomatic relations, and peaceful negotiation of lingering issues. We honor the people of Cuba and will treat them with all the respect due any sovereign nation.

We call on the U.S. Congress and President Bush, as well as the U.S. Departments of State and Defense, to reduce tensions in the Caribbean by explicitly rejecting the use of force or subversion against Cuba.

We call for an immediate end to U.S. sanctions. This is not a new position; we are already on record calling for the end of the blockade, as a violation of human rights, preventing food and medicine from reaching people living in a sovereign nation offering no threat to the United States. In this we join world opinion: On Tuesday, November 4, the U.N. General Assembly again voted -- for the 12th time -- to call for an end to the U.S. embargo, this time by a vote of 179-3. Only Israel, the Marshall Islands -- and our own U.S. government -- voted against the resolution.

We reiterate our position: The blockade must end!

We call on the Cuban legislature to abolish the death penalty, and remove this contentious issue once and for all. We join Greens worldwide and many others in the global peace and justice community in condemning the recent executions of three Cubans convicted of hijacking. We urge the Cuban legislature to consider the repeal of capital punishment for any crime, since we hold that capital punishment is a serious violation of human rights, in our own country as well in the rest of the world.

Finally, we call on the people of the United States to recognize Cubas social achievements, and allow further development to proceed without U.S. interference.

Cuba has the lowest infant mortality rate and the longest life expectancy rate in all of Latin America. The World Health Organization calls Cubas free health care system a model for the world. Cuba has the highest literacy rate and the highest average educational level in Latin America. Cubans are world leaders in sustainable development, including organic agriculture and alternative energy.

These positive changes since 1959 deserve the worlds encouragement and acknowledgment. The people of Cuba who have made such progress, deserve a full opportunity to continue, without the external threats of U.S. attacks, or the internal threats of political repression. As Greens, we give our support to all possibilities for greater democracy in Cuba, and we urge that U.S. intervention in Cuba cease.

We affirm our commitment to work for the objectives stated above. We urge the State Green parties, to carry this message to the American people. We must take every opportunity to educate the public about Cubas sovereignty, Cubas achievements, and the importance of opening and normalizing relations between the people of Cuba and the people of the United States. We believe that only this approach will engender a cooperative atmosphere where political freedoms and the interchange of commerce and culture can be expanded.