Proposal 938: in Opposition to Rising Fascism 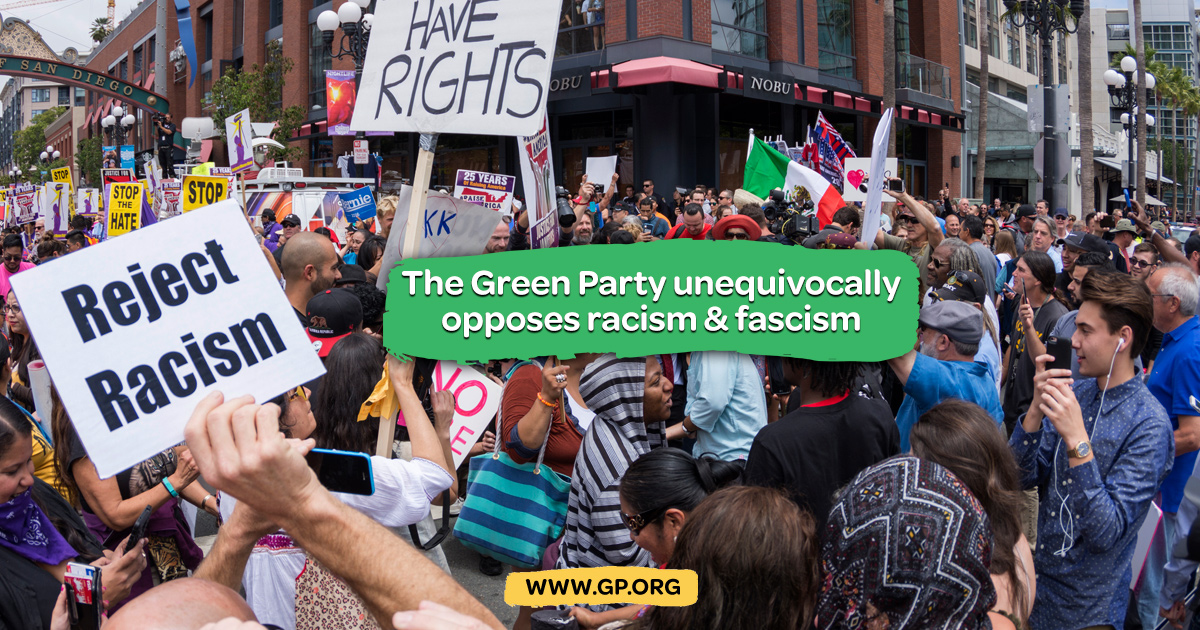 The following text is presented to the Green Party of the United States as a resolution adopted in 2018 in opposition to the growing threat of fascist and white supremacist groups who have escalated their recruitment activities by initiating targeted campaigns of harassment and violence against immigrants, people of color, and left-wing students and professors on university campuses and in communities across the US and beyond.

This resolution goes beyond the standard tactical debate on 'violence vs. non-violence' in opposition to rising fascism, and articulates a meaningful and effective way forward for advocates and practitioners of non-violence to stand up for and protect vulnerable members of the Green Party's core constituencies. Adopting this resolution in word and deed enables the Green Party to become a powerful leading voice in the struggle against fascism and an exemplar for peaceful action in the face of the dangers posed by escalating right-wing violence.

As Howard Zinn said, "Events are already moving in certain deadly directions. To be neutral means to accept that. You can't be neutral on a moving train."
Proposal

The National Committee of the Green Party of the United States adopts the following resolution in opposition to the growing threat of fascism and white supremacy:

I. THE WORLD WE WANT VS. THE REALITIES OF THE CURRENT MOMENT

The Green Party of the United States adheres to the Four Pillars of the International Green Party movement: Peace, Justice, Ecology, and Democracy. As advocates of peace and practitioners of non-violence, we believe that non-violent social transformation is possible and necessary.

We must also acknowledge the challenges presented by our current reality: that we live in a time of profound crisis, in which violence and trauma are integral parts of the world that we are working to change. As a party committed to social justice, we cannot ignore the clear and imminent threats posed by rising right-wing, white supremacist and fascist movements on campuses and in communities across the United States.

The Green Party unequivocally opposes racism and fascism in all its forms: racism as an inherently unjust, undemocratic, and unequal system of organizing society, and fascism as an inherently racist and violent ideology. The goal of a "white ethnostate" proclaimed by many fascist, "alt-right" and right-wing groups today cannot possibly be achieved without sustained and profound violence on people of color, LGBTQIA+ individuals and families, immigrants, women, and designated 'others' deemed by fascists to be unworthy of existing in their society.

These adherents of hate are already beginning to enact their murderous agenda for change: In 2017, fascist and white supremacist groups killed more people than any other extremist group in the United States. Emboldened by the racist rhetoric of extremist politicians in our current government, and enabled by the passivity and silence of others who should know better, the violence wrought by these groups include not only the horrific murder of Heather Heyer and attacks on peaceful clergy and student demonstrators in Charlottesville, VA in August 2017, but also in hate attacks and murders at Transylvania University in Kentucky, the killing of African-American vet Richard B. Collins III at Bowie State University, the shooting rampage and murder of 9 African-American churchgoers perpetrated by Dylann Roof in 2015, and thousands of death threats, hate crimes, and harassment campaigns targeting students, faculty, and vulnerable communities around the country since the 2016 presidential election.

II. DEFINING FASCISM: CRISIS AND THE REINFORCING OF TRADITIONAL INEQUALITIES

We define fascism in terms of a specific, historically conditioned response to a general crisis of capitalist society. From studies of historical fascism (see footnotes), three defining tendencies stand out that distinguish fascism as an ideological and political process (as opposed to simple characterizations of 'authoritarianism'):

A historically specific response to capitalist crisis. Just as when national economic crisis and the global Great Depression of the 1920s and 1930s gave rise to fascist movements throughout the US and Europe, our current state of severe economic insecurity is generating fear and anger among the masses who have been the primary victims of financial volatility and economic slowdown. Unlike socialists, who agitate for greater equality and democracy as a solution to these problems, fascist movements seek to reinforce existing class, racial, and gender hierarchies by exploiting populist anger to dehumanize, expel, and eliminate historically marginalized and vulnerable people.

Increased intervention by the state on behalf of capital and the ruling class. Italian fascist leader Benito Mussolini called it "the fusion of corporations and and the state." In a capitalist crisis, profits are threatened by underconsumption (the inability of people to afford to consume what is being produced). Therefore, capitalists and wealthy individuals increasingly rely on the political redistribution of wealth by the state - not only through tax breaks, deregulation, and privatization of public services, but also direct control and appropriation of public resources for private benefactors. A prime example in our time is Trump's recent appointment of billionaire Betsy DeVos as Secretary of Education, who now wields executive power to divert public education resources to privately owned charter schools and testing companies.

Fascism as a mass movement and a social consensus that enables it. Crucially, what distinguishes fascism from general authoritarianism is the presence of popular movements that embrace fascist ideology; just as the Blackshirts and Brownshirts paved the way for Mussolini and Hitler's rise to power, today's "alt-right" works to push the "Overton Window" of acceptable political discourse to include overt racist, misogynist, and bigoted attitudes, leading a scared and angry public to turn against those who are deemed scapegoats. But extremists are not the only groups that pave the way for a fascist takeover of society. It also relies on the enabling behavior of "Good Germans" - the inaction of non-fascist, 'decent' members of society who, clinging to the old norms of a fragile status quo, fail to stop the wave of extremism that terrorizes people and insinuates itself in the halls of power.

III. ON VIOLENCE, NON-VIOLENCE, AND THE SOCIAL DUTY TO RESIST FASCISM FOR GREENS AND ALL PEOPLE OF CONSCIENCE

The violence already being inflicted on our communities - and the choice of those who resist to physically defend themselves and others against that violence - presents a complex, yet necessary challenge for our practical commitments to non-violence and social justice alike. We personally espouse the principles of non-violence; yet the imperative to protect vulnerable and targeted people in the face of immediate danger has often meant the outsourcing of that violence onto others. As Reverend Logan Rimmel, a nonviolent clergy member who was attacked at Charlottesville, noted: "We cannot claim to be pacifists or nonviolent when our safety requires another to commit violence, and we ask for that safety."

This is our challenge: to be non-violent, yet not remain passive. Until we put our own bodies on the line for our principles in ways that physically keep every human being safe, we cannot be in a position to judge the choices and actions of others who are in the direct line of fire and must defend themselves from murderous, genocidal individuals and groups who invade our communities and threaten our lives.

It is our responsibility as practitioners of non-violence to work within our communities before, during, and after these incidents to keep people safe and make moments of violent confrontation unnecessary. As evidenced in Boston, Berkeley, and elsewhere, a united community who demonstrates a commitment to rejecting fascism wherever it manifests, and stands up to protect the vulnerable amongst us, is one of the most powerful tools we have to combat the terrifying, violent forces of racism and hate.

IV. FOUR THINGS GREENS CAN DO TO FIGHT FASCISM (WITHOUT PUNCHING A NAZI)

As Green Party leaders, we encourage our members and local party organizations to commit to the following actions and priorities in order to meet the challenge of rising fascism in the US:

Amplify the voices of vulnerable and targeted people within our communities.

Help to shift the public discourse about fascism.

Don't settle for the status quo - the point is to change it!

As Greens, we can, and must, demonstrate the possibilities and fulfill the promise of making a just, sustainable, and equitable world that puts people, planet, and peace over profit! Our world now literally depends on it.

Fascism is on the march; and their hateful aggression will not stop unless we stop them – not by punches nor even by armies, but by working together to create a just, equal, and mutually beneficial society in which fascist and white supremacist movements have no room to grow, and ultimately, no reason to exist. Greens everywhere are committed to doing everything in our power to create that society.

Karl Polanyi, The great transformation: the political and economic origins of our time. New York: Farrar and Rinehart Inc, 1944.