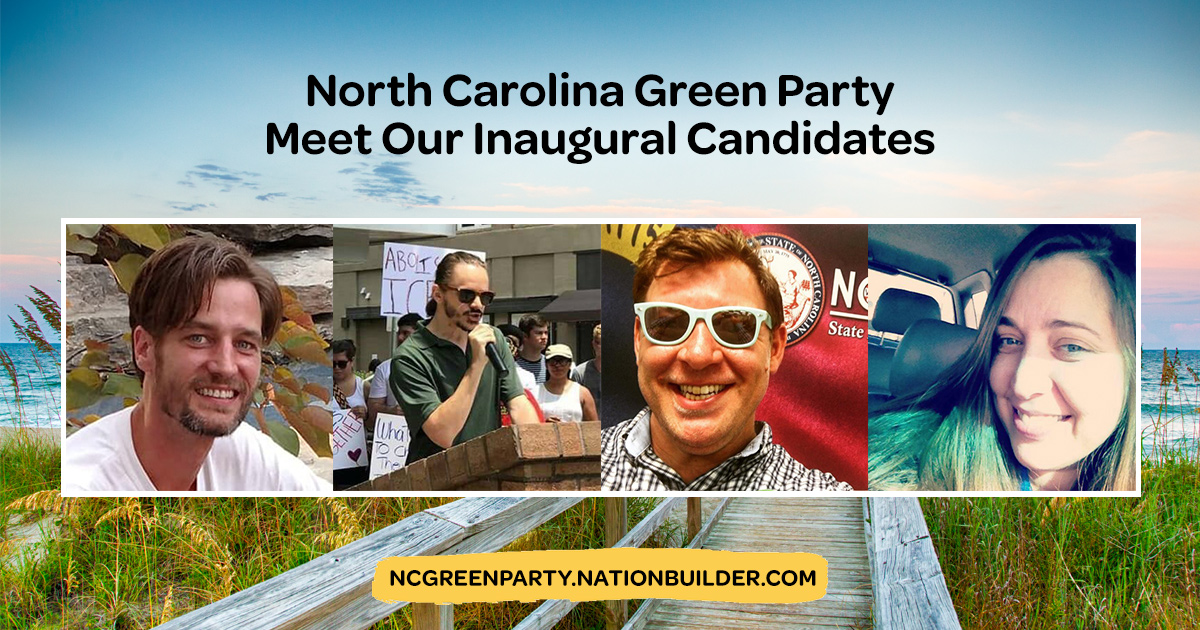 This is a historic year for the North Carolina Green Party! Not only did we win ballot access for the first time, but we're also running our first Green Party candidates on our new GP ballot line. We are the only left-wing political party to be on the NC ballot since the 1980s!

You can support our candidates no matter where you live in the state -- or even if you live out of state -- by donating to our fundraising drive and by volunteering to phonebank, canvass, and help with other campaign needs. Specifically, our goal is to recruit 80 phonebankers and 80 canvassers. Can you be one of them?

Your donation toward our goal of $1,000 will help us fund outreach and events and cover candidate filing fees, and it will help us build a legacy of strong, movement-focused campaigns in North Carolina now and in the years to come.

Meet the four NCGP candidates, volunteer, and donate at www.ncgreenparty.org/2018_candidates. 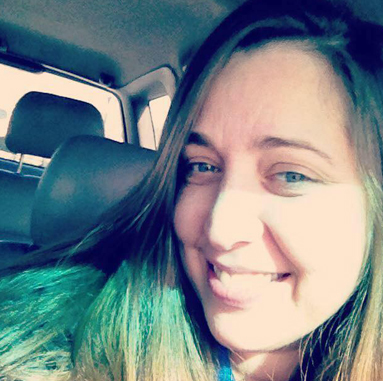 Lilly Taylor, a member of the North Carolina Green Party (NCGP) and lifelong resident of Charlotte, is running for Mecklenburg County Soil & Water Conservation District Supervisor because she wants to protect North Carolina’s water and ecosystems. Lilly has received the NCGP’s endorsement for the nonpartisan office. In recent years she has been involved in activism and community organizing against the ACP, DAPL, and Duke Energy. Lilly, representing herself and the NCGP, gave fiery speeches to the NC Utilities Commision and an organized demonstration outside Duke Energy headquarters earlier this year to speak out against Duke Energy’s proposed rate hikes. These rate hikes were to help pay for the cleanup of Duke Energy’s coal ash spill, which has had long-lasting, horrendous impacts to our water, soil, and ecosystem

Lilly has a long history of activism and has championed for such causes as the March of Dimes, the Crop Walk, the AIDS Walk, the Susan G. Komen Walk for Breast Cancer, and the Leukemia Lymphoma Society, where she raised nearly $10,000, completely free of corporate sponsorship, and ran two half and one full marathon for the Society during that time.

Lilly’s mission is to better the district’s soil and water conditions through awareness and education and by finding sustainable alternatives to single-use plastics, which harm our ecosystems.

Lilly feels strongly that people and planet should come before corporate interests, and she intends to use her position as Mecklenburg Soil & Water District Supervisor to fight on behalf of her community, its constituents, and our life-sustaining resources.

Lilly is a caregiver to her husband of nearly 23 years, and together they have one grown son. She works part time at a local grocery store and is also a nanny. 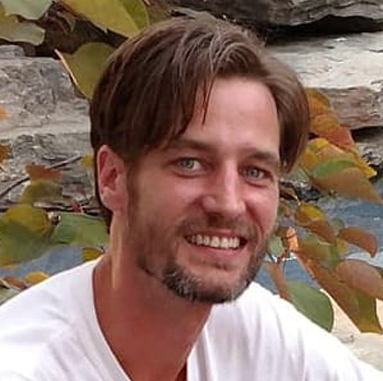 Over the past 30 years, both parties have chipped away at our rights in the workplace. Democrats and Republicans both ignore the working class and poor, and they have their reasons: Our legislature is currently occupied by business owners and industry leaders who pass laws based on their own interests and are unwilling or too inept to serve the most marginalized in our communities.

This campaign is about lifting up the voices of North Carolina workers across the state, and in District 66. It's not just about creating jobs, but creating jobs with livable wages. If elected, I will work tirelessly to raise the minimum wage above $15/hr and to get state investment for worker-owned enterprises—jobs where the worker has ownership of the profit they create with their labor.

I will work to make all levels of education accessible to the most marginalized among us and to eliminate the outrageous debt that students have taken on while ending up in low-paying jobs. I will work to dismantle Duke Energy's monopoly over the state and keep Duke’s money out of our elected representatives’ pockets. I will protect our drinking water, soil, and air quality by working to implement corporate accountability, which would require major polluters such as Duke Energy to pay for their own mismanagement and economic disasters rather than being allowed to pass the financial burden onto struggling North Carolinians.

I will work to implement a moratorium on all power shut offs and on replacing Duke’s monopoly with a public utility. Without the incentive to maximize profits, public utilities will be cheaper for all consumers. I will work to expand the institution of voting, rather than restricting it. We need to abolish the Electoral College, get corporate money out of politics, and stop allowing political partisans of any party to draw district maps. I am an advocate of proportional representation to ensure that non-majority voices are included in the legislative process, and will work to eliminate ballot access laws that create unfair electoral advantages for both corporate parties by shutting out independents and alternative parties.

I was a line cook for 13 years and left the restaurant industry after standing up for coworkers by filing a wage-theft complaint against my employer and speaking out against systemic racism in the industry. Doing so led to my being publicly called an "unemployable" "non-conformist," essentially blackballing me from the industry for speaking out. Since leaving the restaurant industry, I have worked for workers’ rights all across the state, mostly organizing fast-food workers as a part of the Fight for $15 movement. 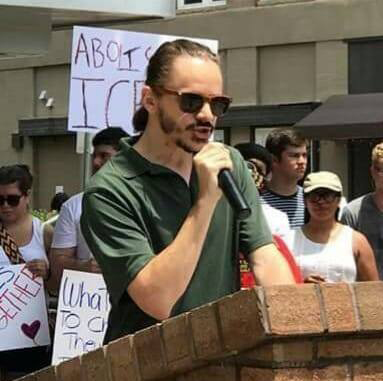 Keenen Altic is a candidate of the North Carolina Green Party, a dues-paying membership organization independent of corporations and the wealthy elite. As a resident of Winston-Salem, he is running for Forsyth County Commissioner At-Large to create rent control tied to wages; stop the county detention center from being used to lock up immigrants; demilitarize the sheriff's department; create property-tax exemption for working-class people and a graduated property-tax increase on the rich, and make the electrical grid powered by renewable energy and democratic ownership.

Graduating with an associate’s degree in Sustainable Technology from Cape Fear Community College in 2015 helped Keenen understand that capitalism is the underlying barrier to social progress and renewable energy—even though that was not the goal of the college. Between temporary jobs he works on renewable energy concepts but is limited by time and resources. All working-class people experience such limits. Overcoming these limits require a political shift that values people over profit.

The Green Party is anti-capitalist and believes democratic ownership of workplaces is necessary in stopping the overproduction causing climate change and pollution. However, to do this, we need to build political power around these ideas, which requires resources. Since capitalism is the current system, we still need money to operate, which is why we ask you to support this campaign with a donation.

But don't stop there! Come and organize with us.

Robert Corriher for US House of Representatives, District 13 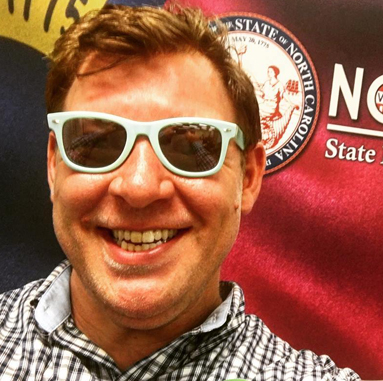 I am running for Congress to build a country that works for all of us—not just the wealthy. Our campaign will bring together people from all over the state to fight for the needs of working families, and we will do it without corporate money. We know what we need to survive, and neither of the two parties in Washington will get it done.

This is no time to retreat to a centrist position; we must fight from the Left:

We need universal healthcare, tuition-free higher education, higher wages, and NO MORE WAR ON DRUGS! Tax revenues should be increased by cutting our military budget, which the Democrats and Republicans will oppose because they are owned by the same Wall Street interests. Taxing the rich is the best way to fund programs we need. For decades the richest 1% have seen their taxes cut, and now it is time for OUR tax cut. Banks got bailed out; we got sold out.

Any donations received by this campaign will go directly to the fight on the ground. We do not have the bloated campaign bureaucracy or party bosses as the two major parties do. We are running this campaign, and you can join us.

We will focus on an agenda that will help struggling workers and their families: