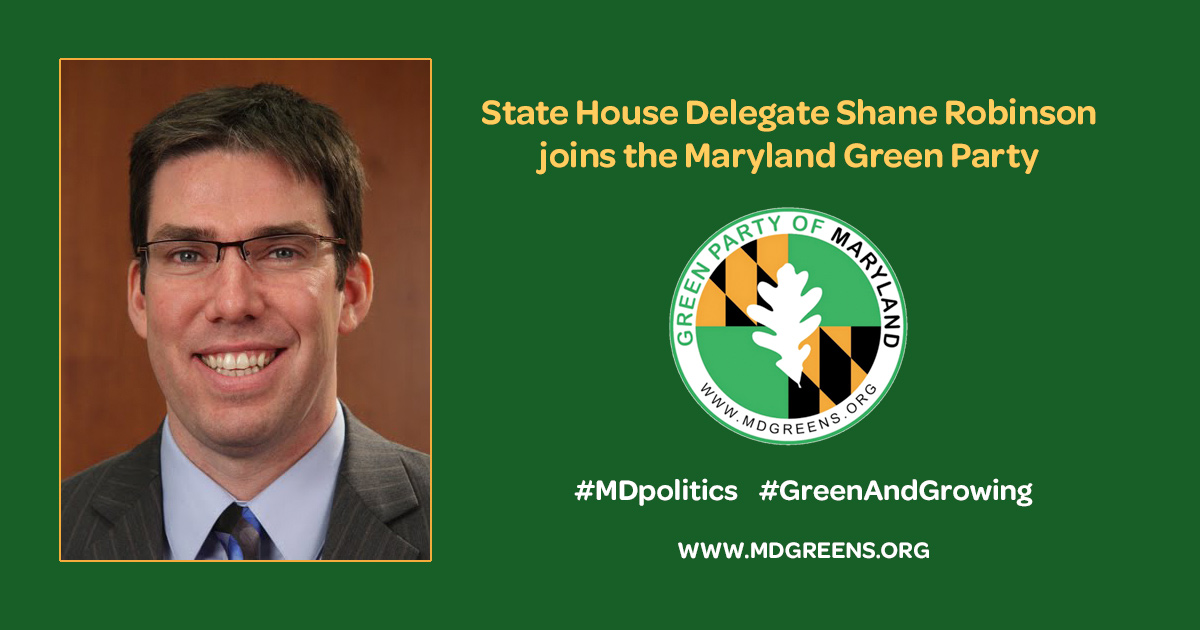 The Maryland Green Party will have its first lawmaker in Annapolis as outgoing Democratic Del. Shane Robinson declared he is switching party affiliations.

"I think the Green Party allows for broader and more radical thinking on some of these issues that are so critical to humans on the planet today," Robinson said Monday in a phone interview an hour after officially changing his party registration. "Now that I'm leaving elected office … I'm looking to be in a party that more accurately matches what I would like to see the world become for my children and every generation that comes after them."

Representing District 39 (Germantown and Montgomery Village) in the House of Delegates as a Democrat since 2010, Robinson, 41, said he felt "a little constrained" on issues such as climate change, social justice, grassroots democracy, decentralization, and emphasizing a "peacetime economy."

"I could try to continue to work within [the Democratic Party] and make it better [and] I think that's a reasonable approach [but] because of my personal views being more aligned with the Greens, I want to be true to myself here and switch parties," said the two-term delegate, who leaves office on Jan. 9.

Having been a Green Party member in the past, he said the decision to switch parties is personal, emphasizing that "I'm also the same person with the same belief system."

Defeated in this year's Democratic primary by Gabriel Acevaro, Lesley Lopez, and incumbent Del. Kirill Reznik (D), Robinson explained that his legislative experience did not directly contribute to his decision to switch parties but added he felt the Democratic Party did not have the urgency to address climate change.

While in Annapolis, Robinson mainly focused on environmental issues and served on the Environment and Transportation Committee as well as the Natural Resources, Agriculture, and Open Space Subcommittee.

Aside from his public service, Robinson works as an environmental consultant and serves as the executive director of The Ehlers-Danlos Society, a nonprofit dedicated to raising awareness on Ehlers-Danlos, a genetic disorder that affects the tissue and joints.

Having run unsuccessfully as a Bernie Sanders delegate in 2016, Robinson added "there's something about the party that is not being translated to the everyday voter in Maryland," in the wake of the divisive 2016 presidential primary election and the establishment's slow backing of gubernatorial nominee Ben Jealous.

Born in Iran to American parents, Robinson, said his past work experience in South Korea, Brazil, Zambia and Poland helped him develop a "deeper cultural understanding" and learn that "[humans] are not separate from our environment but actually a part of it."

Reflecting this year's election results, Robinson said a combination of things led to his defeat but noted that some of his environmental legislation put him "at odds" with the AFL-CIO.

Had he been re-elected, Robinson said he would have remained a Democrat and does not intend to run for elected office in the foreseeable future.

"The primary job of a delegate is to represent your constituents and being part of the majority party has benefits and would allow me to be able to do things for my constituents with a much higher degree of efficacy than if I wasn't in the majority party," he said. "If I was going to serve as a member of the Green Party, I would only do it if I had run as a member of the Green Party because then people would know, up front, what my plans were and make a decision about whether or not to support me."

Robinson said he plans to be active with the party adding, "I don't think there's a broad understanding of what the Green Party is and what it stands for [but] when people read the four pillars and the ten key values, I think most people are going to agree pretty strongly with them."

"I would like to be a part of getting the word out," he said. "This is isn't about … trying to get a critical mass to go out and win elections and that type of thing but you can get enough people involved to be able to move the needle on public policy that affects Marylanders."

Tim Willard, the co-chair of the Montgomery County Green Party and a 2014 and 2018 candidate for the County Council, wrote the "the Maryland Green Party is glad to welcome Del Robinson into the party."

"We are working hard to build a genuine alternative to the major parties. We are growing around the state and are now the second party in Baltimore City," he added in an email Monday evening. "With major unsolved problems such as climate change, as well as ongoing social justice issues, the Green Party will continue to work for real change."

Reznik, who finished ahead of Robinson in the Democratic Primary by 154 votes, praised Robinson as a colleague.

"His contributions, including helping to ban fracking, taking antibiotics out of livestock, and helping to contribute to the clean energy economy, will have a significant impact on the well-being of the people of Maryland and will outlast the service of many of us," Reznik stated in an email. "If he feels more at home as a member of the Green Party, then I wish him well. His intellect, energy, and passion is always welcome back in the Democratic Party if he should ever choose to return."