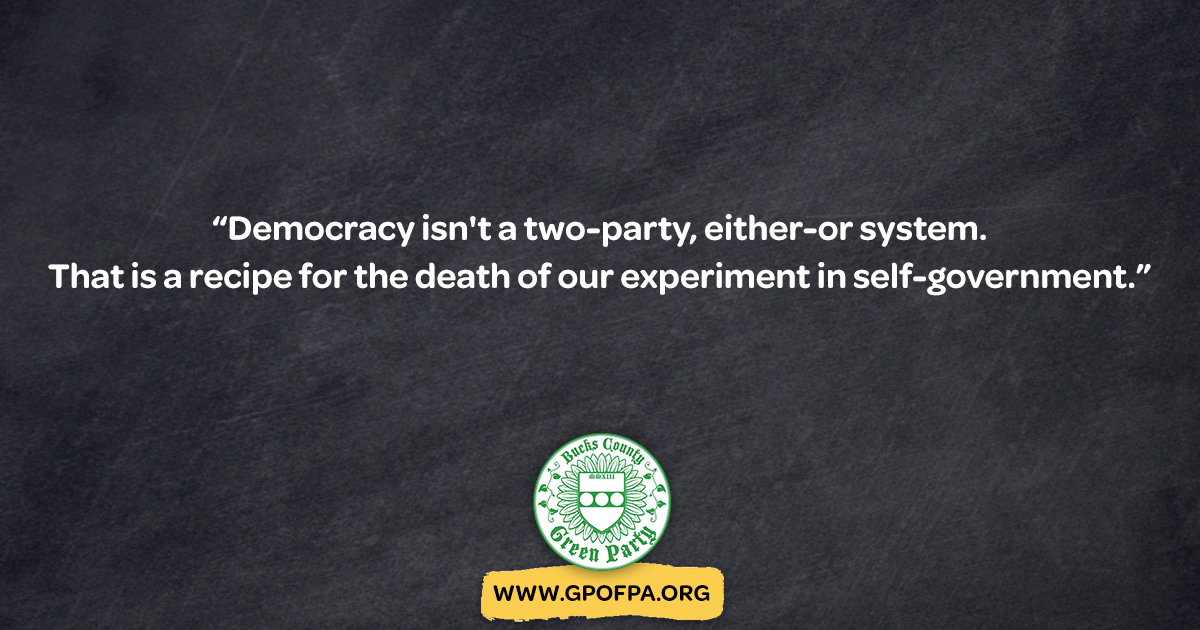 We need to stop the industrial assault on ecology that's promoted by the two political parties that claim total control over our government with no other parties' input. That's exactly what happened in the last presidential election here in Pennsylvania.

As to the idea that we are a minority party and we're wasting our vote, what a vile disgusting attitude. Consider the view from our neighbors up north.

"A different point of view from a Canadian Green about starting and where you wind up. I started voting Green here in Canada when they were getting .4% of the national vote. I faced much the same criticism from others as people voting Green do in the U.S. today in that. 'they can never win; they will never be viable why vote for them?'"

It has taken many years and their support grew at a glacial pace but they now get close to 7% of the national vote and now have three seats in parliament. That was said even as those glaciers are vanishing, support for them does grow. I get infuriated at the pace of this change at times and at leaders like Justin Trudeau and Joe Biden who talk about climate change but do nothing about it. All that said, many still say, "7% means nothing, they will never gain power so why vote for them?"

Here is the thing: The liberals and the New Democratic Party in Canada note this 7% and know it can mean the difference between winning a given riding or losing it. Both parties now have much stronger support for Green Party initiatives.

It will likely not be enough in the time we got left but this a major reason I believe that people in the U.S. that support the Green Party platform act collectively to start voting for them. The truth on climate change has to be acted on and not kicked further down the road.

The point is coming up with ways to treat each other and the Earth that get us off the road to the collapse of humanity and ecology. The two major parties have failed to preserve and protect our only home in search of profit and campaign money. The last administration struck the words "climate change" from our national conversation for four years, and to what end?

The most effective change to counter climate change would be cutting the military in half or more. The military consumes half of the oil we use daily to "project/protect power." Will either party support that?

George Washington, in his farewell address, warned against political parties, and nowhere are they mentioned in our Constitution. Other advanced democracies have more than two parties in their government to their benefit. This also coincides with Greens' belief in non-violence.

We just witnessed what happens when one of the two parties comes to believe they alone have the right to rule. True grassroots democracy — our number one value — requires all voices receive equal attention in the government market place, then let the people decide.

Democracy isn't a two-party, either-or system. That is a recipe for death of our experiment in self-government. So, shame on those who prevented an alternate view of being debated and allowed to be voted on in the last Pennsylvania election. So, I would encourage each of you to register Green, Vote Green and run as a Green. Voting in an either-or election between two corporate-sponsored candidates is choosing between the lessor of two evils.

Being allowed to vote Green is a vote for a sustainable future for our children's children. We don't accept contributions from corporations or corporate funded PACs.

Terry J. Beitl is the chair of Bucks County Greens. He lives in Pipersville.