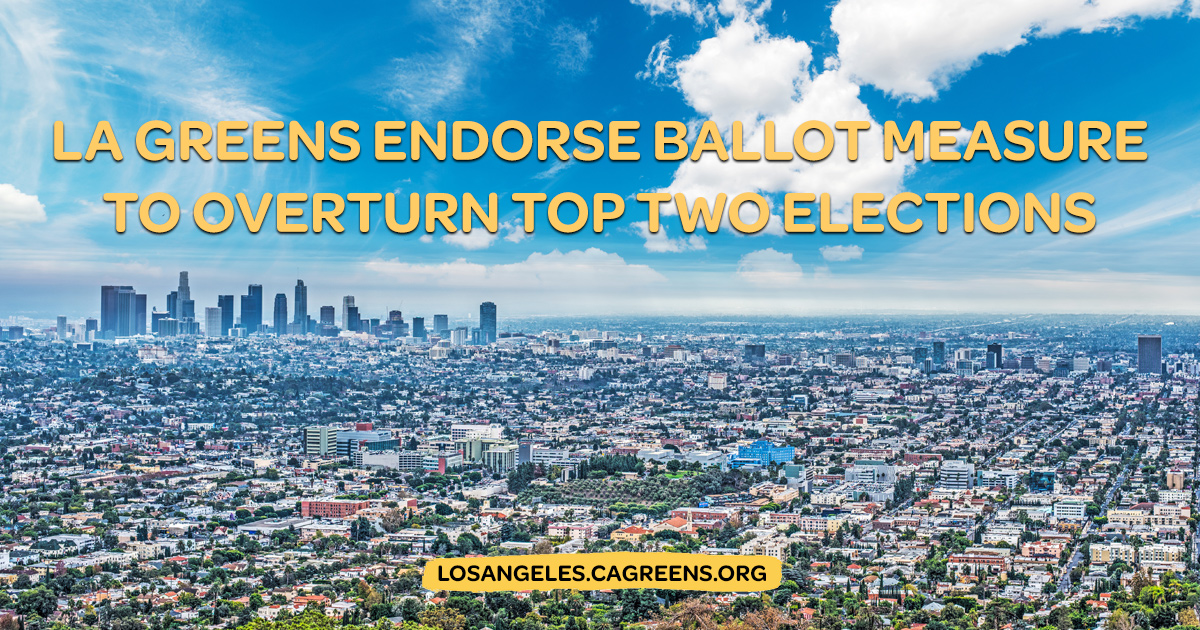 The Green Party of California (GPCA) and the Green Party of Los Angeles County (GPLAC) have endorsed the Initiative to Repeal The Top Two Candidates Open Primary Law – a ballot measure that would overturn Top Two elections in California.

"Californians deserve more choice in elections, not less," says Michael Feinstein, former Mayor of Santa Monica and co-founder of the Green Party of California. "Top Two elections undermine democracy by limiting voters to only two general election choices, while driving up the cost of running for office and making ballot access more difficult.

"The reduction in choice from Top Two has led to historically low voter turnout," adds Timeka Drew, a Green and a democracy foundation executive director living in Leimert Park "When few voters participate, the legitimacy and representative nature of our democracy is diminished."

Top Two elections have been particularly bad for California's smaller ballot status parties like the Greens, Libertarians, Peace and Freedom, and American Independent Parties. Top Two has it made virtually impossible for their candidates to be on the general election ballot and substantially more difficult to qualify for the primary ballot. This has led to all-time lows in candidates from these parties under Top Two – from an average of 127 candidates combined for all four parties per primary election between 1992 and 2010 - to only 13 for all four parties in 2016 - another way in which Top Two reduces voter choice http://www.sacbee.com/opinion/op-ed/soapbox/article81520547.html http://web.archive.org/web/20140718133241/http://www.sacbee.com/2014/05/06/6380742/viewpoints-top-two-primary-system.html.

The Initiative to Repeal The Top Two Candidates Open Primary Law was submitted to the Office of the Attorney General on August 10, 2017 for official Title and Summary. Organized efforts are now underway to gather the needed 365,880 signatures to place it on the November 2018.

At the November 11-12 GPCA state meeting in Ventura, Stop Two representatives led a workshop on the initiative and handed out petitions. The Green Party of Los Angeles County encourages its members to get involved in the signature-gathering effort at www.stoptop2.com and by contacting Jeanne Llewellyn and Victoria Davidson and Eileen Clary.

The GPCA originally opposed Proposition 14 in June 2010 – the Top Two ballot measure – and notes that Top Two's negative impact upon the state's smaller ballot status parties was not part of the Official Title and Summary presented to voters, and not something voters were asked to consider when voting upon it. The GPCA has continued to oppose Top Two since, and calls for its repeal and replacement by a system of multi-seat districts with proportional representation for the California state legislature, and ranked choice voting for single-seat executive office.

The GPLAC County Council endorsed the Initiative to Real The Top Two Candidates Open Primary Law on September 10th and the GPCA state Coordinating Commitee endorsed it on September 11th.