Green Party: PA DEP Should Do Its Job 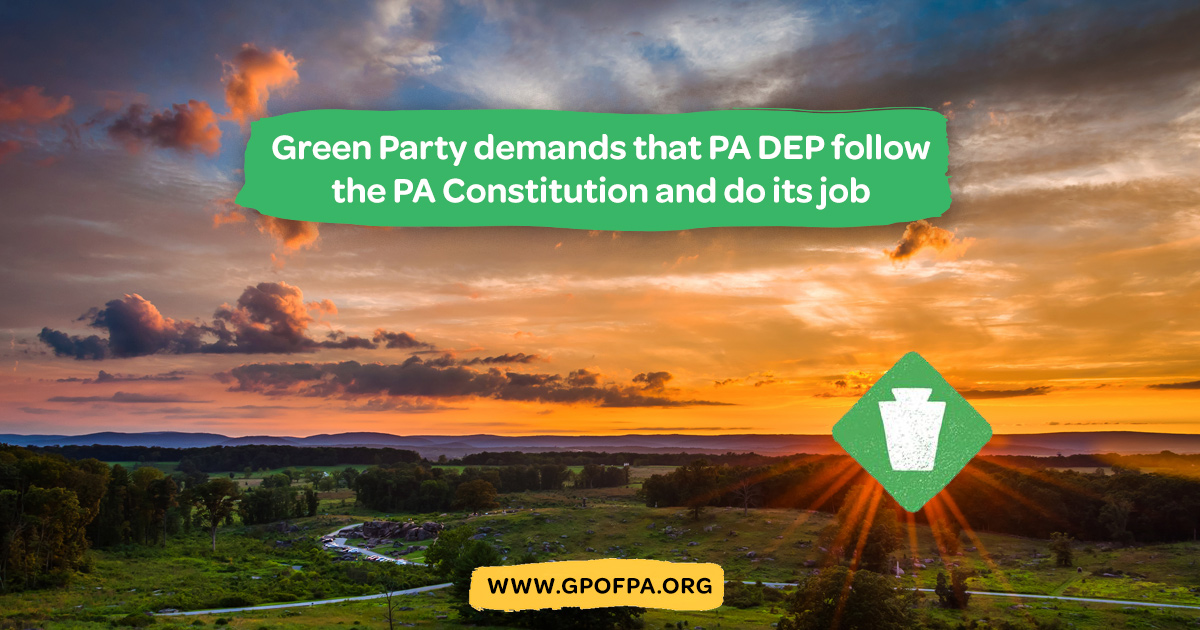 Philadelphia – Article I, section 27 of the Pennsylvania Constitution provides as follows: “The people have a right to clean air, pure water, and to the preservation of the natural, scenic, historic and aesthetic values of the environment.”

On the evening of March 26, U.S. District Court Judge Rudolph Contreras made a landmark decision blocking fracking on 300,000 acres in Wyoming, ruling that the Department of the Interior illegally failed to consider the climate impacts of leasing land to oil and gas developers.

On the evening of March 27, the Pennsylvania Department of Environmental Protection (PA DEP) will hear public comment in Braddock, PA, on whether to grant a permit to Merrion Gas & Oil to turn the former US Steel Mill site into a fracking site.

This scientific evidence is abundantly available in numerous reputable sources. The following examples are from a Forbes article published in 2017:

"Fracking chemicals are harmful to pregnant women and their developing babies. West Virginia researchers found endocrine-disrupting chemicals in surface waters near wastewater disposal sites; these types of chemicals can hurt the developing fetus even when present at very low concentrations.

"A Hopkins/Geisinger study looked at records of almost 11,000 women with newborns who lived near fracking sites and found a 40% increased chance of having a premature baby and a 30% risk of having the pregnancy be classified as “high-risk,” though they controlled for socioeconomic status and other risk factors. Contributing factors likely include air and water pollution, and stress from the noise and traffic (1,000 tankers/well on average).

"Other studies have found that the noise from the drilling itself, the gas compressors, other heavy equipment, and the truck traffic is high enough to disturb sleep, cause stress and increase high blood pressure. Longer-term exposure to noise pollution contributes to endocrine abnormalities and diabetes, heart disease, stress and depression, and has been linked to learning difficulties in children. Sleep deprivation has pervasive public health consequences, from causing accidents to chronic diseases.

"An epidemiologic study from University of Pennsylvania and Columbia University compared the hospitalization rates between a county with active fracking and a neighboring county without. This study found that fracking well density was significantly associated with higher inpatient hospitalization for cardiac or neurologic problems. There was also an association between skin conditions, cancer and urologic problems and the proximity of homes to active wells."

The GPPA demands that the PA DEP deny the permit sought by Merrion Gas & Oil because the ecological and public health costs are tremendous. GPPA further demands that PA DEP follow the PA Constitution and do its job to protect the environment and residents of this state.

The former site of the US Steel Mill should be cleaned up and made into a space that will honor our Constitution and the health of the residents of PA. The site should be made into a park, a space for regenerative agriculture, and a space for the generation of renewable energy. People and planet must be placed before profit.

For More Information:
Forbes, Fracking is dangerous to your health