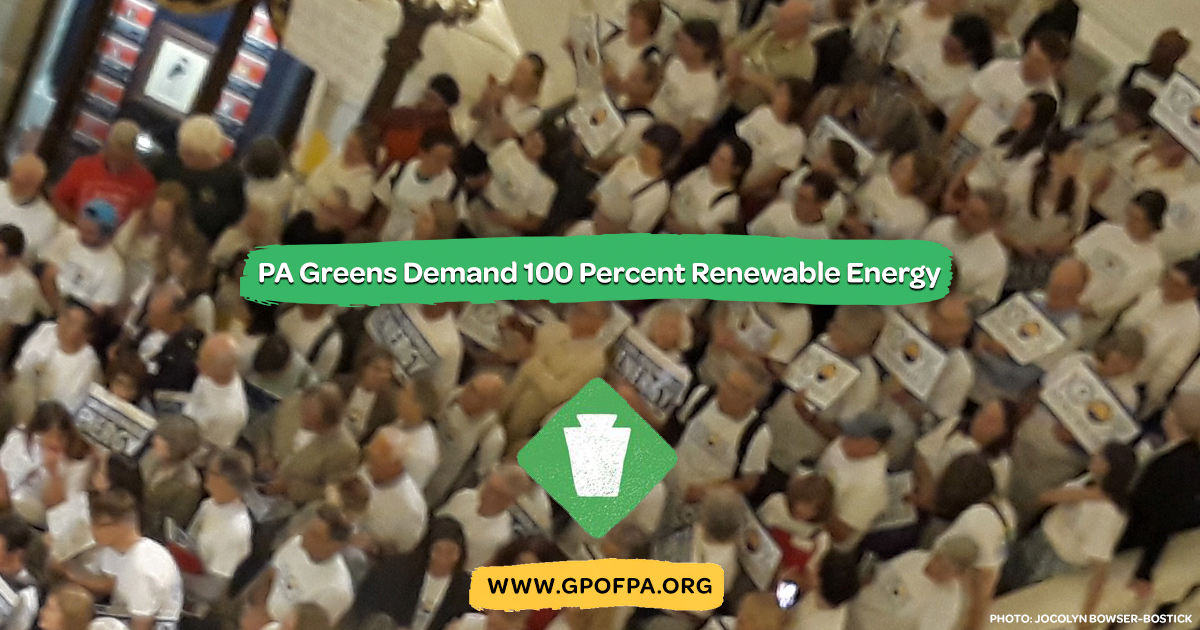 Hundreds of Pennsylvanians from Erie to Philadelphia, and everywhere in between, converged on the capitol building in Harrisburg on June 19 for PA's largest Environmental Lobby Day. Chair Doug Mason, of the Centre County Green Party, said, “Citizens attending the Lobby Day came from more than 35 counties to call for a transition to 100 percent renewable energy on a timeline called for by the scientific community. Throughout the day, constituents visited more than 160 legislative offices, to discuss how this transition could tackle the climate emergency, save consumers money, and create clean-energy jobs.”

The attendees were advocating for House Bill (HB) 1425 and Senate Bill (SB) 630, awaiting action in the PA General Assembly, which would require the Commonwealth to achieve 100 percent renewable energy by 2050. Mason added, “The legislation has bipartisan support from 20 PA Senators and 70 PA Representatives. Dedicated lobbying at Environmental Lobby Day, sponsored by PennEnvironment, prompted five additional State Reps and one additional State Senator to sign on as co-sponsors of the bills.”

Chair Jocolyn Bowser-Bostick, Delaware County Green Party, continued, “This legislation is worthy of strong support from all Pennsylvanians because it is a significant first step in diminishing to zero the pollution we experience from fossil fuels. It will help us achieve a healthier and safer future with a sincere commitment to greater energy efficiency and a total reliance on clean and renewable forms of energy.”

The rally inside the Capitol rotunda was kicked off by Flora Cardoni, climate defender campaign director for PennEnvironment, "It's time for politicians to stop listening to fossil fuel lobbyists, who are holding our planet hostage with 19th century technologies. They need to listen to their constituents who want to tap into our 21st century solutions to climate change."

Pennsylvania's 100 percent renewable legislation is the only bill of its kind in the nation with a Republican as its primary sponsor. "Moving PA to 100 percent renewable energy means thousands of new jobs for workers and a cleaner environment for our families," said State Senator Tom Killion (R, Chester/Delaware), lead sponsor of SB 630. "We must embrace the renewable energy revolution that is unfolding around the country. Our economic future and the health of our citizens and environment depend upon it."

“Although this legislation doesn’t address all the societal changes that are needed or highlighted in the Green Party’s Real Green New Deal, it is a commendable change in direction for some of the major-party politicians,” explained Bowser-Bostick. “Unlike Green Party policies these bills don’t tackle social justice or environmental racism or prioritize the creation of green jobs in communities of color and low-income communities. HB 1425 and SB 630 do emphasize job training, education and job placement assistance for PA residents to work in the clean energy and energy efficiency businesses. They will also fund programs to benefit people facing the burdens of climate impact and fossil fuel workers who get displaced as the economy consumes greater amounts of renewable energy.”

“More than 125 municipalities have signed onto the Ready for 100 Campaign organized by the Sierra Club,” explained Mason. “I am also chair of the Sierra Club Moshannon Group, and I sit on the state chapter's Executive Committee. The momentum for 100 percent renewable energy has been growing across the nation. Four states have already passed legislation to go to 100 percent renewable energy, and nine other states have introduced similar legislation.”

"The solution to fixing the threat to our children's health from air pollution is the same as fixing the global ecological catastrophe of plastic pollution and the planetary climate crisis threatening humans and all life forms,” said Dr. Ned Ketyer, a pediatrician and board member of Physicians for Social Responsibility. “The solution is to stop extracting and burning fossil fuels and instead make other arrangements for energy, transportation, agriculture, and materials with 100 percent clean, sustainable, renewable energy."

"I worry a lot about what my future will look like if we don't do something about climate change," said Caia Farrell, the ten year old South Philadelphian who closed the rally for Kids Air Force. "In 2050, I will be 41 years old. What will my life, and my friends' lives, look like by then if we don't act now? I think about this every day, and I'm just a kid. We need grownups to do their part and help protect the planet."

The afternoon was spent lobbying legislators. A dozen from central PA met with an employee of State Senator Jake Corman (R-Bellefonte), the powerful leader of his party in the senate. They felt rushed in their comments, and left Corman's office feeling that, at best, the aide would report that a dozen “enviros” stopped by in support of Senator Killion's bill.

Three constituents were pleasantly surprised when State Representative Rich Irvin (R-Spruce Creek) unexpectedly agreed to meet with them. While Irvin refused to agree to support HB 1425 ("The technology isn't there yet."), he did agree that climate change is happening, and he is opposed to bailing out commercial nuclear reactors in PA.

“I got to speak one-on-one with my state representative, a cosponsor,” said Bowser-Bostick. “For the first time, I could let him know that even more needs to be done to help the people of Chester live with a lot less pollution. They will have better health outcomes by closing its dirty energy and highly polluting industries. I am happy that I went because the large presence of constituents convinced more legislators to cosponsor these bills.”

Absolutely no one was in State Representative Kerry Benninghoff's office to accept a packet of material outlining HB 1425, but Nancy Parks, conservation chair of Sierra Club Moshannon Group, cornered Benninghoff (R-Bellefonte) to press her concerns while he was waiting in line in the cafeteria.

Chair Neal Gale, Montgomery County Green Party, lobbied Representatives Ben Sanchez and Steve McCarter (both D-Montgomery). He also met with State Senator, Art Haywood’s (D-Montgomery/Philadelphia) legislative assistant. “What stood out the most was that all three were already co-sponsors of their chamber’s respective bills. There was no lobbying required.” Gale continued, “We did, however, spend our time with these legislators, describing our own reasons for working on the issue of climate disruption and the crisis unfolding around us, day by day. And in response we heard not only positive feedback, but honest, heart-felt empathetic agreement. I believe they all get it.”

“As I left the capital,” reported Gale, who ran as the Green Party candidate for U.S. Senate in 2018, “it occurred to me that there is a momentum building across the state. It began several years ago with grassroots organizations developing resolutions and action plans in their communities to transition to 100% renewable energy. The state government is winding its way in that direction, slowly, but surely. Could it be possible that the federal government might follow in a years’ time? That would certainly be helpful, but clearly not essential. The people are going to make this transition happen, regardless!”

Gale continued, “As more and more Green Party members become involved at the local level to foster this great transition, it will evolve to include all the necessary, multifaceted elements for success – social and economic justice as well as environmental wisdom, forming the basis and natural condition of our society. One could almost feel it.”