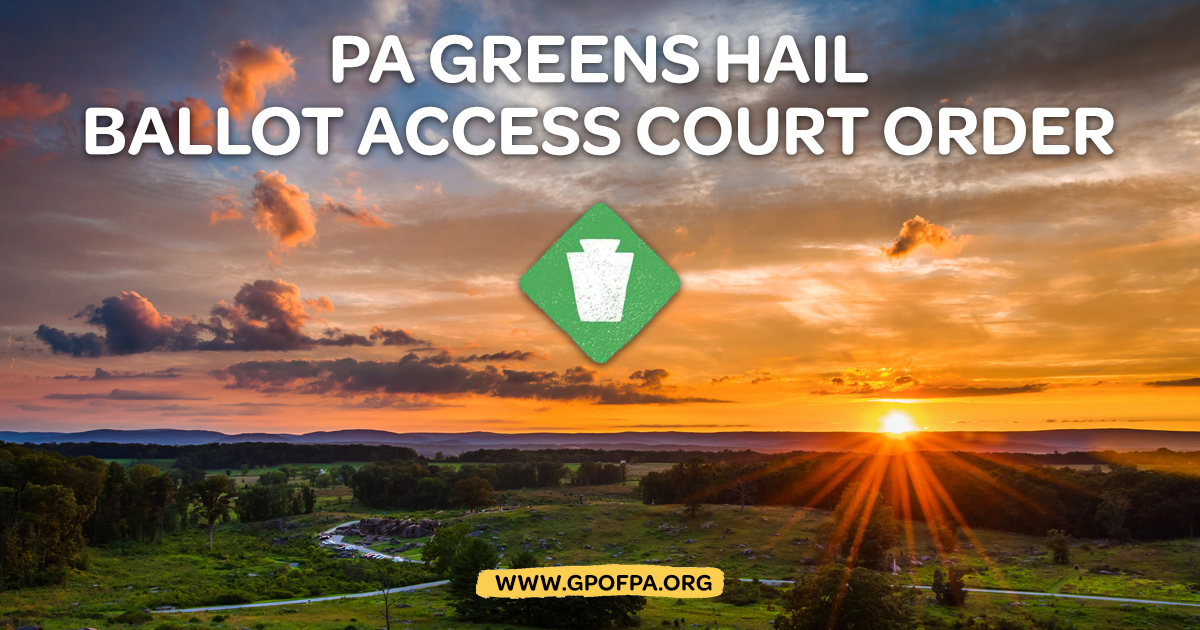 The Green Party of Pennsylvania is praising a Federal Court Order, issued Thursday February 1, 2018 by Chief Judge, Lawrence Stengel. The Order brings an end to six years of litigation, regarding Pennsylvania’s restrictive ballot access requirements for third party and independent candidates, resulting in major reform of those requirements.

The party considers it a major win for democracy, and it extends congratulations and appreciation to their attorney, Oliver Hall with the Center of Competitive Democracy, Washington, DC. In addition, the Green Party thanks its co-plaintiffs, the Libertarian and Constitution Parties of Pennsylvania.

"Basically, the case results changed the requirements for the total number of signatures a third party candidate in a statewide office race must gain in order to qualify for a ballot position in the general election; lowering those totals to 5,000, or 2,500 voter signatures depending on which office is sought. The original ruling was issued in July of 2016, but, despite its lowering the signature threshold, it imposed a requirement to obtain a minimum number of signatures in several counties. Thursday's Order removes the county-distribution requirement." said David Ochmanowicz Jr., Green Party of Pennsylvania Media Coordinator.

“This decision represents a complete victory in the court case, and a major victory for democracy,” said Green Party of Pennsylvania Chair, Sheri Miller. "Since the 2016 Order, Greens have fielded candidates for statewide elections, including Jules Mermelstein, a 2017 Green Party candidate for Judge of the Superior Court. We look forward to offering candidates for Pennsylvania voters who are committed to peace, justice, ecology, and grassroots democracy," she said.

The case also disposes of the practice of assessing fees and costs on candidates that do not prevail in a petition challenge. Besides previously requiring candidates to get tens of thousands of signatures, Pennsylvania was also infamous for imposing legal fees and court costs on candidates who lost petition challenges. Most notable are the cases of Independent Presidential candidate, Ralph Nader (2004) and Green Party US Senate candidate, Carl Romanelli (2006), who both were charged more than $80,000 in costs and fees. Romanelli is also a plaintiff in this case.

"It is exciting to see this historic victory for ballot access in Pennsylvania. It is not easy to prevail in a court case like this, so the magnitude of this correction should not be overlooked. This is a day that, not only our adversaries, but also our friends, never thought we'd see. It also shows that folks of varied political views can come together for the betterment of all. However, there is still much work to be done, both in policy and in matters of election integrity and voting justice," Romanelli said.

The case has been full of ups and downs, as it was originally dismissed by Judge Stengel, who decided the third parties lacked standing to bring the action. That decision was appealed, and in 2015 the Third Circuit Court of Appeals overturned the dismissal. This case was again in front of the Third Circuit in 2017, and again the third party plaintiffs won, resulting in the February 1st Final Order. The terms of Order will be the standard until the Pennsylvania General Assembly acts to correct the constitutional violations in the Election Code.

"Although we are thrilled with the outcome of this case, there is still much to do. For example, this ruling does not change the standard for candidates for Congress. That means that Green Party candidates for the US House of Representatives are still subject to 2% of the highest vote in the previous election. We truly hope the legislature will act and properly reform our state's election issues," said, Jocolyn Bowser-Bostick, Green Party of Pennsylvania Steering Committee Member.

The Green Party of Pennsylvania, an independent political party that stands in opposition to the two corporate parties, promotes grassroots democracy, social justice, nonviolence, and ecology.

For further insight on the actions that the Green Party of Pennsylvania is taking to improve our democracy and serve the needs of the people, please visit www.gpofpa.org