With No Objections - PA Greens Make It On the Ballot 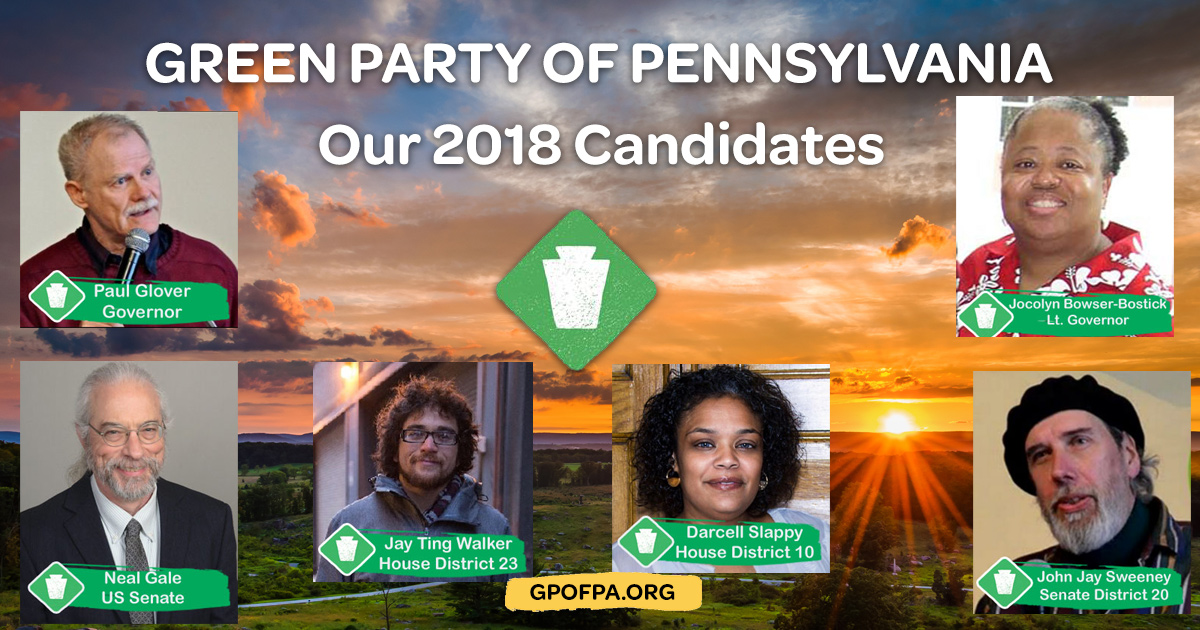 Thanks to the support of our wonderful volunteers the petitions for our six Green candidates to gain access to the November election ballot have passed the test without objection!  This ensures that Pennsylvanians have an opportunity to vote for candidates who will promote public policy based on the four pillars of the Green Party: Grassroots Democracy, Social Justice, Nonviolence, and Ecological Wisdom.

Our candidates now need your support to propel their campaigns to the finish line. Please be sure to follow and share their information on social media, volunteer for their campaigns, and donate when you can to help our candidates.  Details of our ballot qualified candidates are below and a list of resources is at the end of this email for you to connect with these candidates running for office in 2018.

Our slate of state-wide candidates include the gubernatorial ticket of Paul Glover for Governor and Jocolyn Bowser-Bostick for Lieutenant Governor as well as Neal Gale for U.S. Senate.  They each are entering a four-way race for their prospective offices against candidates from the Republican, Democratic, and Libertarian Parties.  Paul, Jocolyn, and Neal are the only candidates in the state-wide elections who will refuse to receive corporate PAC donations or money tied to the fossil fuel industries.  They stand as the sole representation for grassroots democracy in these races and will bring forward the issues of healthcare, green jobs creation, clean energy, and future-focused sustainability that their competitors will not discuss.

In State Senate District 20, John "Jay" Sweeney is challenging the Republican incumbent Lisa Baker.  We congratulate Jay on qualifying for the ballot and returning to face Senator Baker who had previously prevented him from running against her in 2014 by using the courts to remove his from the race.  Jay has been endorsed by Our Revolution PA and is running with the support of many Wyoming County Democrats as their party was unable put forward a candidate during this election. Jay is focused on improving our electoral system and ensuring we have healthy communities by moving towards clean energy jobs that protect our environment.

We welcome Darcelle Slappy, who has picked up our ballot line to represent a progressive voice in State Representative District 10.  Darcelle is running against Republican incumbent Aaron Bernstine. Because Representative Bernstine removed the Democratic candidate by first challenging their primary petition and then taking their nomination, Darcelle stands as the only progressive choice in the race and has strong local support from the Progressive Democrats of America.  Darcelle’s primary platform items include education, healthcare, and job creation.

Jay Ting Walker will be challenging Democratic incumbent Dan Frankel in State Representative District 23.  Representative Frankel has not faced a contested race since 2010 and Jay will appear on the ballot against him with no Republican challenger.  Jay is a member of the Democratic Socialists of America and an engaged local advocate for fair elections, health care, and civic engagement.