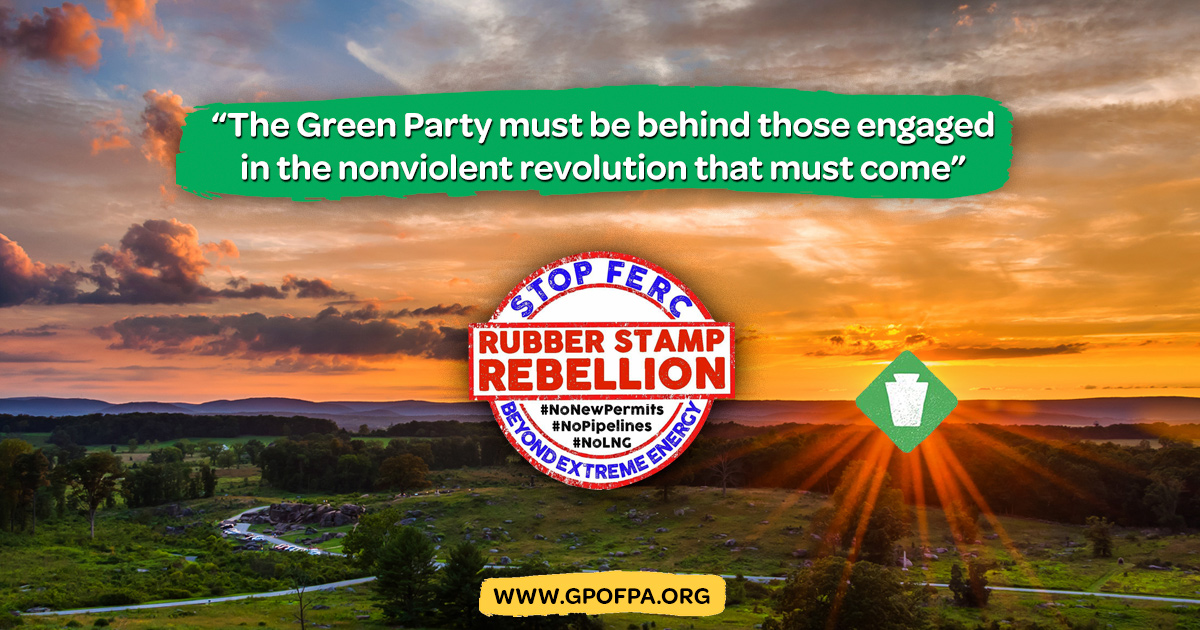 PHILADELPHIA – On December 1, the Steering Committee of the Green Party of Pennsylvania (GPPA) endorsed the formation of a Federal Renewable Energy Commission (FREC). This newly created national agency would have the mission of organizing the Green New Deal and creating a sustainable energy structure for the U.S.

"The creation of FREC has been demanded by Beyond Extreme Energy (BXE), an activist organization, to replace the Federal Energy Regulatory Commission (FERC)," reported GPPA Co-chair Sheri Miller of Adams County. "For the last forty years, FERC has been under the thumb of the fossil fuel industry. With the current climate crisis, we must sweep out the old structure which has brought the world to the brink of destruction. The GPPA Steering Committee recognizes that Green New Deal proposals are not enough; we also need a new governing structure."

GPPA Co-Chair Alan Smith of Chester County added, "The Green Party would like to see the new FREC have the combined missions of reducing greenhouse gas emissions and shifting to a renewable, jobs-creating, justice-based and energy efficient power grid and economy. Clearly, we want the leadership of the new FREC to be personally and professionally committed to the historic task of shifting rapidly to renewable energy. Those leaders should be chosen based on their experience with and commitment to renewable energy."

"The Green Party's support for this BXE initiative gives me heart," said the Green Party's Michael Bagdes-Canning, elected member of the Cherry Valley Borough Council in Butler County. "As a grandparent living in the shale fields and as a long-time frack fighter, I applaud BXE's proposal to turn FERC into FREC. This does two important things, it spells out in stark terms the corruption of FERC, and it articulates a vision for the future. The Green Party must be behind those engaged in the nonviolent revolution that must come."

"FREC will have to focus entirely on renewable energy for our economy, as quickly as possible," said Garret Wasserman, vice-chair of the Green Party of Allegheny County. "Imagine how quickly we could get to 100% renewable energy if all of the fossil fuel subsidies were put into renewable energy construction instead. A recent working paper by the International Monetary Fund says, 'In absolute terms, China was still, by far, the largest subsidizer [of fossil fuel] in 2015 (at $1.4 trillion), followed by the U.S. (at $649 billion).' I believe this goal fits well within the values of the Green Party and hope that signing on to the BXE initiative will help bring solidarity with the petitioning groups and concrete ideas to the public discussion around implementing a Green New Deal."

BXE has asked supporting organization to sign their petition, "The Green New Deal Must Include a Federal Renewable Energy Commission to Replace FERC."