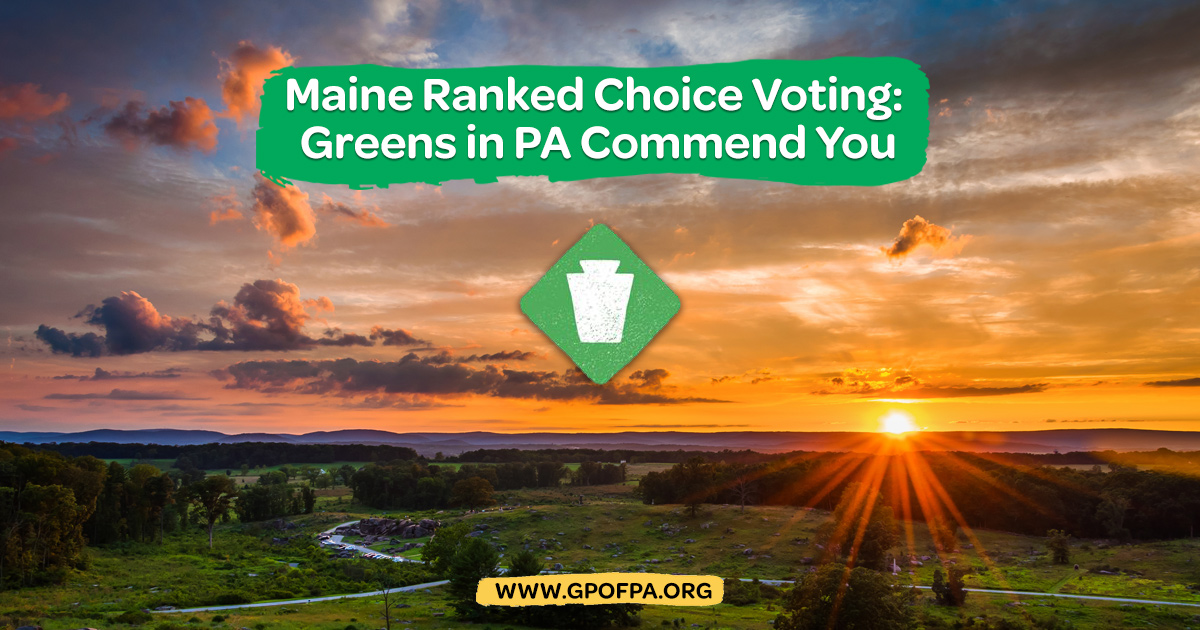 The Green Party of Pennsylvania is celebrating Maine's landmark win for representative democracy on June 12th when the citizens approved a measure that adopts ranked choice voting for all state elections.

Ranked choice voting, also known as instant runoff voting, allows voters to rank their candidates in order of preference. If no candidate gets at least 50% of the vote, then there is no majority winner. The candidates with very few votes are dropped out and the top candidates continue in an instant runoff process: If a voter's first choice is dropped out, then their second choice receives their vote.

This process continues until a single candidate receives over 50% of the vote. This ensures that all winning candidates are elected by a majority and not just a plurality. It also allows voters to choose candidates who truly represent their beliefs and values without the fear of helping a candidate they do not like, eliminating the perceived "spoiler effect" and "lesser evil" voting strategies that ultimately result in less representative government.

This win shows the determination of Maine citizens to take back control of their government. Ranked choice voting was actually passed in 2016 by referendum vote. However, in October 2017, right before the general election in November, the law was repealed in a special, late-night session of the Maine legislature. In February 2018, the people of Maine collected more than 80,000 signatures in 88 days to place a People's Veto on the June 12, 2018 ballot to protect the people's Ranked Choice Voting law. Sheri Miller, Green Party of Pennsylvania Chair declared that, "The historic vote on June 12thclearly demonstrates that it is possible to stand up to entrenched power and win if people are determined and organized." Miller, an advocate for ranked choice voting for many years, added that, "an alternative voting method such as ranked choice voting, that eliminates the pressure to vote for an unwanted candidate for fear of getting a worse one, is crucial if people want to have real choices at the polls."

In addition to Maine, ranked choice voting has been used in municipalities across the nation from Berkeley, California (since 2010) to Takoma Park, Maryland (since 2007).

Ranked choice voting was not the only referendum overturned by the Maine State Legislature last year. In September 2017, Maine State House Representative Ralph Chapman spoke out against this "indifference" by the two major parties to the citizens of Maine, when they overturned "parts or all of at least three, so far, of the four citizen-initiated and –enacted major pieces of legislation from last November." Chapman added, "Only by increased awareness, and demands for accountability, will we be able to encourage our political system to be primarily responsive to the needs of our citizens." He ultimately changed his registration to the Green Independent Party and stood with them to support the referendum on ranked choice voting.

The Green Party of Pennsylvania is an independent political party that stands in opposition to the two corporate parties. Our 2018 candidates will promote public policy based on the four pillars of the Green Party: Grassroots Democracy, Social Justice, Nonviolence, and Ecology.

For further insight on the actions that the Green Party of Pennsylvania is taking to improve our democracy and serve the needs of people over profits, please visit www.gpofpa.org