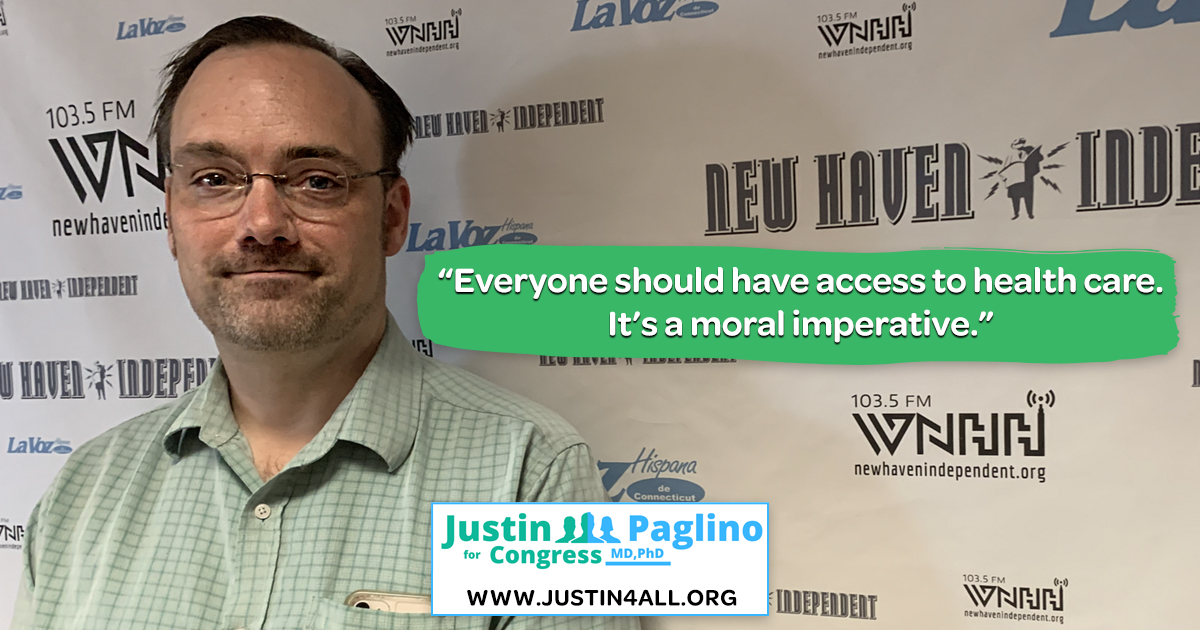 Justin Paglino is placing universal health care on the ballot again this November — with ranked-choice voting thrown into the mix. The two issues, he argued, are connected.

Paglino is citing those issues as top priorities as he launches a second bid for the U.S. Third Congressional District seat, which represents New Haven and Hamden (among other communities). he has a bunch of other issues in his tank as well.

Paglino, who is 48, has again received the nomination of the Green Party of Connecticut to take on the district’s Democratic incumbent Rosa DeLauro, who is seeking a 17th two-year term. Two other candidates are in the race, as well: Republican Lesley DeNardis and the Independent Party’s Amy Chai. (Click here and here to read about their campaigns, and here to read about DeLauro’s nominating convention last week.)

As in 2020, when he received 1.5 percent of the vote, Paglino, a 48-year-old medical researcher, is putting single-payer ​“Medicare for All” at the center of his platform.

“Everyone should have access to health care. It’s a moral imperative,” Paglino said in an interview on WNHH FM.

Asked about Vermont’s decision to implement, then abandon, single-payer health care, Paglino responded that the issue needs to be tackled at a national level in order to create enough scale.

If elected, he would sign on to the Medicare for All Act, he said. He noted the bill has over 100 cosponsors, not including Rep. DeLauro. (Click here for a previous story about DeLauro’s response to a Medicare for All protest outside her office.)

“My views represent a lot of people’s views. I want people to vote their values,” he said.

Often people instead don’t get to vote for candidates who truly represent their positions, Paglino argued. That’s why he sees health care as related to the broader quest to reform elections, including limiting the influence of large corporate donors (such as private health insurers). Instituting ranked-choice voting (RCV) would also present voters with more choices and strengthen democracy, he argued.

As a candidate from an environmentally focused party, Paglino, who grew up in Shelton and lives in Guilford, supports the Green New Deal. In the interview, he called for a ​“carbon fee and dividend” plan to fight global warning. The plan would implement a carbon tax on fossil-fuel emissions — and redistribute the proceeds to individual taxpayers to help recoup the short-term cost of transitioning to cleaner energy and away from ​“the planet-killing way of doing things.”

Paglino, who earned his PHD in Yale’s investigative medical program and spent 10 years of post-doc work on researching viruses, took the long-term view in addressing the Covid-19 pandemic, as well. ​“This is not the first pandemic. It will not be the last pandemic,” he noted. He called for more research into how to address pandemics, along with a rebuilding of trust in ​“experts” and ​“government” so society can more easily unite around taking action to save lives. As a start, he argued, we need a better democracy, one that would lead to representatives who ​“really represent us.”