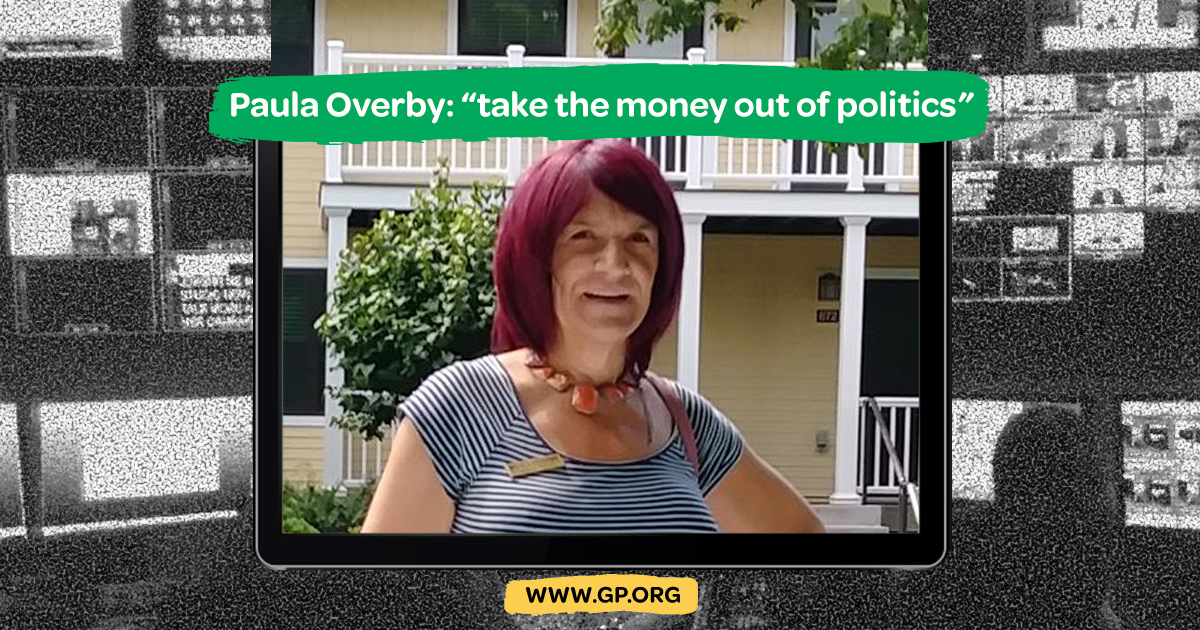 Paula Overby is a member of the working class. She's worked in manufacturing as a union member and she's been on strike. We are not rewarding hard work anymore. She understands the experience of working people with wages that can't keep up with the soaring cost of housing, education and health care. She knows we can do better. Paula is a graduate of the University of Minnesota with a degree in psychology and a second major in computer science. As a full time working mother of three, she had a successful career as a systems analyst with experience in quality assurance, data analysis and process design.

Paula has worked with minor parties since 2014. Her endorsement speech in 2014 focused on the corporate take over of America. She was talking about wealth inequality before Bernie Sanders was so well known. Since leaving the two-party establishment in 2014 she has focused on political process reform and building a political movement that can successfully challenge the politics of wealth and the incumbency lock of the two major parties.

Through two campaigns, Paula has maintained a consistent track record: engaging the public in political process reform and converting military spending to social investment. She focuses on health care and education, two of the fastest rising costs in America. Providing college education and relieving our young people of one-and-a-half trillion dollars in student debt is the best investment we can make in America's future. They will build the grassroots economy, essential to environmental conservation and restoring competitive market based consumer protections.

We are told we can't win, but we are winning and the mounting pressure against third parties is clear evidence of that. 70% of Americans say we need a third party: a major step in reforming a political system that has devolved into a virtual autocracy controlled by the corporate monarchy. Her campaigns for US House of Representatives went from 5% in 2014 to 8% in 2016. We see an untold number of write in votes in ambiguous two party challenges.

In Minnesota, home of the third party, the independent vote has grown steadily over the past several statewide elections. The third party coalition is capitalizing on that trend to move to major party status in 2018. That will give ballot access in 2020 to a new wave of candidates and create new incentives for disenfranchised voters to return to the polls, to regain a voice in our democracy.

We hope you will join us,
Paula