The conference was held at the American University Law School In NW Washington DC. It was an excellent facility with light filled rooms, an auditorium for around 500 and adequate unlimited meeting rooms that were lecture style and comfortable. It had adequate parking under the building that was free for the conference. The conference served box lunches and there were restaurants nearby. The main advantage was that there were at least two excellent hotels less than a 2 miles away for around $100 a room including the Courtyard Marriott with parking. I report this for future reference and use although I heard it was expensive and I am trying to get costs from Nick Brana who arranged it.

The crowd was predominantly young and white with a good age range, some seniors and people of color. Socialist Alternative (SA) was a sponsor of this conference and Kshama Sawant of Seattle called for a new party but it appeared that they were not there to build this coalition or a new party. The plenaries were about 200 people, the Friday night meeting was closer to 400 and most of the workshops were around 50 attendees.

I am attaching the program, which had workshops and plenaries that covered all the key topics from Anti-War, Standing Rock, Dreamers, to Racism and Press and Skills building. One was on Left Coalition Parties and they had invited Kevin Zeese from the Maryland Green Party for that panel. Araquel Bloss who appeared to be the main organizer (and key decider for speakers as she made decisions on her own) represented Progressive Independent Party (PIP) that favors broad third parties like many in Latin America. She is new to politics and an ex Bernie person who is for a third party down the line but qualified as Jill Stein stated, "Araquel also clarified that their "Progressive Independent Party" is not a party, but rather a movement to bring progressives together – underscoring they are not trying to start a new political party".

I spoke on the anti-war panel. The message of rebuilding the anti-war movement which I focused on seemed to strike a nerve and was well received. Many said they were aware there was no anti-war movement like in the 60's. Margaret Flowers spoke on the Single Payer Health Care panel and Robert Caldwell spoke on Progressive Parties, Prospects for Collaboration. Notable was a workshop on What is Democratic Socialism which included Dan La Botz who spoke for Democratic Socialists of America (DSA). Jill was scheduled for a Saturday workshop on Lessons from History – Movements that sought to Reform the Democratic Party but could not make. Dan LaBotz spoke for DSA and Kevin Zeese spoke for the Green Party. Since the Green Party had prepared the attached Go Green statement to the conference, we were able to hand them out at the sessions and at the table with various campaign material from the New Jersey and New York City election campaigns. This was critical for our intervention and was a great statement and well received. 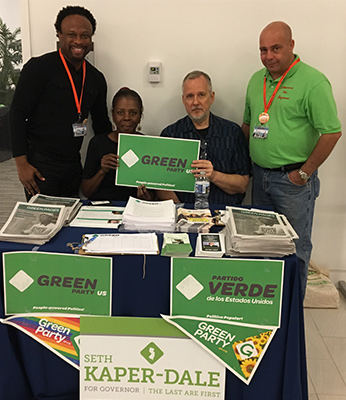 There were three plenary sessions: Friday night, Saturday morning and Sunday morning. Unfortunately Jill was not on the first tier for Friday night but was extremely well received during the Sunday plenary. She gave a unity speech stressing we want to work with the conference attendees. This plenary had two speakers added at the last minute that unfortunately cut into her time. However she got to answer questions and gave a powerful powerpoint presentation of very attractive Green Party candidates that was worth a thousand words in its impact. Jill and all Green Party (GP) speakers were typically applauded and well received.

However throughout the conference many who had been through the GP and had since left it expressed frustration with and many discounted it as an adequate third party vehicle. Some of the female organizers at the registration desk thought we had a problem of "branding" and a long history that could not be overcome.

I was able to deliver the message that the Green Party had prepared for the conference stressing we already have a viable third party and folks should join the us. I asked people who dismissed the GP to openly address problems they saw with it for valuable feedback. The fact that we would be open to constructive criticism seemed to be well received and appreciated. Numerous people told me they had voted Green and admired Jill's campaign, however many younger people did not have much information about the GP and others had the widespread impression that we were an environmental group and not a multi-issue party. This was critical information for the Outreach Committee to have so it can be addressed.

At the opening plenary Cornel West expressed angry disappointment that Bernie had not even been at his office to accept the petitions that had been collected. They thought it was great that they had 44,000 signatures. I pointed out to many that the Green Party of Connecticut had collected 67,000 signatures to get Jill and Ajamu Baraka on the ballot in Connecticut.

Robert Caldwell and I pointed out that the LeftElect Conference had been almost as big two years ago and continues its organizing. At the leadership meeting they expressed interest in joining with LeftElect to bring people together who were interested in Independent Political Action. Both LeftElect and this formation had some of the same and some different forces. Obviously they have organized the Sandernistas who are breaking with Bernie. The key thing about this conference was that the majority appeared to have given up any illusions about Bernie leaving the Democratic Party. Most of the comments were for breaking with the Democratic Party because it clearly cannot be reformed. This is an important development. The Draft Bernie Campaign and his rejection of their draft of him served to expose Sanders, instead of consolidating his support. That I suspect may have been Brana's intention from the beginning.

This group is interested in working with LeftElect and is open to considering a joint conference. Now we need to see if the steering committee of LeftElect is interested in collaborating with these younger people who have the energy to carry out the initial goals of LeftElect to foster and support independent political action. It would solve the problem of energy and personnel to do the work as these young people are excellent organizers with social media connections and skills.

I believe that the Green Party made a huge impact at the People's Convergence Conference and is the only organization in a position to offer these forces an alternative and a way forward. The Green Party has worked with LeftElect for two years now and should take a position of formal membership in the network to enable outreach to this key ex-Bernie constituency.