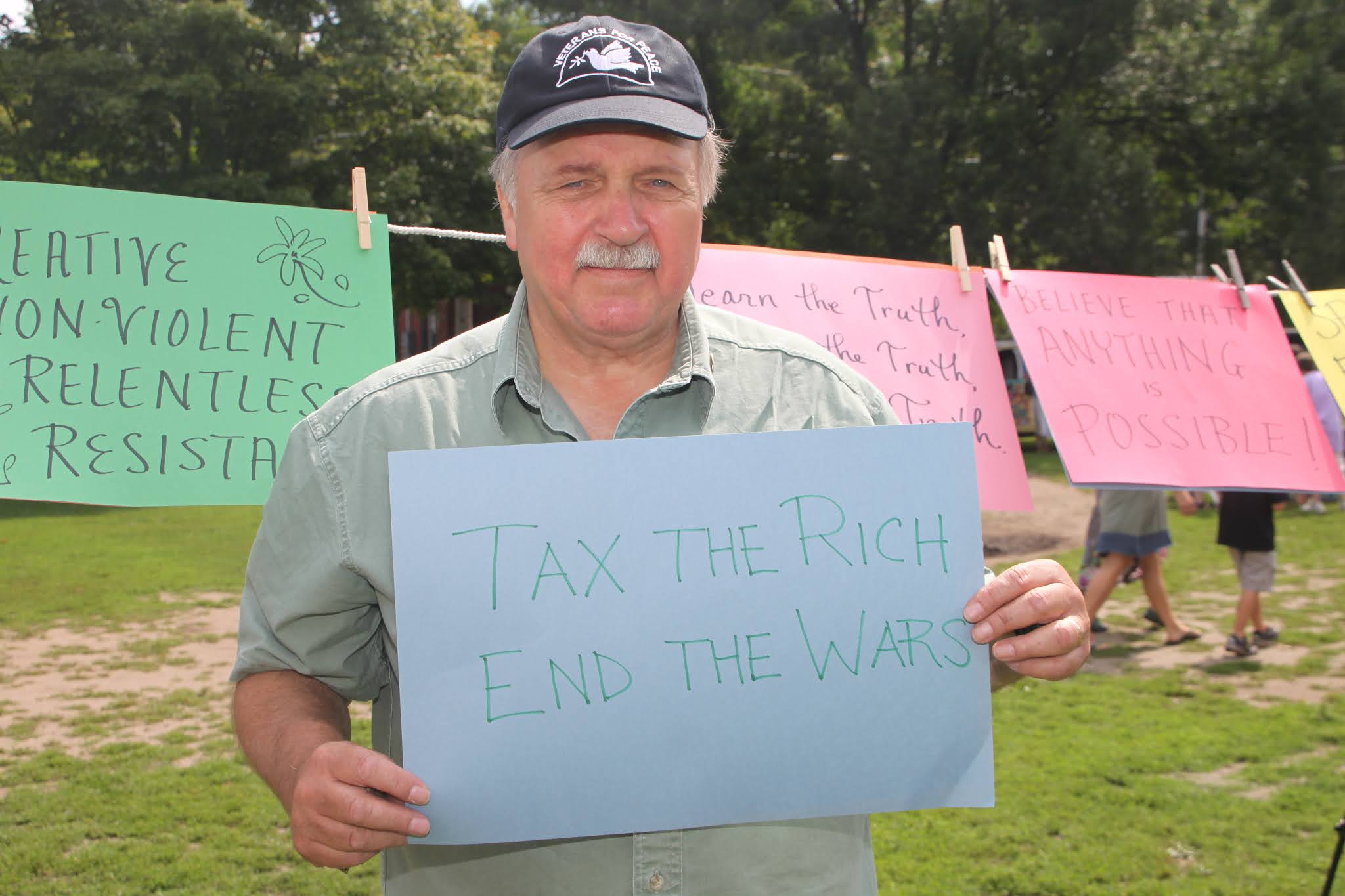 Peter Woodruff passed away on June 27. He lived in Arrowsic, Maine - just on the other side of the Kennebec River from Bath. Peter worked at Bath Iron Works (BIW) for over 30 years. Like most shipbuilders he did different jobs while there.

He was a longtime environmentalist in Maine and loved the ocean and all of its creatures. He was a gardener as well and enjoyed taking photos. He was also a strong union member who was active in past strikes at the shipyard.

Soon after the U.S. 'shock and awe' attack on Iraq in 2003, with the first cruise missiles fired from a BIW built Aegis cruiser (USS Cowpens), Peter began working with the peace movement.

In late 2008 Peter asked me to help him create a petition for workers at the shipyard saying they wanted to build offshore wind turbines. He and a couple fellow-workers gathered more than 800 signatures out of about 4,000 workers at the time. (BIW has at least four facilities spread out over 10 miles apart so it is real hard to reach all of the workers.) He was worried that he might be fired but it didn't happen.

Peter next wondered what he should do with the petition signatures and I suggested he request a meeting with the editor of the local paper. The meeting happened and the editor wrote a wonderful editorial congratulating Peter on his courage and vision.

There was no way Peter was going to get fired at that point.

Peter then ordered bumperstickers that read: 'Save BIW, Build Wind Turbines'. He handed them out to fellow workers who put the stickers on their vehicles and on their lunch pails.

In 2009 I interviewed Peter on my public access TV show called This Issue. You can watch it here. At that time he also wrote this Op-Ed for the local newspaper in our community. 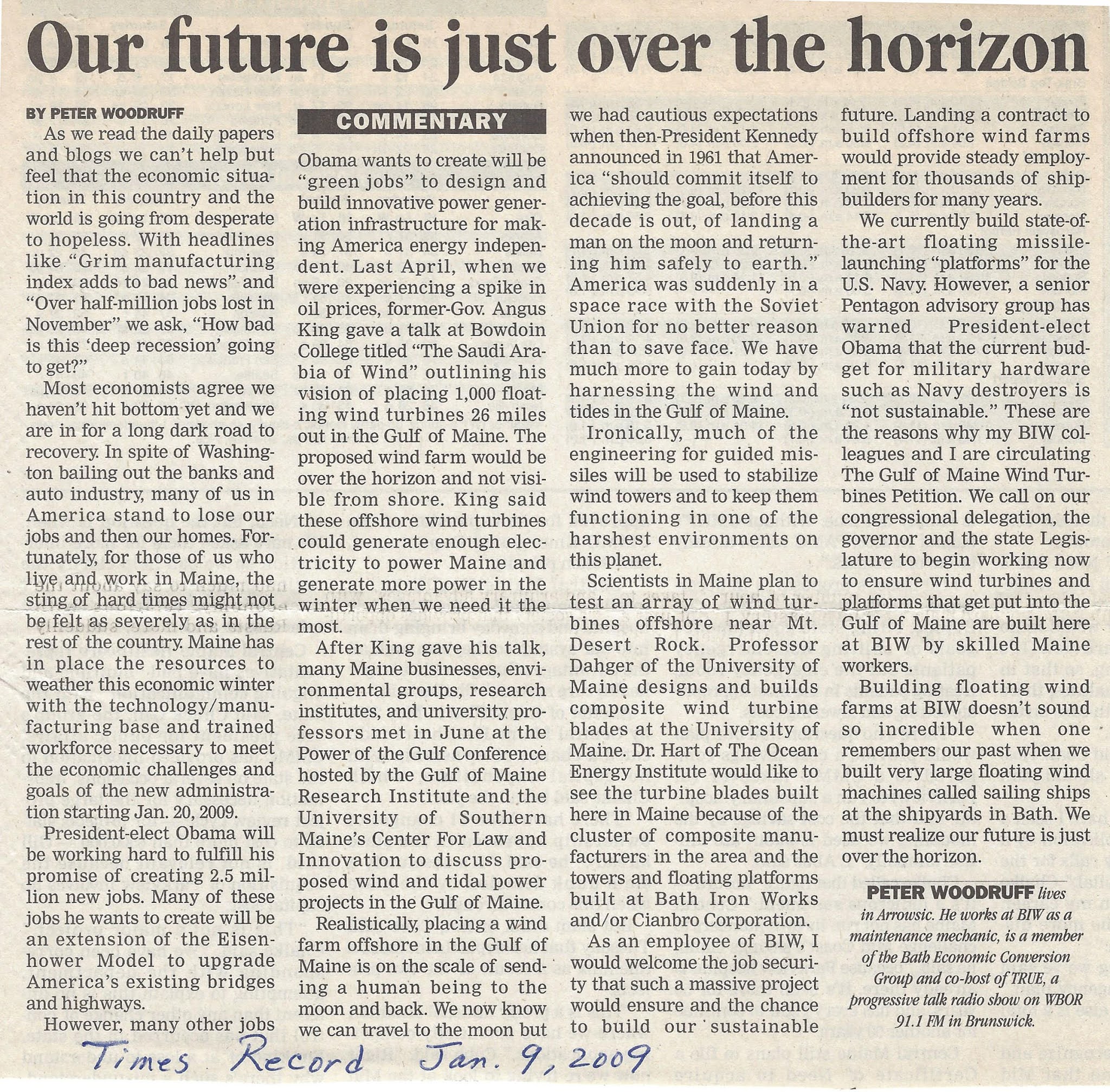 For six years Peter and I did a weekly radio show at the Bowdoin College station in Brunswick. The show was an hour long and we played political music and talked about various issues - including conversion of BIW to sustainable technologies like commuter rail, offshore wind turbines, tidal power systems and more. Studies show that building these types of systems rather than weapons for war would actually create more jobs.

We had to eventually give up the radio show because Peter was losing his ability to speak. Because of his work at BIW, Peter was exposed to metallic dust which he inhaled. This dust entered his blood stream and began to impact him.

Peter had his health insurance through the company-related HMO and he went to his doctor and asked to find out if his illness was work related. His doctor asked him, "Are you trying to hurt the company?" Peter said no, I just want to know what my problem is. Not long after, on a Sunday, the secretary of his doctor called Peter and told him the doctor no longer wished to treat him. Peter then went to talk with a labor lawyer to inquire if a class-action suit could be filed against the company. The lawyer told him that a 'financial settlement' could be extracted from BIW. Peter declined saying he was not interested in money, he instead wanted justice for all the workers at the shipyard.

Some years back Peter discovered that manganese mining in Africa was causing similar medical problems for workers. The cutting of steel at BIW, and inhalation of dust, was causing manganese poisoning for Peter. I once asked him if other workers at the shipyard had similar problems. He said yes, but no one ever talks about it.

In his last years at BIW he worked in the tool room where workers lined up every morning to check-out tools. There was a big bulletin board by the tool room so those waiting in line got a daily dose of political articles that Peter pinned to the board. Included there were so many copies of my blog posts that workers began to ask him if he was related to Bruce Gagnon. Peter again wondered if he would be fired for posting on the bulletin board but once again nothing came of it.

Due to this worsening condition Peter withdrew from meetings that he had always previously attended. But when there were protests he still came with his camera and took photos for us - many of which ended up on this blog.

Peter was like a brother to me and I will miss him terribly. We had many great times together.

In the end our community will miss this courageous man who dared to organize on behalf of peace and conversion of BIW while working inside the shipyard.

May we keep Peter's vision alive ...