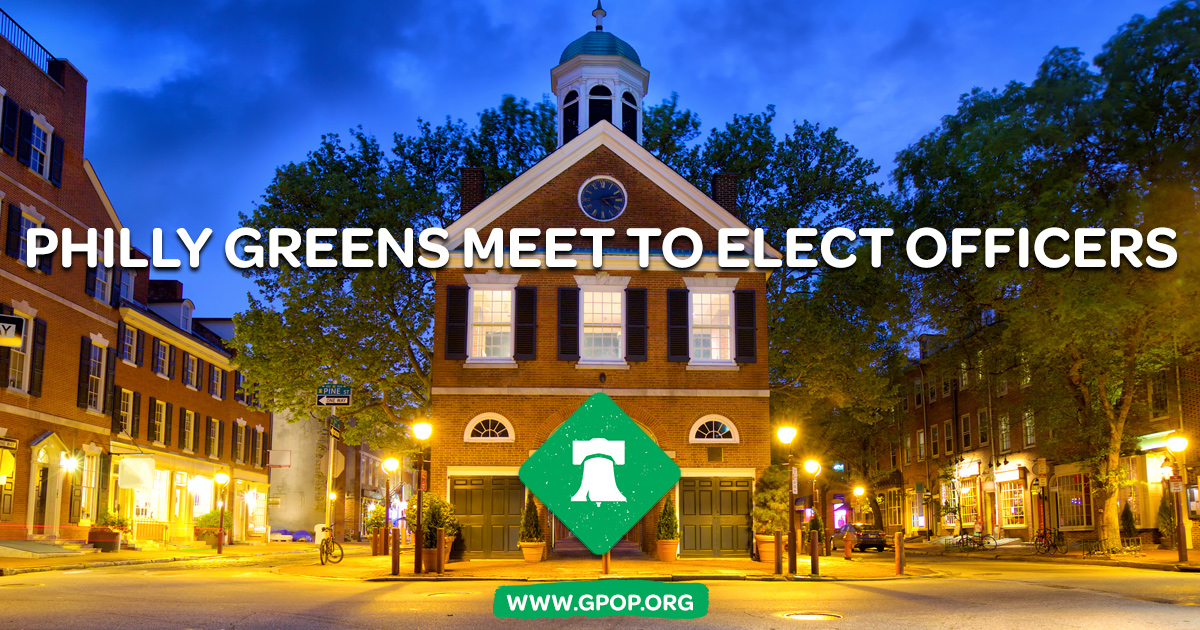 Don't forget to come to our next meeting! We'll be electing our 2018 City Committee. As always, this event is wheelchair accessible.

See below for current nominees and nominee statements. The nominations for all City Committee offices remain open until the beginning of the election at the February GPOP Meeting. If you would like to nominate yourself for the GPOP City Committee, please send your nomination to current Membership Secretary Chris Robinson (215-843-4256/[email protected]) as soon as possible.

This meeting is free and open to the public. All are welcome, all registered Green Party of Philadelphia members are allowed to vote on all issues.

After voting for Jill Stein in 2016, I decided to join the Green Party and help build the voice of the political left in Philadelphia. Since then, I have been elected as a Member-At-Large of the City Committee and have served on the Outreach and Communications Working Groups. I am now running for Chair to bring new leadership to GPOP. As chair, I want to increase the number of registered Greens and ensure we recruit and support more candidates for public office.

My name is Margie Neary and I'm running for Membership Secretary. I'm a life-long Philadelphian, a mother, a teacher, and a lover of learning. I became involved in the Philly Green Party in November 2016, directly after the election of Donald Trump, when I felt compelled to do my part to help build a viable third party alternative to the two-party duopoly. Since getting involved, I have helped organize events, collected signatures to help Greens get on the 2016 ballot, and handed out literature at my polling place on election day. I would like to see more women represented on the City Committee which is the main reason I accepted the nomination to run for Membership Secretary. If elected, I would bring positive energy, organizational skills and fresh ideas to the position. I hope to have your vote on Feb 22nd!

If you demand a better world as I do, the Green Party of Philadelphia (GPOP) can be your handle for steering the future in a better direction. I joined GPOP in 2004, and GPOP members have elected me to their City Committee since 2011. I am campaigning for re-election as GPOP Membership Secretary. I have worked to build GPOP following this 5-point strategy: Increasing GPOP membership and diversity, Running and electing more GPOP candidates, Achieving more positive awareness of GPOP, Closer ties between GPOP and other movements, and a GPOP structure more aligned with our goals. GPOP has made great steps forward on all these goals, and with your help we will continue to advance. If you vote for me, I will expect you to help me build the Green Party.

I am running for city committee at-large because I believe the Green Party can be a viable electoral opposition to the one-party rule in Philadelphia. Having served on the state steering committee last year, I know how to make decisions as a group and best represent the people who have elected me. I turned down a nomination at the state level with the intention of building a stronger base at the local level. Some things I would like to get done if elected would be to build on our infrastructure for communication with membership, recruit more members via increased outreach, build coalitions with organizations for issue-based campaigns, increase the number of registered greens in Philadelphia and recruit a candidate to run a viable campaign for upcoming elections. Thank you for your time, your consideration, and your vote.

My Fellow Greens:
My name is Olivia Faison, and I am an incumbent City Committee member of the Philadelphia Chapter of the Green Party. I was elected Inspector of Elections in my Philadelphia voting district, a role I have filled as a volunteer poll worker since 2008. I have been actively reaching out to the other Greens in Ward 60. I am asking for your support by voting for me in this upcoming election.

Hello friends and comrades. I am running for a second term as Member-At-Large to the City Committee. I became a member of the Green Party shortly after the Democratic National Convention was held in Philadelphia in 2016. I saw how far the corruption went, from the streets of Philly and the likes of Seth Williams, all the way up to the top of the National Democratic establishment. I decided to throw myself into the only nationally recognized all people-powered party we have and work tirelessly to help break the two-party system. So far as Member-At-Large I have helped plan events, gathered signatures for our candidates and begun work to overhaul both our email communications and our website. I'm currently working with PhillyCAM to produce a short video for to help us educate the public and increase our membership. My main goals going forward are to continue using my skills as a professional graphic designer and animator to increase the general public's knowledge of the party and invite more people into our party.

Greetings to all Green Party members, my name is Galen Tyler the current Chair and have been a Member-At-Largearge two terms before coming Chair. I've been a green since 2011 and lifetime independent voter. Building the green party in Philadelphia is something I want to see and help doing. I understand a lot of Philadelphia politic and I have worked with the state in a Green Party run for governor and on a national level for President. I would like to stay on the CC as a Member-At-Large to keep the growth and momentum going.

Have a great day!
Green Party of Philadelphia